Stellenbosch – Organisers of the Stihl SA MTB Championships presented by Subaru Cape Town/Novus Holdings in Stellenbosch on Saturday 18 July can look forward to a world class race village that will mirror the international standard of the cross country event’s course and help boost the overall vibe of the eagerly awaited national title decider.

While course builders add the finishing touches to the fresh course built into the mountains above Stellenbosch University, the tertiary institution has been hard at work creating a race village similar to those commonly experienced at European World Cups.

“A lot of work has gone into building a track that is both challenging yet safe for the riders as well as spectator friendly as possible,” explains WP MTB’s Bryan Strauss.

“A major element of this year’s national champs will be the incredible race village that will be created on Stellenbosch University’s sports fields,” he adds.

While South African course designers continue to receive praise for their production of international standard layouts, Strauss believes the overall setup of the event can sometimes let a local event down, a fate he is adamant this year’s nationals won’t suffer.

“Having been team manager for the South African team for twelve years, I have been to many World Cups and World Champs around the world and our courses are right up there with the very best, if not even better!

“It is that feel to our race villages that is however lacking; it must not only be a nice experience for the riders but for their families and the other supporters as well. 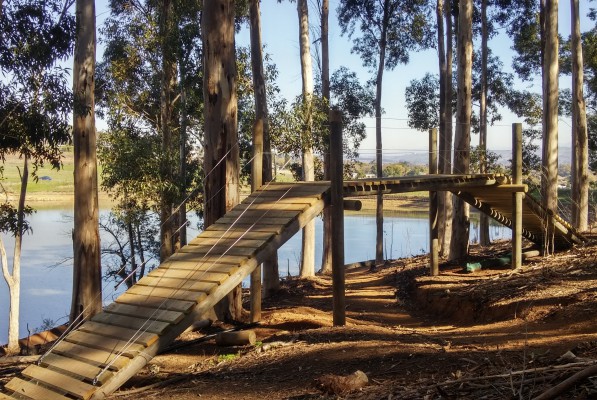 “Stepping up the standard of the area that services the event is a goal of Western Province MTB and something we really hope to take to a new level at this year’s SA Cross Country Champs!”

While the task may not be out of reach for the local organizing committee, it is one that does come with quite a hefty price tag.

“We want this event to be the event of the year and to create a race village similar to those in Europe is very expensive.

“This has only been made possible thanks to the contributions of title sponsor Stihl, as well as Novus Holdings, Subaru Cape Town, Stellenbosch University itself as well as Cycling South Africa and SA MTB.

“We’re racing in the heart of Stellenbosch so everything in terms of infrastructure is right there – grassed areas, hot showers, coffee shops.

“Stellenbosch University has been kind enough to allow us to put the race village on the university’s sports fields while they are also funding a lot of the building of the track as well.”

While their supporters continue to soak up the cycling carnival atmosphere, competitors will however have plenty else to focus on once they leave the comfort of the race village as they go in search of the coveted national title.

“Getting the balance right between making the course challenging yet safe for the riders is very difficult and I think Corrie Muller (track director) has really done a great job!” says Strauss.

“The course is approximately five kilometres long with over 200 meters of climbing per lap.

“The lap is split up into two halves with riders coming back to the race village area every 2.5 kilometres where there will be a double feed zone.

“The early part of the first half of the lap enjoys some open jeep track, some single track with some purposefully built crossover wooden bridges as well as some very cleverly built technical features.

“The second half of the lap sees riders presented with some rock gardens, spectacular jumps and some tough drops.”

While looking to stretch their legs on the fast downhill sections, riders will enjoy plenty of overtaking opportunities on the various climbs carefully positioned throughout the lap.

“There are some shorter, sharper climbs as well as one or two longer, more gradual climbs throughout the course with most being on open, jeep track.

Much of the work has already been completed ahead of the 18 July showdown however Strauss won’t be the only one hoping Mother Nature plays ball in a few weeks’ time.

“99 percent of the course building has been done, now it’s just the fine tuning and tweaking that left.

“We’re all holding thumbs that we don’t get a typical Cape winter’s day on race day with cold weather and heavy showers.

“The surface of the course is very rideable in both the dry and the wet, we’d just much prefer it to be dry!” he chuckles anxiously.

The Stihl SA MTB Championships presented by Subaru Cape Town/Novus Holdings take place in Stellenbosch with the Cross Country races being held on Saturday 18 July while the Downhill action unfolds on 19 July.

Entries for the event are now open and riders can enter at http://csams.cyclingsa.com/enter-an-event/mtb/2015—mtb—sa-national-championships-xco–dhi.aspx. Online pre-entries close on Tuesday 14 July and late entries will be accepted at registration. More information can be found at http://www.cyclingsa.com/2015-sa-mtb-champs/