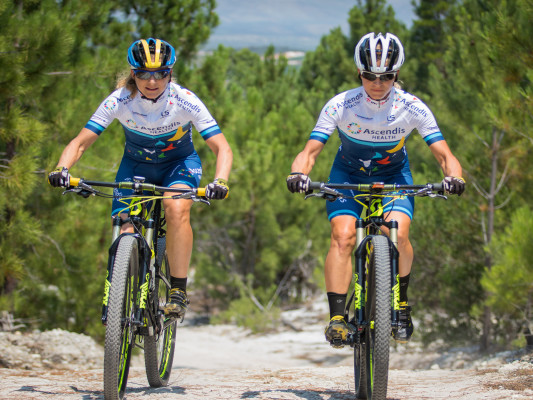 The formidable Team Ascendis Health pair of Jennie Stenerhag (left) and Robyn de Groot (right) will be out to repeat their 2014 win at the 2016 KAP sani2c starting from 12-14 May. CAPCHA Photography/ Gameplan Media

Himeville – A health scare to Jennie Stenerhag forced her and partner Robyn de Groot to withdrawal from the 2016 ABSA Cape Epic however the duo have confirmed they will be out to replicate their 2014 victory when they take on this year’s KAP sani2c after the Stenerhag was given a clean bill of health following heart surgery recently.

Despite the disappointment of the Cape Epic, Stenerhag has put it behind her and is firmly focused on being in top form for the three-day sani2c from Underberg in the Southern Drakensberg to Scottburgh on the KwaZulu-Natal South Coast.

The Team Ascendis Health star has been in recovery following her surgery and has been waiting patiently to begin her journey back to full fitness, despite the Swiss star cautious not to commence with flat-out training just yet.

“I managed to go for my first ride since the operation on Wednesday,” the 41 year-old said. “The operation all went well and my ride was surprisingly good but sani2c is still over a month away so I am not putting any pressure on myself to get into top shape too quickly.”

“I’m just taking it day by day and although I plan on riding every day, if I don’t feel up to it I’m not going to put pressure on myself to ride.”

The recovery process is a gradual one with Stenerhag eyeing a return to competitive racing in a few weeks’ time.

“We have a Nissan Trail Seeker Western Cape event on 7 May – which will be my first race back – and it will be the week before sani2c, which I think should be more than enough time to get myself back into good form,” she explained.

Stenerhag forms a formidable duo with De Groot, who had to pull out of the 2015 edition of the sani2c due to post viral fatigue syndrome, and the pair will hope that they are on top of their game when they leave Glencairn Farm.

“I had worked out that before this year’s Epic, Robyn and I had ridden in nine stage races together – that’s a lot of riding and it means that we have got to know each other really well.

“We are similar sorts of riders so we share the same strengths which I see as a positive to our partnership.

“We have been through a number of ups and downs and we have become really good friends on and off the bike.

“Robyn has been in great form this year and with the South African Marathon Championships being her next target, she should be hitting top form by the time we get on the start line at the sani2c,” she added.

The KAP sani2c throws a number of obstacles at the riders throughout, including a back-breaking climb out of the uMkomaas Valley to end the second stage. Stenerhag however singles out the first day as being her toughest challenge.

“I battle with the altitude on the first day, which makes the opening stage of the race the most difficult for me!

“I always feel that the race gets easier and easier as we get closer to the sea – it might just be the mind-set but it helps me get through!” Stenerhag said.

As the elite women’s entries are finalised, the aim for Stenerhag and De Groot is to keep themselves focused on their own race as opposed to worrying about what the other ladies pairings are doing.

“We just want to control what we can control and concentrate on our own race,” she mentioned circumspectly. “The goal is definitely to win the title but we are not going to do that if our attention isn’t in the correct place so keeping that maintained focus is going to be of vital importance to us.”