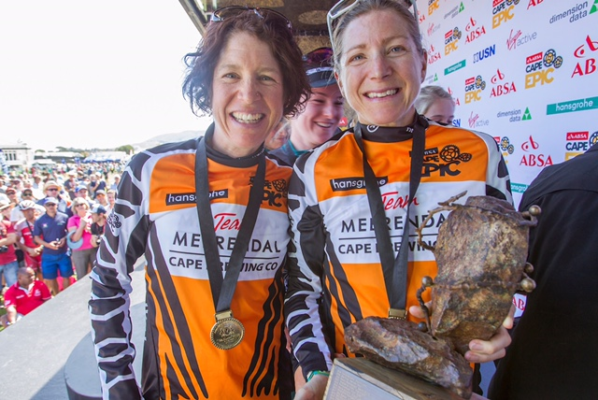 A year after having heart surgery Jennie Stenerhag wept on Sunday as she and Esther Süss won the Absa Cape Epic Women’s category.

“I can’t stop crying. I am so happy … it is just unbelievable,” said Swede Stenerhag. “I don’t know what date it is today, but I think it is four days until exactly a year after my heart operation.”

Stenerhag pulled out of the race while lying second in 2016 and then had surgery to correct an irregular heartbeat.

“Since that day my biggest goal was to try and come back to win this race,” said Stenerhag. “To pull it through is something completely unreal. I cannot believe that I am standing here as the winner.”

Experience and consistency were key to that win when Süss from Switzerland and Stenerhag crossed the line as third women’s team at the final stage to Val de Vie Estate near Paarl, but having done enough to claim a convincing victory overall in the Hansgrohe Women’s category.

“It has been a tough week. It has not been an easy week,” added Stenerhag. “But Esther and I have been in such good form that I have not found it as tough as I expected. I think that was because we have been so good this week that it did not seem so hard.

“Obviously (Spitz and De Groot) had some bad luck, but on the day they had the biggest bad luck we had ridden away from them, so I want to believe we could have beaten them anyway … and staying on your bike is part of the game.

“I think we won by keeping everything smooth and consistent. We just kept calm and never thought we could win until now when we crossed the line. I think that helped because we never stressed about anything – just kept it smooth.

“It is a fairytale. I put so much into it. Everything I have done for the last three months has been to just with this as a goal. It is just amazing.”

Süss was ecstatic about the win.

Stage 7 from Grabouw to Val de Vie was a tense three-way battle with the three podium finishers locked in a struggle for the stage win. De Groot and Spitz, after their bad luck the previous day which saw them lose second position overall following a broken handlebar, were probably the most motivated and just edged Strauss and Last in the sprint, with the race winners crossing the line third.

“Yeah, we did not allow the troubles to get us down this week,” said a disappointed De Groot after the finish. “We did not give up and focussed on the stage win today, and it worked out.”

“Our riding has been good all week but we just had bad luck, but that is sport and you have to pick yourselves up from those moments and to experience these things. I think Sabine and I will never forget this week.

“We have ended up being very good friends and get on very well. We looked at each other last night and said shall we come back next year. I think we need a few days and then we will probably commit to it.”

In the Virgin Active Mixed category the Scott-Sram Nextlevel duo of 22-year-old Rio Olympic Champion and 1996 world champion, 47-year-old Thomas Frischknecht were in a class of their own.

On Sunday they finished off a clean sweep of eight victories in eight days as they cruised to a massive 65-minute win overall over Grant Usher and Amy Beth McDougall (joBerg2c-Valencia), with Johan Labuschagne and Catherine Williamson (RBI Tech – Mitas) a further 45 minutes a back in third.