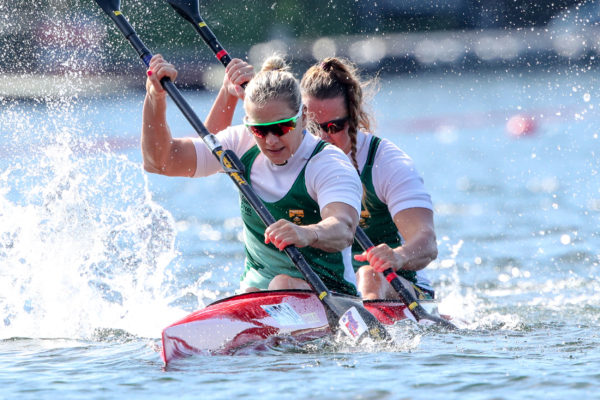 The sprint pair of Bridgitte Hartley (front) and Donna Hutton (back) will fight it out at the Africa Games in Morocco in the women’s K2 200m and 500m as well as joining Esti van Tonder and Nosipho Mthembu in the women’s K4 500m. http://canoephotography.com/

Durban – A strong team of eight paddlers have been selected to represent South Africa at the African Champs in Morocco from 16 to 31 August with a clear view of challenging for Olympic qualifications places that are available.

After clearing the precise details with SASCOC, the results required to secure qualification for next year’s Olympic Games in Tokyo through continental qualification have been agreed, and the sprinters can now set their sights on what needs to be done at the ICF Canoe Sprint World Championships in Szeged before they head to Rabat for the Africa Games.

To be eligible for selection for Team South Africa to the Tokyo Games the paddlers involved will need to secure a specific result at the World Championships, and then win respective events outright at the African Championships a week later to secure their qualification.

For the women’s 500m K1 and men’s 1000m K1, the threshold result is a 4th in the World Championship B final – effectively in the top 13 in the world while for the men’s and women’s 200m K1 races the minimum result required is a third place in the B final.

“The criteria set by SASCOC are open and perfectly fair,” said Canoeing South Africa president Kim Pople. “The athletes now know clearly what is expected of them, and they can now focus on delivering the results they need.

The charge will be led by sprint queen and 2012 Olympic bronze medallist Bridgitte Hartley, who will team up with Donna Hutton in their K2 for the event where they will take part in the K2 200m and K2 500m events.

Esti van Tonder will take part in the K1 200m and the K1 500m races at the African Games and will take a lot of international experience with her into the continental competition.

Hartley, Hutton, Van Tonder and Nosipho Mthembu will then team up for the K4 500m race which will only be a once-off final and not include qualifying races.

Ace 200m sprinter Crisjan Coetzee has had his sights set on the vital 2019 qualification season for some time, and after tasting success on the World Cup circuit earlier in the year, he has arranged training camps in Europe with some of the top 200m sprinters to sharpen up his chances.

He will be representing South Africa in the K1 200m at the African Championships and will go in with some solid early season form under his belt.

Louis Hattingh will be taking part in the longer events, competing in the K1 1000m as well as joining forces with Jarryd Gibson for the K2 1000m.

There will also be a men’s K4 in action at the Games with Coetzee, Hattingh, Gibson and Alex Masina representing South Africa over the 500m shoot-out.