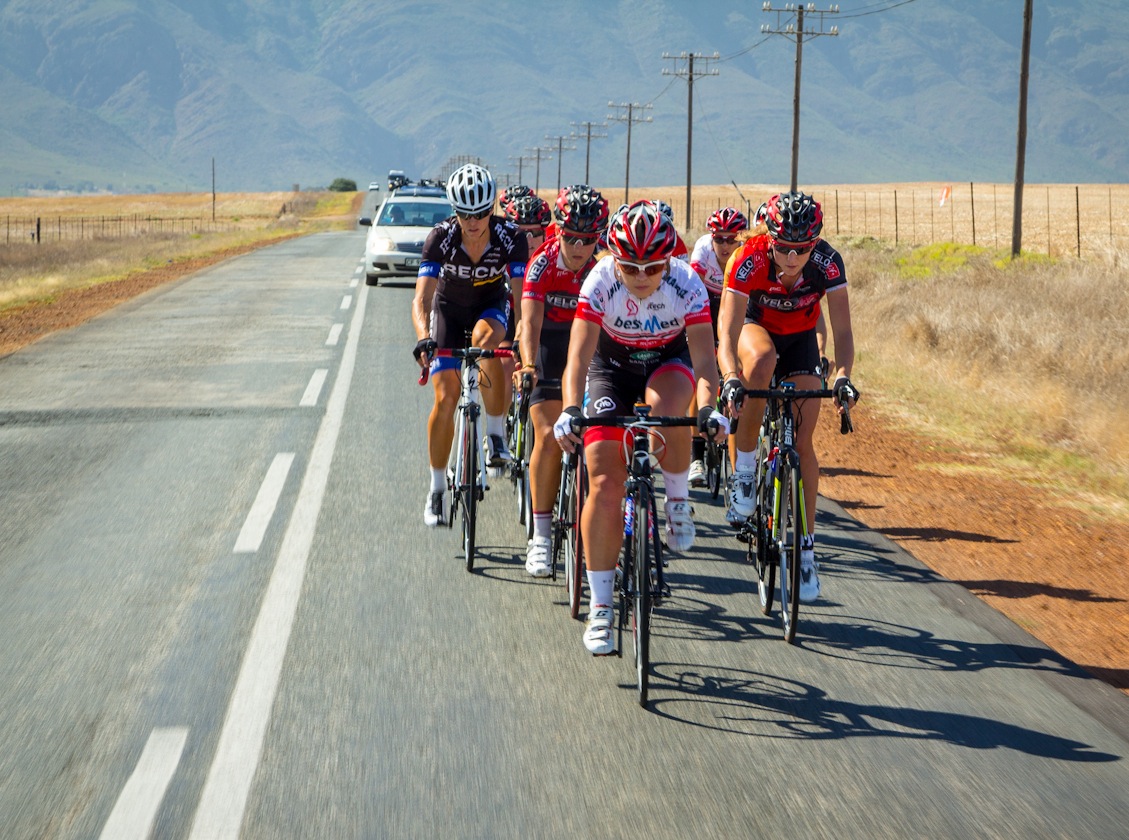 A strong women’s field is expected for this year’s Bestmed Tour de Boland, presented by Pinarello, from March 2 to 6. Photo: Capcha

African road championship silver medallist Lise Olivier will be looking for a second bite at the cherry in next week’s Bestmed Tour de Boland, after missing out on the overall title by a mere three seconds last year.

Olivier will be part of a strong women’s field for the five-day tour, presented by Pinarello, from March 2.

Last year, the Time Freight E rider outpaced eventual champion Ariane Kleinhans of RECM in a dramatic finale on Franschhoek Pass but it was not enough to secure the yellow jersey.

“I love that climb and knew that it would be a hard battle to the top,” said Olivier.

“I never expected to drop Ariane on the lower slopes, so it was actually a bit of a surprise to take the stage win.”

She said her team’s strategy was always to race positively and go for the stage wins, of which they claimed two last year.

“We didn’t have time-trial equipment at the tour and that did set us back slightly. We knew this going in, which is why we targeted the stages instead of the overall title.”

Olivier said the change of route, which now sees riders start and finish the tour in Paarl, would set up a more consistent daily battle over the five days.

“I think it will be a very interesting tour this year. As we are racing with the men, a couple of stages will most likely finish with a bunch sprint.”

She named Bestmed-ASG-Multihull’s continental track champion Maroesjka Matthee as the danger woman in these situations.

“Her young teammate Kim le Court, who won the Carnival City road race this past weekend, is also one to watch on the flatter stages.”

Should the men in the group decide to race hard and split the bunch, Olivier said stage-race specialist and Cape Epic champion Kleinhans would definitely be in the mix.

Seasoned professional and multiple Cape Town Cycle Tour winner Anriette Schoeman, who rides in the colours of Africa Silks-Bestmed, could also bring her experience to bear in the bunch and shake up the larger teams’ tactics.

“We are a small team this year, so we’ll probably be looking to the other teams to make the racing for the most part,” said Olivier, who will ride alongside national U23 cross-country champion Ashleigh Moffatt.

Olivier looks to be in good form after winning the recent ASG Berge en Dale and helping her country to a gold medal in the team time-trial at the African champs.

With licenced riders now green-lighted to participate in the Cape Town race, the Tour de Boland will be the final testing ground for SA’s top pro contenders.

“There are not many road tours in South Africa so any multistage race is high on our priority list,” said Olivier, who also heads up Cycling SA’s women’s commission.

“Tours are such an important part of the sport and we do our best to make it to the race as a team. It would be great if the women could have their own start in 2016, which would push this tour to the top of most riders’ priority lists.”

She said the level of competition at the continental championships earlier this month had showed the progress women’s cycling had made in recent years.

“It was an emotional experience seeing 30 women from 16 countries on the start line. The level of women’s cycling locally and in the rest of Africa has changed dramatically in the last year or two.”

Another mountaintop finish awaits the elite field on the dirt road up to the Taal Monument in Paarl on March 6.