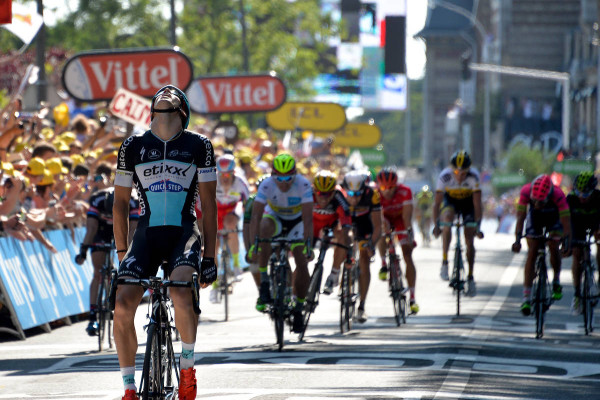 Mixed feeling for Etixx-Quick Step in Le Havre: Zdenek Stybar anticipated the bunch sprint to win stage 6 while race leader Tony Martin crashed in the last kilometer and crossed the line obviously injured and likely to pull out of the Tour de France. Daniel Teklehaimanot made history for Africa with taking the polka dot jersey.

188 riders started stage 6 in Abbeville. Michael Albasini (Orica-GreenEdge) was a non-starter due to a fracture in his upper left arm. Following a first attack by Luis Angel Maté (Cofidis) who was reeled in at km 3.5, Perrig Quémeneur (Europcar) initiated the main breakaway of the day as he wasn’t afraid of going clear for the third time in four days, every second day indeed. Daniel Teklehaimanot (MTN-Qhubeka) and Kenneth van Bilsen (Lotto-Soudal) were prompt to react and accompany him in a long lasting escape. The trio got a maximum lead of 12.30 at km 28, after which the Lotto-Soudal team of green jersey holder and double stage winner André Greipel decided to set the pace of the pack. 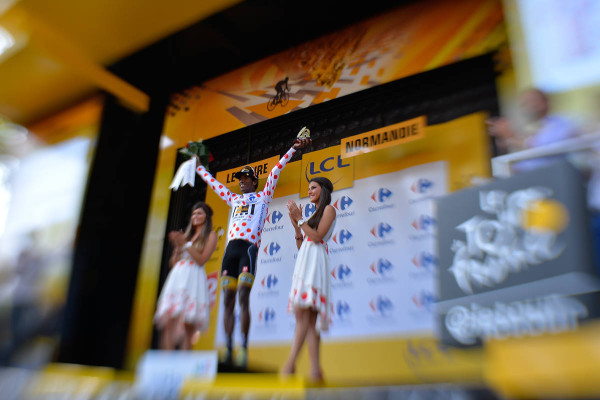 Teklehaimanot in the polka dot jersey

Daniel Teklehaimanot (MTN-Qhubeka) who already won the King of the Mountain competition at the Critérium du Dauphiné last month went on the hunt for the polka dot jersey. He claimed the first two points awarded atop the category 4 climbs of Côte de Dieppe (km 72) and Côte de Pourville-sur-Mer (km 77.5) where he outsprinted Van Bilsen. Lotto-Soudal and Giant-Alpecin combined forces to chase the trio down. Passed the intermediate sprint at Saint-Léonard (km 145.5), Thomas Voeckler (Europcar) tried to bridge the gap of 50 seconds to the leading trio but failed to do so and was brought back by the pack 37km away from the finish. Teklehaimanot, Van Bilsen and Quémeneur managed to stay away until the third category 4 climb with 29.5km to go. The Eritrean won again and thus made his dream come true as he was a fan of the polka dot jersey since his childhood.

Martin, Nibali and Quintana on the ground

Van Bilsen attacked with 12km to go. Quémeneur and Teklehaimanot were reined in just after the 10km to go mark. Van Bilsen was caught by the peloton with 3km to go. Race leader Tony Martin crashed in the uphill finish on his left shoulder. He took many riders down, including GC favorites Vincenzo Nibali and Nairo Quintana but they were all classified with the same time as the accident happened in the last three kilometers. Cyclo-cross specialist Zdenek Stybar, also from Etixx-Quick Step, rode away solo in the last 500 metres and claimed his first stage victory at the Tour de France.