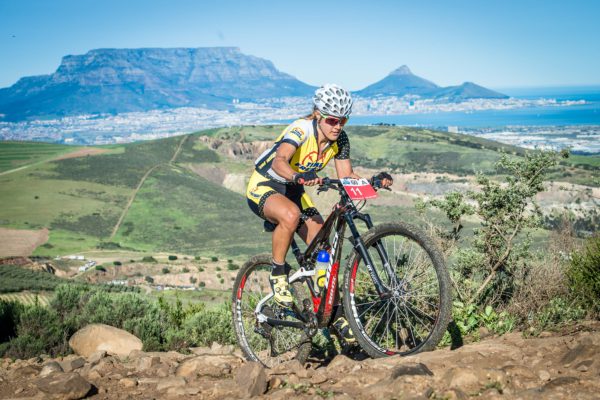 The second annual Fedhealth MTB Challenge kicked off at the majestic Meerendal Wine Estate on Sunday, 04 September 2016. Erik Kleinhans claimed gold in the men’s race in a time of 02 hours 36 minutes 06 seconds, while Vera Adrian was the lady to beat crossing the finish line first in 03 hours 19 minutes 30 seconds. Seen here: Vera Adrian in action on the day. Photo Credit: Tobias Ginsberg

Close to 1300 mountain bikers lined up to experience the best that the Durbanville Winelands has to offer including spectacular MTB routes, clear skies and magnificent views of the ocean, Robben Island and Table Mountain.

Competition was rife in the men’s 65km Fedhealth MTB Challenge with Erik Kleinhans, James Reid and Konny Looser forming part of the lead group. Kleinhans admitted to being surprised by the competition on the day. “I didn’t expect there to be so many strong riders. We were still part of a big group of riders when we reached the first big climb. James increased the tension a bit, Konny and I followed. We worked together until the second last climb at Dorstberg where James launched a big attack. He was then 10 seconds in front of me and Konny 10 seconds behind me. James overexerted himself on the Quarry climb though. Konny and I passed him. The route was lovely. The climbs weren’t too major, the single tracks fun and the downhills fast.” Kleinhans claimed gold in a time of 02 hours 36 minutes 06 seconds. Konny Looser came in second, while James Reid finished third.

According to Looser, the 65km route was amazing. “It wasn’t too long. I could still concentrate towards the end. It was fun. Finishing second to Erik feels good. I just came back from a long off season in Europe, so I am happy to be able to hold the wheels of the fast riders.”

The women’s 65km Fedhealth MTB Challenge title was clinched by Vera Adrian. According to Adrian, the race was harder than expected. “There was a lot of climbing, but the route was super, real mountain biking. Katie surprised me. She caught me on the last climb. I had to work hard to pass her. This was definitely my hardest finish to a MTB race. It’s always nice to win.” Adrian secured an impressive finishing time of 03 hours 19 minutes 30 seconds. Katie Lennard came in second, while Ila Stow finished third.

Courteney Webb was the lady to beat in the 35km Fedhealth MTB Challenge claiming victory in a time of 02 hours 09 minutes 37 seconds. Allison Morton came in second, while Liezel Jordaan finished third.

Danielle Barnard was the first lady home in the 15km Fedhealth MTB Challenge in a time of 39 minutes 25 seconds. Erin Jones came in second, while Sadi Grooduih finished third.

“Another Fedhealth MTB Challenge is now done and thoroughly dusted – and I have to say it was better than ever,” says Jeremy Yatt, Principal Officer of Fedhealth. “The weather played its part, and so did everyone who helped to make the 2016 edition the most memorable MTB Challenge yet. The attendance was great, the entertainment fantastic, everything was well-organised and it was evident that a great time was had by all – from the serious competitors to the families who got to spend a great day out together.

We’d like to offer our sincere gratitude to everyone who did their bit to make it such a special weekend.   We look forward to seeing you all next year!”

With an array of food stalls serving up mouth-watering treats combined with Meerendal’s award winning wines and live music, participants and spectators could enjoy a relaxing Sunday afternoon outdoors in good company.