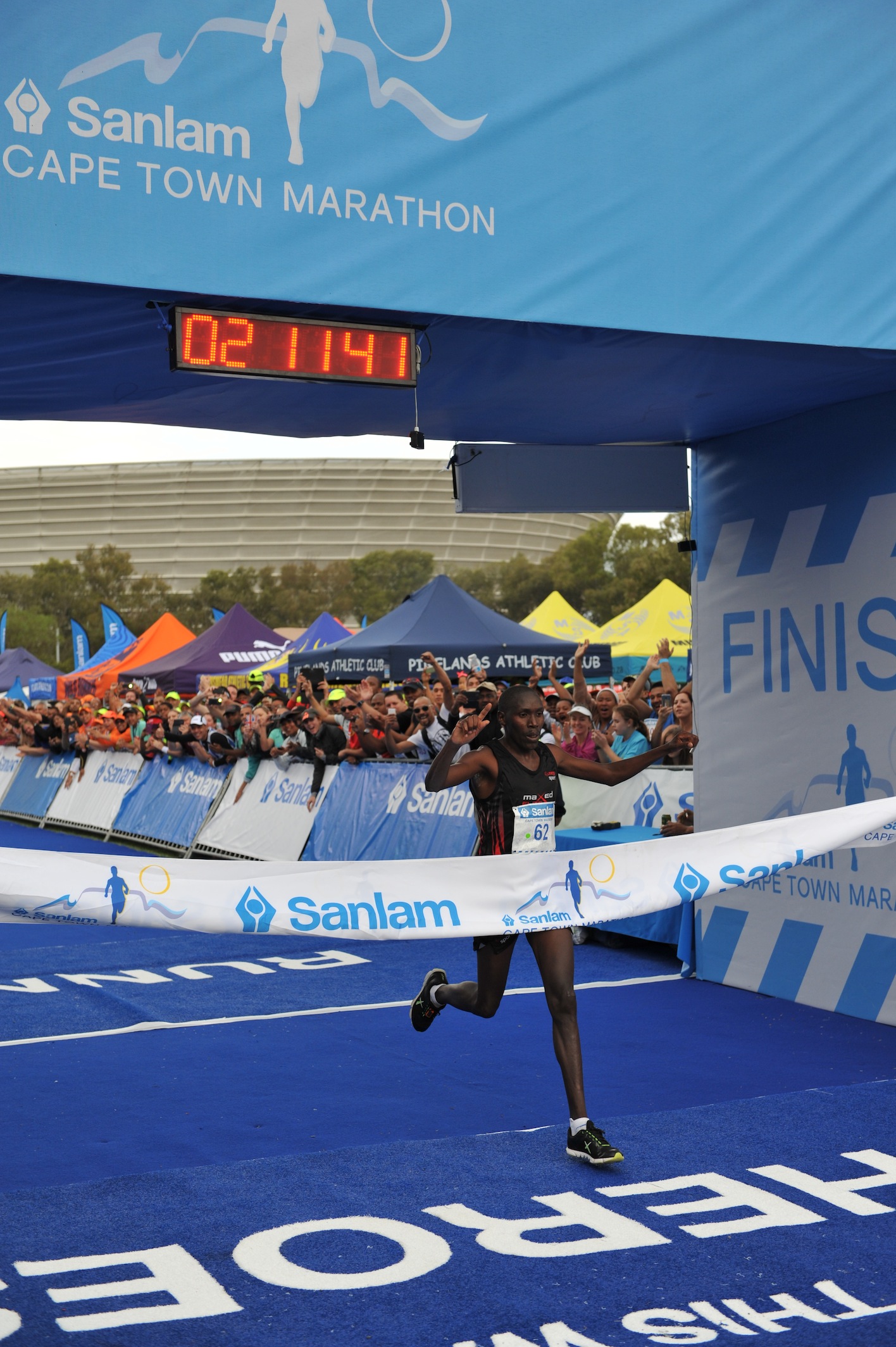 Shadrack Kemboi from Kenya proved to be the strongest athlete on the day, despite local weather conditions, winning the second edition of the relaunched Sanlam Cape Town Marathon, which took place today.

Cape Town, 20 September 2015 – Shadrack Kemboi from Kenya proved to be the strongest athlete on the day, despite local weather conditions, winning the second edition of the relaunched Sanlam Cape Town Marathon, which took place today.

But the South Africans were hot on his trail, with Lungile Gongqa finishing second and Michael Mazibuko finishing third. Isabella Ochichi from Kenya earned a superb victory in the women’s race.

With local humidity at between 70-80%, the East African winners battled somewhat, while the South Africans took full advantage of the overcast weather, putting in an excellent performance behind their international counterparts, at the IAAF Silver Label event.

“I always wanted a marathon victory, and I believe that it would come in Honolulu, Hawaii in 2014, but I got it today on my home continent – Africa – and I couldn’t be happier,” said Ochichi.

The 42km race boasted a large mass field of 5728 participants in only its second year, in which it is aiming to achieve the IAAF’s coveted Gold Label status, another first for the African continent. 4.5% of entries were from outside of South Africa, with 51 countries represented at the race. 62 entrants came from the USA, 21 from Germany, 20 from the UK, followed by smaller numbers from Sweden, Kenya, Canada, Ethiopia, Namibia, Zambia and Japan.

“We are delighted with these performances. It proves this race truly has the potential to become one of the most spectacular marathons in the world,” said race ambassador Elana Meyer.

“African runners are being given an opportunity to compete at the highest level without travelling to Europe or the United States, and this was one of our goals when the race was relaunched last year.

“We are hoping the International Association of Athletics Federations (IAAF) will see as much value as we do in this race by awarding us Gold Label status. The Sanlam Cape Town Marathon will only get bigger and better.”

Yegs Ramiah, Chief Executive: Sanlam Brand congratulated the winners and all the participants, adding: “As headline sponsors, we are excited about the success of yet another edition of this uniquely African and prestigious marathon. In the past our top African runners had to travel the world to compete for gold but now the competition has come to us. We take pride in the role we have played in creating the unique opportunity for these athletes to run an IAAF-accredited marathon right here on African soil. It remains the only carbon neutral event of its kind in Africa, hosting some of the best athletes from over 55 countries across the world. Africa is our home and the Sanlam Cape Town Marathon is our race.

“We also had a lot to offer supporters and the small businesses that participated this year and charities will once again benefit. Sanlam is really proud to be part of this unique event and we now look forward to the results of our bid for the IAAF Gold Label Status.”