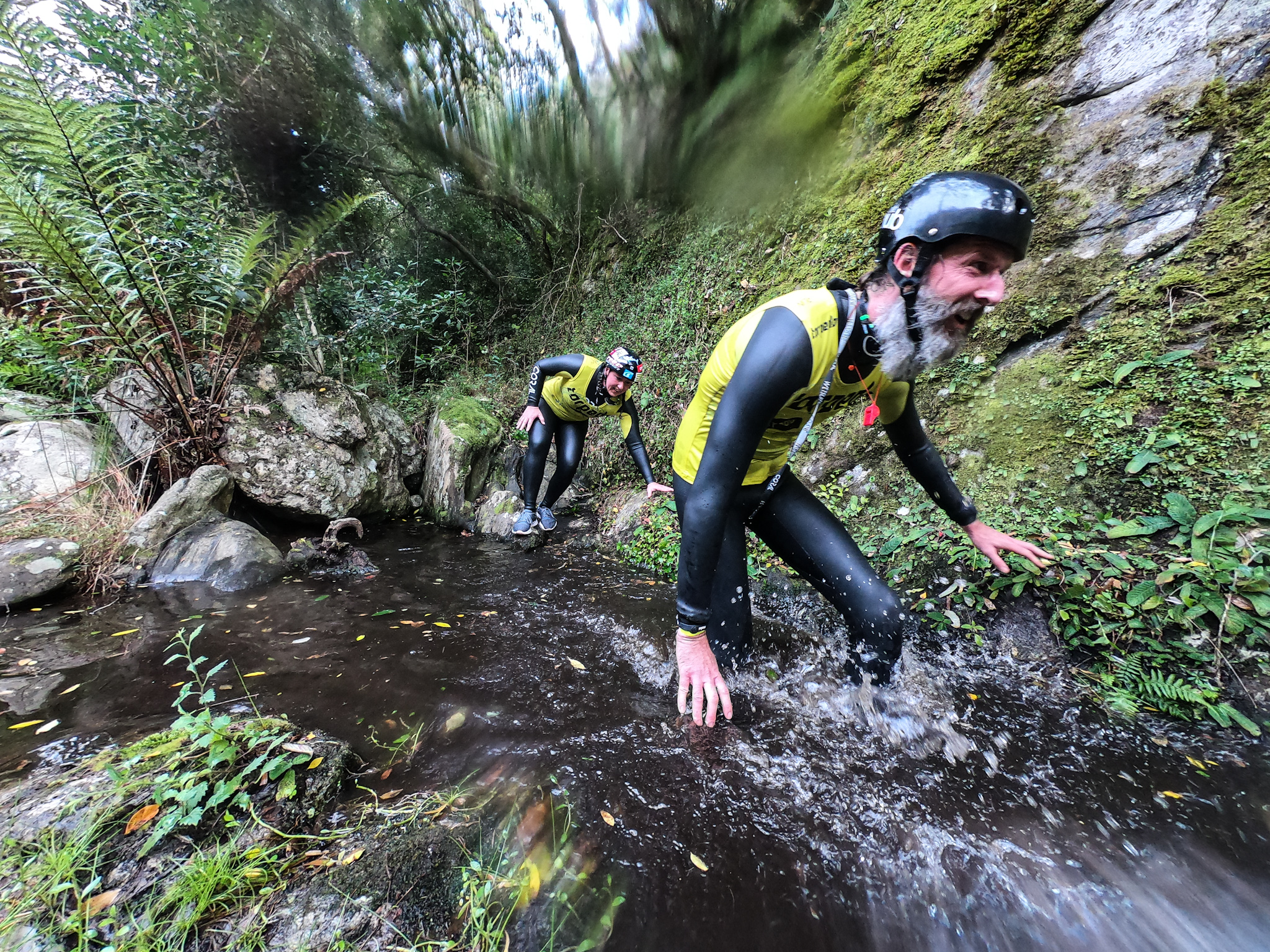 Seamus Allardice took part in his first SwimRun in Wilderness on the 13thand 14thof September. The concept of swimming and scrambling (or Swambling) down the Kaaimans River was the hook, but the Torpedo SwimRun Wild provided far more adventure than just those four early kilometres.

What is a SwimRun you may ask?

The answer is simple, it is exactly what it says on the tin. It’s a sport in which you swim and run, without any transition or change of apparel, your way along a designated route. The routes can be ultra-long, like the original ÖTILLÖ SwimRun in Sweden, or short and manageable like the Torpedo SwimRun Val de Vie. Each event though features the same mix of adventure and competition, with athletes carrying everything they need with them throughout each run and swim.

Depending on water temperatures SwimRuns can be undertaken with or out without wetsuits. Other than that, the gear choices are pretty flexible. Most Torpedo SwimRun Wild competitors raced in trail shoes, though some chose to take part in surfing booties or water shoes as those provided more grip on the mossy rocks of the Kaaimans River. Some had invested in lightweight and quick draining SwimRun specific shoes even.

Torpedo provides high visibility bibs and swimming caps, which most people chose to combine with swimming googles for the swims (which they carried for the runs). A popular addition to the race day gear was a pull buoy, which athletes modified so that the buoy could be strapped to their leg while running and rotated into place between their legs to provide additional buoyancy while swimming.

The final bit of gear, which was the only thing I would have liked to have utilised too, are hand paddles. A number of more experienced SwimRunners made use of hand paddles to speed up their swims and in hindsight they would have been very beneficial. As a strong but not fast or frequent swimmer I found my fingers got tired towards the end of the long swim legs and I could have done with the added paddle power.

All about the Fun

The Torpedo SwimRun Wild is all about the adventure and the fun. It starts with a, six-kilometre-long, Friday afternoon Prologue in and on the banks of the Touws River. With the race village set up at SAN Park’s Ebb and Flow North Campsite the scene for the event was idyllic. We set out to explore the deep indigenous forests on the Prologue route which features five kilometres of running and a kay of swimming, all in the river. Taking part in teams of two we set out, many of us on our first SwimRun experience, into the wild. Beautiful forest singletracks led to quick swims in the cola-coloured waters of the Touws. While the air was warm the water was rather chilly and I quickly decided that there was no way I’d be racing without a wetsuit for the full twenty-six-kilometre route on Saturday.

I have no idea how long it took anyone else to complete the Prologue course but it took us just under an hour. Which absolutely flew by. It could not have been any more fun.

Torpedo SwimRun Wild’s big selling point is the Kaaimans Swamble. Which in case you missed the explanation is a cross between a swim and a scramble down the Kaaimans River gorge. It was the event’s big hook for me, what could be better than rock hopping down a river?

It’s difficult to explain just how much fun the Swamble was. We ran from the Nelson Mandela University’s George Campus down the Seven Passes Road to the Kaaimans crossing and then Swambled all the way to the Kaaimans Restaurant, a kilometre from the ocean. It required constant concentration, while not swimming, because the surface was constantly wet and slippery. But that is what makes it an adventure. How Michael Lord and Llewellyn Groeneveld navigated the kloof ten minutes faster than the next best team is beyond me. Line choices and being brave/stupid enough to just plough through vegetation have dramatic affects on your overall speed. In my case taking it slow, taking lots of photos and videos was the best way to soak it all in.

After the Swamble we ran across the old Outeniqua Choo-Choo bridge, which crosses the Kaaimans River near the mouth, and descended onto the Wilderness beach. At the mouth of the Touws River we went back into the water for a quick swim before a winding run upstream provided some respite before the second longest swim of the race. Swimming a mile, or one-point-six-kilometres, up river against the current wasn’t easy. But when getting out I wasn’t most thankful for the buoyancy provided by my wetsuit. It was the protection from wind-chill which was the suit’s best benefit. The unseasonably cold wind was making life tough for the athletes who had chosen to start without a wetsuit on.

Run, refuel at the Fairy Knowe Hotel’s PowerBar water point, swim and a long run later saw us to the banks of Island Lake. At one-point-seven-kilometres long that was the longest and most daunting swim of the race. Setting out across the lake the distance is foreshortened while standing, but once at water level the far bank approaches agonisingly slowly. Water safely, provided by Wilderness NSRI, are never far off though and I’m sure I wasn’t alone in feeling totally safe throughout what was the longest contiguous swim of my life.

From the north bank of Island Lake a final four-kilometre run took us back towards Ebb and Flow. Just outside the camp’s gate the route turned cruelly away from the finish line and required us to swim from the far side of the road. This added another one-hundred-metres or so to the last swim, but hey, it’s all in the name of adventure. That just made the post-race Cape Brewing Co beer all the sweeter.

Find Your Next SwimRun Adventure