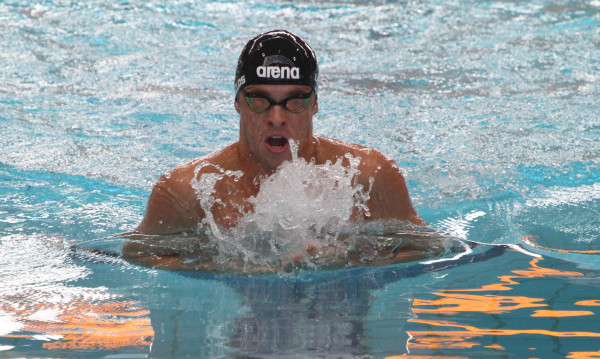 Following a disastrous elbow injury Ayrton Sweeney was unsure as to whether he was going to be able to swim again in 2015 however through determination and the help of the KZN Department of Sport and Recreation backed Elite Athlete Development Programme he competed at the World Championships as well as bagging three medals at the recent Africa Games. Supplied/
Gameplan Media

Durban – The road to recovery for up-and-coming swimming sensation Ayrton Sweeney has been a bumpy one however through sheer determination and the support of the KZN Department of Sport and Recreation backed Elite Athlete Development Programme he has his sights firmly set on qualifying for the 2016 Rio Olympic Games.

Sweeney injured his elbow earlier in the year which left him in a tough situation psychologically due to the pressure that he was under during his rehabilitation however with one single goal in his mind he managed to work his way back to competitive swimming.

“I had dislocated and fractured my elbow so there was no movement in it,” Sweeney mentioned. “I had some big fears but I was very worried that I wasn’t going to be able to qualify for the Olympic Games or get to the World Champs this year.

“I went to the doctor who said that with one and a half months to go until the World Championships there was a chance. He was very positive so I had that to go on.”

The mental obstacles that Sweeney faced were some of the greatest challenges however with the help of the EADP and the gains that he saw throughout his rehabilitation Sweeney remained upbeat throughout with his goal of getting the World Championships becoming more attainable.

“For me it felt like life was starting to shut down before I started my physiotherapy but I knew that I had to give myself the best possible chance to get to Worlds.

“My mind was clouded with negativity for a long time but I just dived in full throttle into my physiotherapy and rehab because as much as people would encourage me I needed to know that I was going to be ok!”

The hard work with the trainers and the hours put into the rehabilitation meant that Sweeney was able to get himself back into a good enough shape to get to the World Championships in Kazan, Russia – one step closer to his goal of getting to the Olympics.

“Just getting to Worlds was an amazing experience although it came as a bitter sweet experience for me because I am still an athlete and want to do as well as I possibly can but I knew that I wasn’t going to be near the top of my game.

“I was more relieved though to be able to compete and realise that I was on the track,” he added.

After his near-miraculous appearance at the World Champs in Russia Sweeney had a few weeks to prepare for the Africa Games in Brazzaville, Congo and the 22 year old knew that the continental championships were a chance for him to show that he was getting back to his best.

“I had a few training sessions between Worlds and the Africa Games to try and get myself into as good a shape as I could and I knew the importance of doing well at the continental championships and I knew that the goal was to win medals.

“I had mixed emotions with the 400m Individual Medley being my first race and I knew if I wasn’t in good shape it was going to be tough!

“I felt really good and managed to win gold and was two seconds off my personal best which surprised me.

“Then it was the 200m breaststroke, which is my signature event, and I felt great during the race!

“With two gold’s and a bronze I knew that I was well on the way to recovery.

“My performance in the Congo definitely changed my mental state,” a positive Sweeney said.

Sweeney attributes a large amount of the success of his rehabilitation to the Elite Athlete Development Programme.

“I could not have done it without Dennis Jackson and Wayne Holroyd, they believed in me and I believed in them hugely which gave me so much confidence and motivation.

“They completely fixed me when I returned from Cape Town and I am really grateful for all that they did for me although there is still a long way to go for me,” he mentioned.