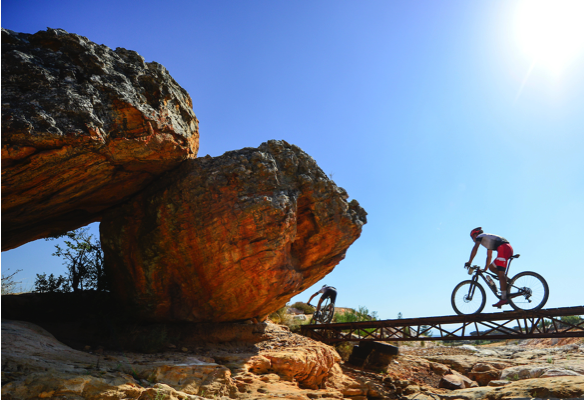 Long, steep climbs ensure that all three days of the Momentum Health Tankwa Trek, presented by Biogen, are a formidable challenge, even for the most seasoned professionals.
Photo credit: www.zcmc.co.za

The Tankwa Trek isn’t South Africa’s oldest three-day mountain bike stage race. Neither is it the biggest. But it is firmly on track to become the most internationally recognised, following the addition of two new sponsors and the upgrade to International Cycling Union (UCI) status.

The three-day race, which was only established in 2013, has rapidly become one of the most prestigious mountain bike races in South Africa. This has resulted in the event attracting premium brand sponsors, Momentum Health and Biogen, as well as the awarding of UCI status from 2017.

The UCI grading will ensure the event offers UCI rankings points to top finishers, increased prize money and boosted media coverage, all of which is expected to attract South Africa’s best riders as well as a top international field. The event will be known as the Momentum Health Tankwa Trek, presented by Biogen.

“Momentum Health has been a friend of cycling for many years and we feel privileged and excited to extend our love for the sport by partnering with a world class team in Dryland Event Management,” said Carel Bosman, Head of Sponsorships, Momentum.

“Being awarded UCI status will be beneficial to all involved – riders, sponsors and partners and will help elevate the Tankwa Trek to a truly world-class race. It also speaks volumes about the work done by the Dryland Event Management team. Congrats to them!” added Bosman.

“After more than a decade of involvement in endurance sports, Biogen is extremely proud to now be associated with the high caliber of events that the Dryland team is renowned for. The awarding of UCI status to the Tankwa Trek is further testament to this, and we look forward being both partners and active participants of this prestigious event,” said Brandon Fairweather, Biogen Marketing Manger.

The Tankwa Trek has a number of key factors in its favour, all of which have helped elevate the event rapidly:
Location: The race is held in the Kouebokkeveld (a two-hour drive from Cape Town), where there is significant elevation to ensure long, difficult climbs and descents as well as rugged, challenging terrain. This tests allround ability in riders, not just endurance as with most other three-day stage races.
Date: The race takes place either four or five weeks before the annual Absa Cape Epic. It’s the perfect form-check race because the terrain, gradient and racing intensity are all on a similar level to that of the Cape Epic.
Singletrack: A high percentage of singletrack changes the dynamic of a mountain bike race, favouring those that are more complete mountain bikers over those that have a largely road cycling background. The Tankwa Trek prides itself on its singletrack volume and the respect it has gained among top international mountain bike pros as a result.
Merino Monster: On Day 2 the Merino Monster challenges the competitors well beyond their comfort zones. Essentially a 20km climb with 1000m of vertical ascent, the Merino Monster is followed by a thrilling 20-plus minute technical descent and generally has a strong influence on the outcome of the overall race results in all categories.

“We intend to grow the Tankwa Trek each year in terms of its UCI status. It really is a hardcore racer’s event and we believe that we can take it all the way to the highest UCI grading. We will announce the prize money in January, but I can confirm that it will be significant!” said Henco Rademeyer, co-founder of the Tankwa Trek.

“We will do live video coverage of a big portion of the 2017 Tankwa Trek. Our objective is to show the whole race live, but it’s in a very remote area where signal connectivity is a challenge. So we’ll do as much of it live as we can,” said Mark le Roux of Bigshot Media, co-founders of the Tankwa Trek.

“We’re excited about the rapid growth of the event’s status and are now focussed on making it the most prestigious three-day mountain bike race in the world,” added Le Roux.

Former title sponsor, DUTOIT, a large fruit and vegetable producer in the Kouebokkeveld region, will still be a key partner of the event, after having helped it grow since its inception.

“It’s been great to see how the Tankwa Trek has evolved from a small event into one of the world’s leading short stage races. We love that athletes and their supporters from all over South Africa and overseas come to enjoy our mountains, fresh air and our fruit!” said Pieter du Toit, DUTOIT Group Managing Director.

The women at the Tanka Trek will once again be racing for equal prize money to the men, thanks to Anderson Transport, which has committed its support to the women’s division. The intention is to boost the profile of the women’s category so that it starts to match the men’s in terms of big-name participants.

“This is fantastic news! As a rider that has been competing in UCI XCO races this year, I know how important it is to have a good UCI ranking to start nearer the front of the field. By offering UCI points, the Tankwa Trek will definitely be more attractive to the top racers. I hope a lot of XCO racers will do it. I most certainly will,” said Ariane Lüthi, former Tankwa Trek winner and three-time Cape Epic champion.

In addition to Elite men and women’s categories, the Tankwa Trek also caters for Veteran Men (40-49 years), Master Men (50 years and older) and Mixed divisions, all of which have become highly competitive.

There are limited entries remaining for the 2017 edition, which will take place from 10–12 February. To enter, or for more information, visit www.tankwatrek.co.za.