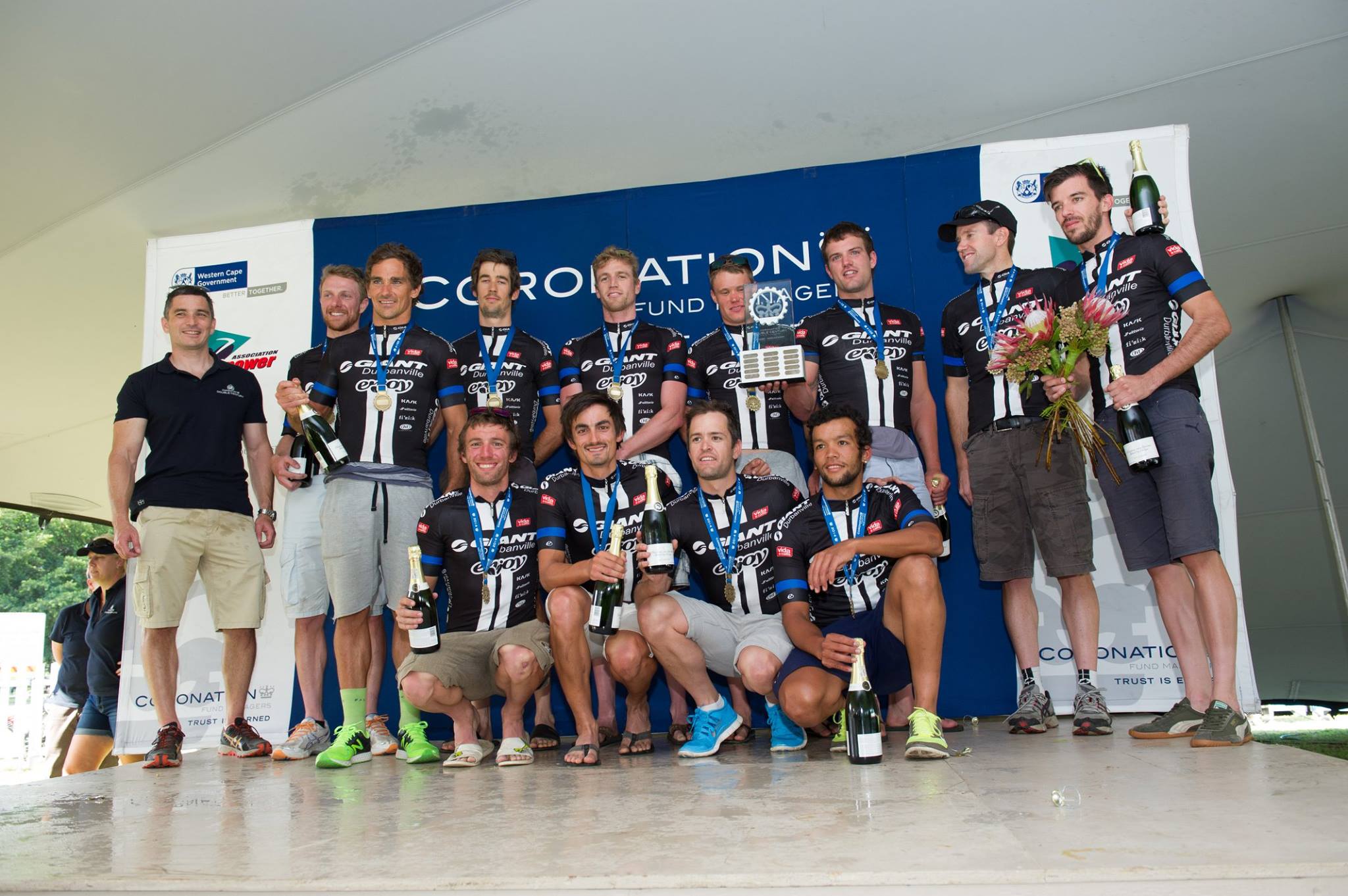 Team Giant Durbanville A clinched victory at the 22nd Coronation Double Century for the fourth time in a row on Saturday, 22 November 2014. – Photo Supplied

(Swellendam, 22 November 2014) Team Giant Durbanville A clinched their fourth consecutive victory at the 22nd installment of the annual Coronation Double Century on Saturday, 22 November 2014 – in a record-breaking time of 05:02:28.

Temperatures reached a high of 33 degrees celsius in Swellendam today, with around eight knots of wind – providing perfect cycling conditions for the challenging 202km route.

Team Giant Durbanville A manager, Hannes van der Walt was ecstatic about his team’s fourth victory.  “The team is over the moon because we didn’t expect to finish in the time that we did.  The weather was great this year – it was hot, but there was no wind on the course.  As it is a 12-man event we always try to stay together, and the two stops really helped because it allowed us to recover and regroup,” says van der Walt.

Alluding to defending their title in 2015, he enthusiastically added, “Next year we’ll aim to break the five-hour mark!”

Team HotChillee rider Ben Swift, who has been mentoring teammate Nicholas Dlamini for the past year, said he was delighted with his team’s performance and their second place finish after placing third in 2013.  “The race was good today and the team’s camaraderie was fantastic.  It was a full-on, full-effort race and I’ve only really done one week of proper training, so it was good that we shared a lot of the effort this year.  We stayed together for as long as we could, but if we’d stuck together more I am confident we could have taken the top spot.  The main thing is that we took a significant amount of time off last year’s result which was great,” says Swift.

Team Velocity Sports Lab Ladies grabbed the coveted title in the women’s category, finishing in an impressive time of 06:17:30.  They out-cycled second placed Team Paarl Media Pocket Rockets by just three minutes, while Team Bikeplus 2 was the third female team to make the podium.  Team Velocity Sports Lab Ladies’ captain, Miriam Stronkhorst says, “This year it was mainly about strategy for us.  The Paarl Media ladies were chasing us for a long stretch, but the key was not to worry too much.  We worked together as a team and it is wonderful to be back in Swellendam each year.  We’re a very bunch today!”

In the mixed category, Team Sure Global Travel were the ones to beat, claiming the top spot in a time of 05:28:39.  They were followed by Team Complete Cyclist Racing and Team Urban Fitness Outdoor in second and third place, respectively. Said Sure Global Travel team captain, Delaray Brugman, “The Coronation Double Century epitomizes teamwork, and today we rode with some of the most prestigious cyclists in South Africa.  This event is the best platform to show our capabilities because we’ve paid special attention to constructing a seriously good team. We’re euphoric about winning today because it is the one ride on the cycling calendar that we talk about all year.  It was a super overall experience for us.”

Team Cycling Misfits were the first group of all 12 riders to cross the finish line in a time of 05:33:24, and were awarded the Charles Milner award while Team Europcar were crowned the tandem champions, finishing in a time of 06:06:31.

Senior portfolio manager at Coronation Fund Managers, Neville Chester rode for Team CoroChaps, and was pleased with his team’s performance and the success of the 2014 event.  “Every year the Coronation Double Century gets better and better.  Over the years we’ve tweaked and fine-tuned things to make sure we offer cyclists an excellent experience.  The team-base of the event resonates with Coronation and how we run our business.  We work extremely well with the organisers, the Cape Town Cycle Tour Trust (CTCTT) and the Pedal Power Association (PPA) and we hope to enjoy many more years of this great partnership.”

David Bellairs, a director of the CTCTT, participated with a team of media, VIP and development riders.  Western Cape Minister of Economic Opportunities, Alan Winde also formed part of this team.  Bellairs concluded the 2014 event at the prize giving, saying: “It was a wonderful day out on the bike.  The ride started in ideal weather and ended with a moderate Southeaster, which made it a challenging day for all.  This certainly rates as one of South Africa’s most beautiful long-distance events.”

Over 2700 cyclists participating in 270 teams took part in the 2014 Coronation Double Century, cycling 202km through the Overberg region.