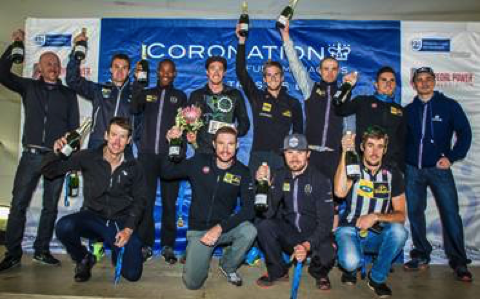 (Swellendam, 21 November 2015)  In what proved to be an epic battle for the podium with a time difference of only 1.4 seconds, Team MTN Qhubeka clinched the main prize at the 23rd annual Coronation Double Century on Saturday 21 November 2015 in a time of 05:05:41.00 beating second placed Tag Heuer Spartens by Harris with a time of 05:05:42.40. Defending champions Giant Durbanville took the third and final podium spot.

Rain overnight resulted in a cold start for the 257 participating teams.  Intermittent showers with around 6 knots of wind kept temperatures a cool 16 degrees Celsius in Swellendam for the duration of the race – providing tough cycling conditions for the challenging 202km route.

Team MTN Qhubeka’s Songezo Jim, was ecstatic about his team’s victory.  “At the first time check we were 5 minutes behind, and by the second time check, we had taken 4 minutes back again and were riding quite hard. We took the final 59 seconds back as we were coming into the finish line.  202km is a long day for us and the weather played a big part in our success.  It’s a very different route from the races in Europe and we really enjoyed it as a team, particularly as we did it for our charity, Qhubeka”.

Team captain Miriam Stronkhorst said it was a tough ride, “But we stuck to our strategy and went flat out from beginning to end. We were lucky this year as we were the last ladies team to start and once we passed the Paarl Media “Frosties”, we knew we were one up. We had a great mix of older, experienced riders and new, young riders who were strong climbers. We also had a couple of triathletes who were brilliant on the flats. By working together as a team, we supported each other to achieve this win.  We love this event – the organisation is fantastic, the vibe is great and the support on the road is awesome.”

In the mixed category, Team Complete Cyclist Mixed were the ones to beat, claiming the top spot in a time of 05:32:01.  They were followed by Team My Training Day and Team Hotchillee Mixed in second and third place, respectively. Said winning team captain Franco Ferreira, “We just tried to not go out too fast and worked hard to be patient for the first two climbs. This is our third year trying to win the mixed category and we had a time in mind, but the conditions were very tough and we had to adjust this, so we’re very pleased to be successful. We were also lucky as we had no punctures or mechanicals and the entire team rode well.”

Team Investec Asset Management were the first group of all 12 riders to cross the finish line in a time of 05:31:11, and were awarded the Charles Milner award, while Team Urban Fitness Outdoor were first in the mixed category to cross together, finishing in a time of 05:51:19.

Senior portfolio manager at Coronation Fund Managers, Neville Chester rode his 10th Coronation Double Century for Team CoroChaps, and was pleased with his team’s performance and the success of the 2015 event.  “The true essence of the Coronation Double Century is teamwork and endurance, with this year’s rain, wind and occasional frost, every team that crossed the finish line are true victors.  As naming right sponsor, we are proud of our partnership with the organisers, the Cape Town Cycle Tour Trust (CTCTT) and the Pedal Power Association (PPA).  Over the past nine years we have hard to ensure that the Coronation DC continues to deliver an excellent road riding experience for participants, team support crews and spectators. Congratulations to the various category winners; we look forward to seeing everyone back in Swellendam for another exciting Coronation DC in 2016”.

David Bellairs, a director of the CTCTT, participated with a team of media, VIP and development riders. Bellairs concluded the 2015 event at the prize giving, saying: “This year we treated the participants in the event to four seasons in one day – it was testing but nevertheless great fun and a wonderful day on the bike.  The Coronation Double Century remains the top South African one day team event.”