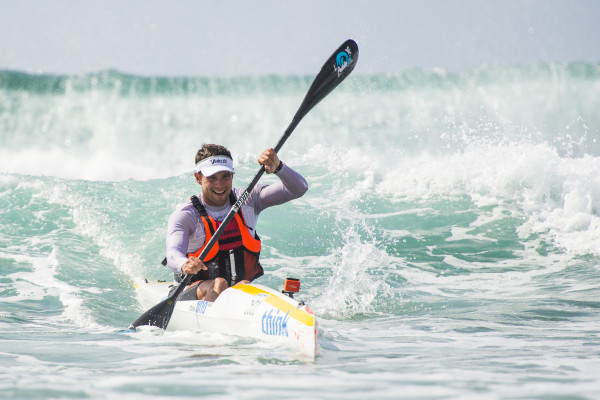 With the 2013 ICF Ocean Racing World Championship crown on the line defending champion and Think Kayak star Sean Rice will be hoping to retain his crown when he takes on the world’s best in Tahiti this weekend.

Durban – The 14-strong South Africa Surfski team is in its final phases of preparation before they take on the best ocean racers in the world at the 2015 ICF Ocean Racing World Championships in Tahiti this weekend, following hours of travel and layovers through a wide variety of airline routes to get to the remote Pacific Island.

The racing has been moved from the original Saturday and Sunday schedule to a day earlier to accommodate everyone due to the lack of surfskis on the island however the strong team from the Southern tip of Africa is ready to mix it up with the best in the world at the second instalment of this world championships.

The first edition of the world championships was held in Portugal in 2013 where South Africa dominated with Sean Rice winning the elite men’s race and, now American citizen, Michele Eray taking the women’s world championship title.

Out of the end haul of 11 medals that the South African team won at the first instalment of the championships there are three of those medallists will be returning in 2015 with defending world champion Sean Rice, Brandon van der Walt and Kenny Rice providing the thrust of returning podium finishers.

There are number of other heavyweight South African surfski paddlers who have made the journey to Tahiti in Hank McGregor, Jasper Mocké, Matt Bouman and the younger brother of Sean Rice, Kenny.

Sean Rice managed to hold off a tough field at the McCarthy Toyota Durban King of the Bay race that served as the trial race for the team that was going to the World Championships and with that performance as well as some good consistent showings throughout the World Surfski Series the Think Kayaks star is looking a strong contender to defend the crown he won in 2013.

As for McGregor and Mocké, they have spent a lot of time focusing on their flat water marathon form having recently finished second in the K2 race at the ICF Canoe Marathon World Championships with McGregor claiming his sixth K1 Worlds crown.

With neither Michelle Burn or Nikki Mocké representing the South African team it might have been right to think that Team South Africa were going in a bit light in the ladies field however with the likes of Nikki Russell, Hayley Arthur and the exciting Jenna Ward the stock of women surfski paddlers is strong.

Russell, who has been very strong throughout the year in her adopted Durban conditions will be hoping that she can take that form onto the international stage when she takes to the crystal clear waters of Tahiti.

Ward, on the other hand has also, like McGregor, had her focus split as she went back-to-back with her second bronze medal in the Under 23 women’s K1 race at the World Marathon Championships in Hungary recently.

With that said the youngster from Durban has also been in good form throughout the year in the ski with a number of wins in the various series that have been run as well as a third in the King of Bay race behind Russell and Arthur.

Ward’s partner at the recent Marathon World Championships, Kyeta Purchase was one of the finds of the event as the pair were strong against some of the best K2 crews in the world and will be one to watch in the Junior Girls race as she looks to prove that she is an ever-improving, all round paddler.

Brandon van der Walt and Kenny Rice will take up the Under 23 men’s charge with Jenna Ward in the Under 23 Ladies division with the young but impressive Bailey de Fondaumiere and Mark Keeling representing South Africa in the junior men’s race.