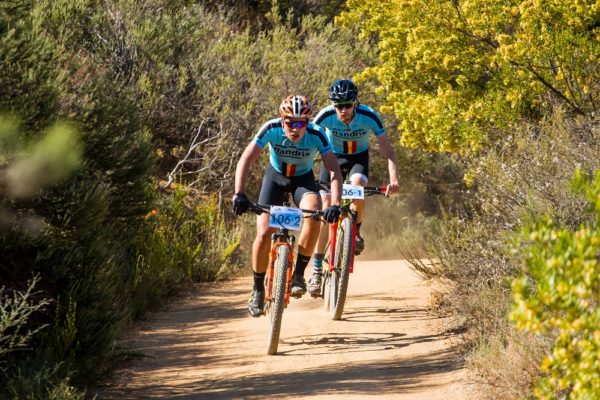 Stellenbosch teenagers Rossouw Bekker (front) and Robert Hobson, riding for Flandria Cycles, won the Sanlam MTB Invitational title at their first attempt when they led the field home in both stages of the two-day race at Rhebokskloof Wine Estate near Paarl in the Western Cape. Photo: Robert Ward

Stellenbosch teenagers Robert Hobson and Rossouw Bekker claimed the Sanlam MTB Invitational title on their debut after leading the two-day race from start to finish.

The Flandria Cycles pair overcame any inexperience as a first-time partnership to win both stages of the race, which started and finished at Rhebokskloof Wine Estate near Paarl.

The youngsters dominated the 60km opening day to take a comfortable three-minute lead over Bikeshop’s Aidan Connelly and Rogan Smart into the decider, with defending champions Pieter Seyffert and Hanco Kachelhoffer a further four minutes adrift.

Seyffert and Kachelhoffer, riding for Ellsworth-ASG, gave them a run for their money on the 40km grand finale, finishing 10 seconds behind the stage winners to move into second in the general classification ahead of Connelly and Smart.

Hobson, a student at the Institute of Marketing Management in Stellenbosch, said they rested prior to the race and were delighted with the outcome.

“It was really awesome to win it for the first time, but we had no real expectations going into the race because of the break,” said the 19-year-old. “We were pretty nervous going into the first stage but thought it would be great if we could give the ASG guys a run for their money.”

He said they decided to go fairly hard at the start today to “test the waters and see who has energy left” and the ASG duo were the only ones who could respond.

“The route suited us quite well because for the first 25km we did a lot of climbing. We are both reasonably light and climb quite well so we were able to sit on the front and set the pace.

“Pieter and Hanco were always with us and even when we dropped them on some of the climbs they would come back.”

Hobson said he had ridden the trails on Paarl Mountain often in the past and knew exactly where the last long climb before the final stretch of single-track was.

“We knew we had to get in first on the single-track, so we kicked hard on that climb.

“Maybe we went too hard, because they came back at us, but we were still able to get to the single-track first and from there it flows all the way to the finish.”

Hobson proved he was a rider for the future after winning both the Ride2Nowhere (alongside Erik Kleinhans) and Karoo2Coast in September, but said he was focusing on his studies for now.

“I’m enjoying the mountain biking, but it’s a priority for me to get something behind my name first and then I will see what my future in the sport is.”

He said he looked forward to teaming up more with Bekker – an 18-year-old matriculant at Paul Roos Gymnasium – as the latter would be studying in Stellenbosch from next year.

The Sanlam MTB Invitational had met all his expectations, he said.

“I just can’t get enough of the trails they have for this race; it really is an awesome event. The vibe and the catering are great and as a rider you don’t have to worry about anything.”

The women’s race was won by Halcyone Muller and Heidi Nieuwoudt, with mixed honours going to Corne Barnard and Cecilia Roberts.