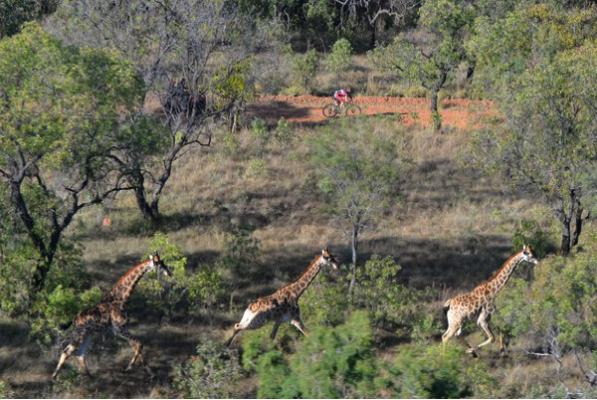 The unyielding terrain is what most title contenders fear at Round 6 of the Ashburton Investments National MTB Series, which takes place at Rooiberg in South Africa’s Limpopo province on Saturday. The bushveld race has attracted a strong field as a number of riders are still in title contention in the seven-round series.

But the rocky and technical terrain, which robs riders of achieving a consistent rhythm for any length of time, has been the biggest talking point among the contenders in the build up to the event, where the men will tackle 109km and the women 77km.

Current men’s series leader, Konny Looser (Wheeler iXS), from Switzerland, heads a up formidable lineup of podium contenders. Looser is yet to win a round of the prestigious series this year, but his consistency in finishing in the top five in all five previous events sees him atop the rankings.

“I haven’t ridden at Rooiberg before but from what I’ve seen and heard the terrain might be the biggest obstacle on the day in a field where anyone can win,” said Looser.

Looser’s “anyone can win” quip is apt. Each of the five rounds has had a different winner in this year’s Series. World marathon champion, Alban Lakata (Topeak Ergon) of Austria won Round 1 at Meerendal, while Max Knox (Biogen Volcan) claimed Round 2 at Sabie. Germany’s Stefan Sahm (Team Bulls) claimed Round 3 at Clarens, while Gawie Combrinck (EAI Cycling) and Rourke Croeser (Full Dynamix USN) captured Rounds 5 and 6 at Van Gaalen and Ballito respectively.

Of those winners, Knox is the highest placed in the Series rankings at eighth. The seven ahead of him have all been consistently high finishers. The final series rankings will be decided on each rider’s best five results.

Last year’s men’s winner, Darren Lill, the current leader in the King of the Mountains competition, and 2013 champion, Nico Bell (RECM), will be on the start line in an effort to defend and reclaim their titles respectively. Joining them will be, among others, South African champion, Combrinck, Waylon Woolcock, HB Kruger (Abanthu), Erik Kleinhans (RECM), Thinus Redlinghuys and the SCOTT LCB Racing pair of Philip Buys and Arno du Toit.

“The racing conditions at Rooiberg really suit me. I prefer the rugged conditions of course but this last week has been a bad one on the bike so this weekend might be hit or miss for me,” said Combrinck. “The Seven Sisters climb has been the decider in previous years and I expect it is where things will happen again this year. I come from the Lowveld so the climbing works for me.”

“I reckon the course suits me ok. I did well last year even though I cut a tyre sidewall. I think the most important thing about the event is to look after the tyres as best as possible. The route is extremely littered with rocks and thorns so it’s best to consider reliable tyres,” cautioned Woolcock. “Otherwise it’s one of those races where if you might be behind the leaders, don’t give up. Things can swing around in the blink of an eye.”

In the women’s race Ariane Kleinhans (RECM), the 2014 winner, will be looking for a repeat victory and to challenge for the Series lead. The Swiss ace won the Ashburton Investments National MTB Series title in 2014, and had missed one round in 2015, placing her in second place currently behind South African Candice Neethling (Freewheel Cycology Pam Golding), who will be at Rooiberg.

“I haven’t done the Rooiberg race before but I hear it is really rocky with short steep climbs and challenging singletrack. I quite like that kind of terrain as it requires a combination of skill and stamina,” said Neethling.

Another strong contender for the women’s title is Robyn de Groot (Ascendis Health), the 2013 Rooiberg winner. She crossed the finish line first in 2014 but the title was awarded ‘runner-up’ Kleinhans after it was discovered De Groot had missed a route marker near the end and completed a slightly shorter route.

“I think I’m ready for Rooiberg. I had some big weeks recently and I really hope I didn’t overcook it. You can easily underestimate this event if you just look at the elevation gain, but it is the rocky and technical sections that take their toll,” said De Groot.

“You would think that coming from a road background, I would prefer more manicured trails, but I actually like the more technical, rocky stuff so I’m looking forward to this one,” she added.

Other women expected to be in the podium hunt are the likes of Cherise Stander (RECM), Vera Adrian (BestMed) and Theresa Ralph (RBS).

The Rooiberg venue, which is a two-hour drive north of Pretoria, is spread over more than 12 500 malaria-free hectares, comprising unspoilt bushveld in the shadow of the Waterberg Mountains. The route this year will incorporate additional trail networks around the Elandsberg Nature Reserve.