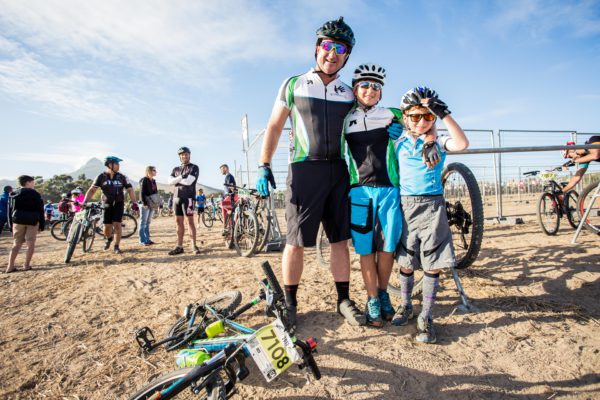 The focus of Saturday 4 March was very firmly on families, with three routes (14km, 20km and 30km) offering something for all fitness and skill levels. The event attracted a number of first-timers as well as lots of parents saying they’d entered as a way of spending quality time with their children.

“The numbers were up, which has pleased us greatly,” commented David Bellairs, Marketing, Sponsorship and Communications Director of the Cape Town Cycle Tour Trust.

“The weather played along nicely – it’s been hot, but not too hot,” he said, adding that logistically the weekend was a great success too. “The whole operations side of the business has worked really well, there were no hold ups in traffic or any major dramas on the routes, so we are very happy.”

If Saturday was a chilled family day in the Winelands, then Sunday was the day for the serious amateurs and racing snakes. The race, now in its 16th year, attracted a strong international field, including one of the greatest mountain bikers in the world, Christoph Sauser. However, it was one of Sauser’s young protégé’s, American Howard Grotts, who took out the title.

Grotts won the hotly-contested 55km ahead of Christoph Sauser (Specialized) and Matthys Beukes (PYGA / Euro Steel) less than three days after stepping off the airplane into the South African sun for a block of training.

“I just got here and haven’t felt the jet lag too bad,” said the 24-year-old after the win. Grotts was well chuffed with how well the trails in the Greater Simonsberg Conservancy rode. “Some sections felt like you were in a remote forest somewhere, it was really cool.”

“Yes, I think the cooler conditions made it easier and the route is a bit more hardpack,” commented Race Director Meurant Botha.

“I think we were lucky with the rain on Friday morning – we had about three or four millimetres in this area and if it wasn’t for that, it would’ve been much worse,” he said.

If Grotts rode alone for the last part of the race, women’s winner, Jennie Stenerhag (CBC/Åbro), spent all morning alone. Stenerhag led from start to finish to successfully defend her title ahead of the South African duo of Mariske Strauss and Cherie Redecker.

“I got a good start and was ahead of Mariske,” commented a dusty Stenerhag after the finish. “But then at the second water point I heard I had only 30 seconds, so I realised I had to pace it a little bit,” she said.

“After that I heard I had stretched the lead to two minutes and it stayed like that from there,” Stenerhag said.

According to the Swede who now resides in South Africa, conditions were ideal for racing. “It was not too hot and not too dusty – a perfect day to make it two in a row.”