This event had me puzzled. First run, then bike? The Asics Dirty Double multisport event, hosted by Gravel Travel comprised of a 10 Km trail run, followed by a 25 Km mountain bike race. It’s like wearing your underpants over your pants. Superman would’ve liked it. However, life is full of surprizes… 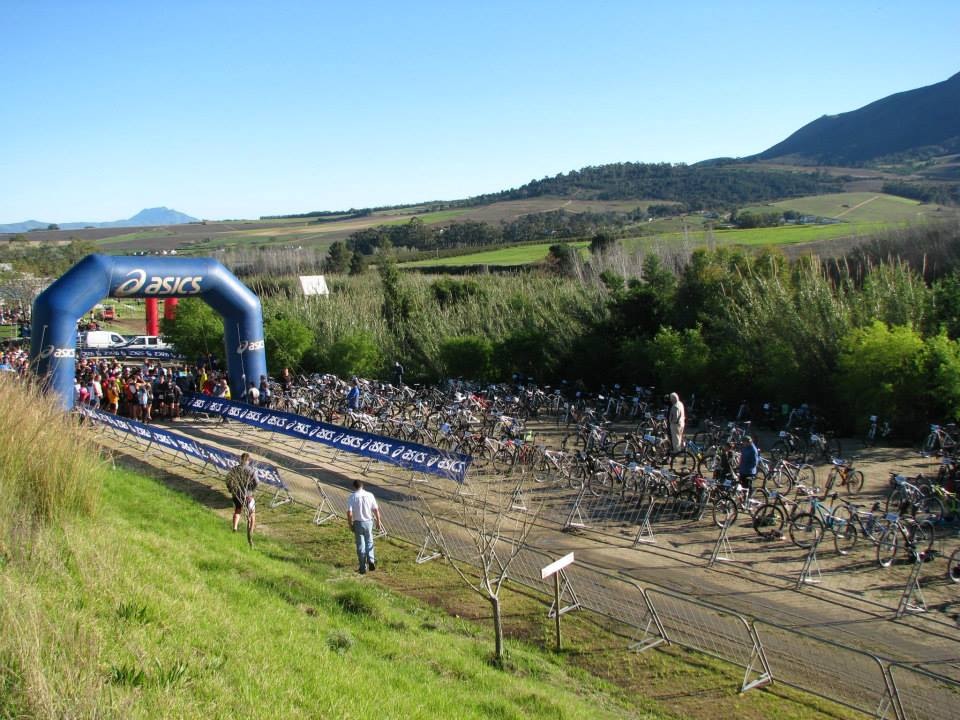 The start of the Asics Dirty Double multisport event

The Festa Kleinevallei farm in Wellington was basking in a perfect late winter’s morning, offering the bluest of skies and greenest of valleys. Everything about the venue looked super professional: the branding, the shutes, the race commentator, and with the absence of loud distorted Katy Perry and sokkie music, all was good! Big names were present as well: Lieuwe Boonstra, fresh out of multi-sport retirement, Rowan Kennedy, Dawid Visser, danger man Matt Daneel and amongst the fairest, Hanlie Booyens, one of South Africa’s most experienced competitors. 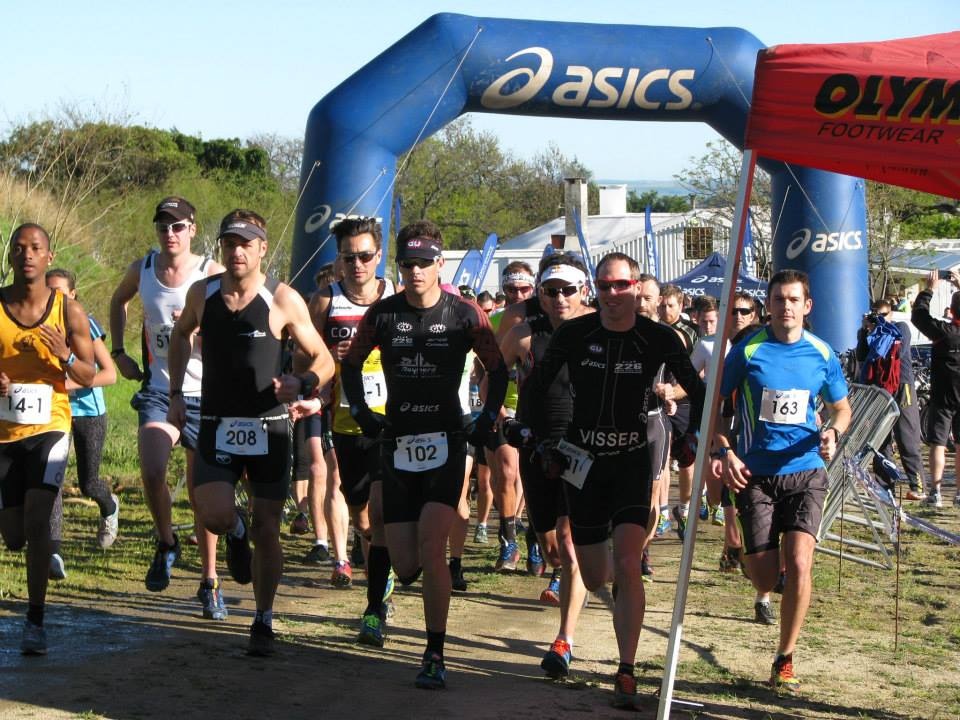 Some of the top Western Cape multisport athletes seen in action

I unashamedly took my place in the front row amongst the super athletes, next to Marleen Lourens, newbie 40+ age category athlete. The gun sent us straight up the hill (read “mountain”) to reach an elevation of about 350 meters after 4,7 Km. Interestingly,  I noticed many trail runners attempting this event, kitted out with all the hydration packs and buffs that defines the trends in trail running. They were bopping like mountain goats up the jeep tracks that took us to the top, leaving nothing but dust in our eyes.The descent took us for the best part of 3,5 Km down some serious, but exciting single track. Up ahead, Lieuwe Boonstra entered T1 first. Danger man Matt Daneel was about 40 seconds back, followed by Rowan Kennedy. Amongst the ladies, Hayley Harpur, Rentia Retief and Hanmarie Stadler were leading going into T1. Hanlie was lying 5th and Marleen 9th. But the bike leg would sort the out the men from the boys, and Cat Woman from Hello Kitty! The bike leg was by all accounts, mountain bike heaven. All technical and athletic aspects of mountain biking were tested: sublime single track, stiff climbs, rocky sections and fast, flat farm roads, all with clear route markers. Matt Daneel passed Lieuwe but for reasons unknown to mankind, assumed he was in second place. So Matt put the hammer down chasing the non-existing race leader. Rowan was lying securely in third. Amongst the ladies, the experienced mountain bikers were reeling in the trail runners. After all, as bipedal creatures, staying upright on a bike on rough terrain does not come naturally. It demands learned technique and skills. If you don’t have it, the going becomes nervous and slow. Hanlie was picking off the ladies as expected and Marleen Lourens, with Cape Epics and many other stage races under the belt, was flying past the not-so-skilled biking trail runners. 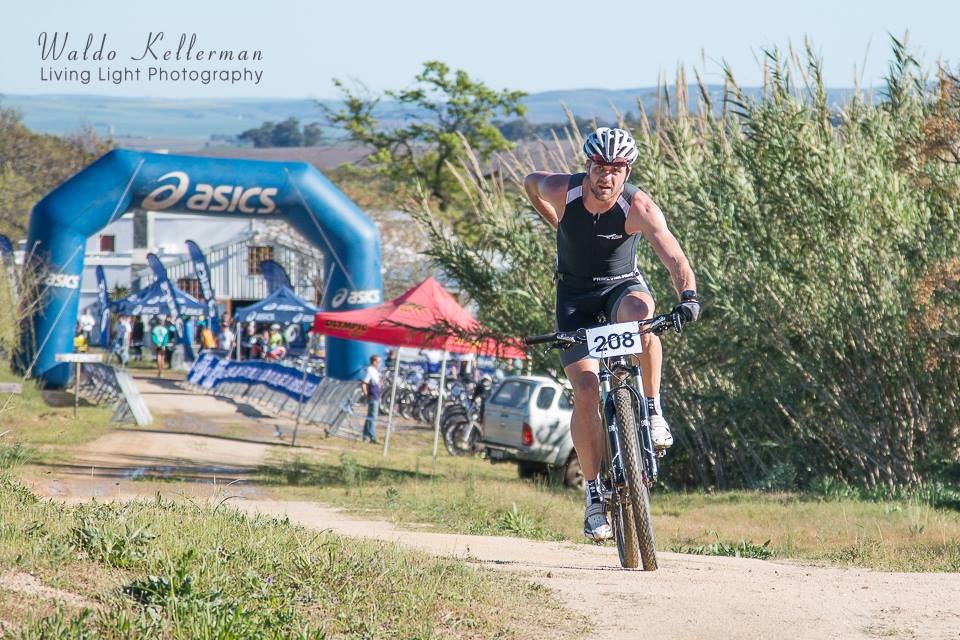 Matt on route and making it 3 from 4 races

The crowds were very vibey from the start, but even so, Matt was somewhat surprised by the humungously vocal crowd cheering him home for second, till he realized he was actually 1st. Since becoming First Accent performance tester, Matt has become any sponsor’s dream with his 3rd win out of 4 races! Lieuwe followed him shortly, whilst Pieter Calitz, keeping up a serious pace on the bike, ousted Rowan for third place. Hanlie Booyens took a well-deserved 1st place, while the surprise package of the day, MarleenLourens ticked off 7 competitors to secure a stunning 2nd. Jane Swarbreck completed the podium with 3rd place. 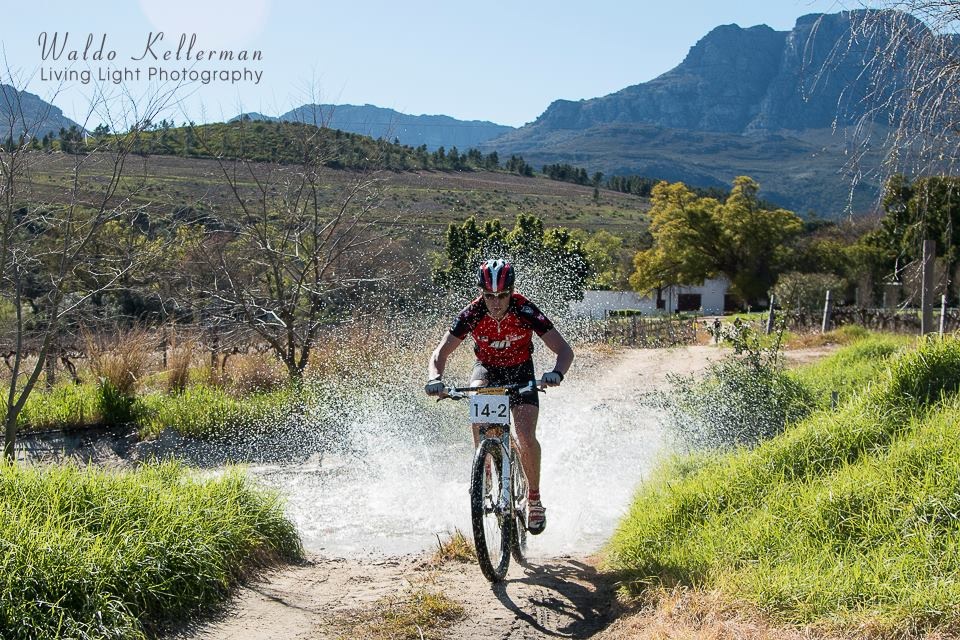 Everything about the Asics Dirty Double was awesome, but Pieter van Wyk, the course designer deserves a special mention. After all, that is what any race is all about, and in this case the course was supreme. Gravel Travel presents great events all year round, but make sure you diarize this one for next year. You’ll be smiling!