The challenge is on at Helderberg 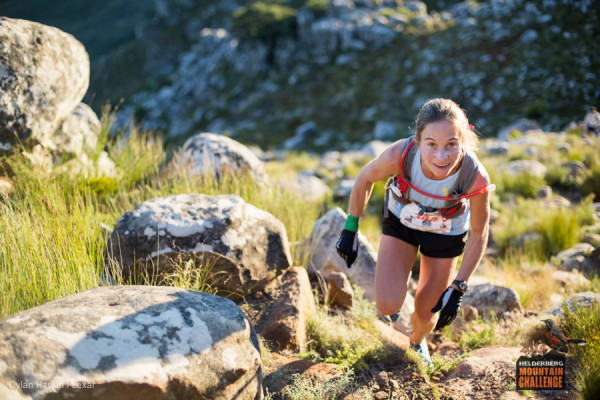 Katya Soggot will be hoping to secure her second victory at the Mountain Challenge Series in her bid for the Series title. Image by Dylan Haskin

This will be the sixth time that the HMC takes place and the epic 24km route has developed quite the reputation since it was first run in 2010. With just over 2 000m ascent and an equal descent in such a short distance, this reputation is well deserved. It is an extremely technical route, demanding utmost concentration from runners as they take on the narrow rocky trail up and down the mountainside. A visit to the remote Helderberg Dome makes it equally spectacular, while going up West Peak twice adds a huge psychological challenge.

In the men’s race, Bernard Rukadza will hope to carry on where he left off at the JMC with another first place. In 2014, Rukadza was struggling with an injury and could not keep up with the record pace set by Duncan O’Regan. However, with cool and dry conditions predicted for this weekend and Rukadza’s current form, he is sure to gun for O’Regan’s record and become only the second person ever to break the 3-hour barrier.

The HMC Lite 15km sees the return of Edson Kumwamba and Liandi van der Westhuyzen. Kumwamba will be hoping to improve on his second place at the JMC Lite 24km while van der Westhuyzen will be gunning for another first place after successfully defending her JMC Lite title two weeks ago.

The 10km Helderberg Mountain Run will be a wide open affair in the men’s race, but the Leslie sisters, Megan and Caitlin will be hard to beat in the ladies race.

The HMC is the second race of the Mountain Challenge Series and both Soggot and Rukadza will want to secure their second win of the Series in order to go for the Series title and the prize money bonus of R 5 000. The male and female Series winner will both receive R 3 000 and a R 5 000 bonus if they also manage to win all three races in the Series. The last race in the Series is the 55km Marloth Mountain Challenge (MMC) at Swellendam on 26 September.

For more information on the Mountain Challenge Series and the HMC visit the website at www.mountainchallenge.co.za.