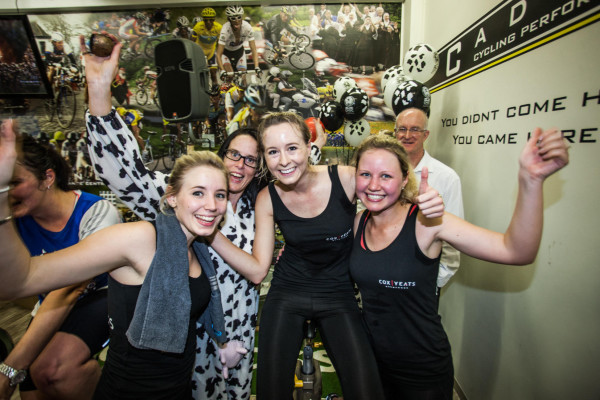 The KZN herd of The Cows has set a target of R250 000 to be raised at the 2016 edition of the CHOC fundraiser on Friday 24 June. Chris Laurenz/
Gameplan Media

Durban – With just less than a month to go to the 2016 edition of the 100 Miles Of Nowhere charity ride on Friday 24 June, the KwaZulu-Natal herd of The Cows has set a target of a quarter of a million Rand to be raised for childhood cancer sufferers.

The avid cycling enthusiasts, well known for taking on major events in their cow suits, raise money for the Childhood Haematology and Oncology Clinics (CHOC) and have expanded their annual South African edition of the famous training bike ride started by the American blogger popularly known as the ‘Fat Cyclist’ to include venues in the Western Cape and Gauteng.

The riders will take to Cadence Cycling Performance Centres at five locations in KwaZulu-Natal, one in Johannesburg, one in Pretoria and one in Cape Town, hoping to have every training bike occupied in the eight centres to help get to their target of R250 000.

Funds raised will come from the entry fee of each individual or team, along with donations to the cause in support of the riders.

The events have become popular as the close environment at the Cadence studios is conducive to a festive atmosphere and there is raucous celebration when a rider reaches the 160 kilometer mark.

Riders can enter as a solo rider, a team of two or a team of four for the 160km ride on stationary training bikes.

“It is a very do-able challenge,” said Iris Varty, the “Daisy” of the KZN herd of The Cows. “It is a great fun afternoon and in the short space of a few hours, we believe we have the capacity to raise an amount that will have a significant impact on the lives of children confronting cancer.”

“There is always fun competition between the various centres to see which one gets a rider to the 100 mile mark first.

“The various Cadence centres will be following on our 100 Miles Of Nowhere Facebook page and it becomes very spirited.

“It is always encouraging to see corporates contributing to the cause during the ride, even if they don’t have someone riding at one of the centres.

“We all know how tight the economy is at the moment but there is such a great energy and enthusiasm around the event that we honestly believe that with the centres in Cape Town and Gauteng involved, we can reach this target,” she added.

Entries are limited at each of the Cadence centres and are allocated on a first-come-first-served basis by booking on the event website, www.100milesofnowhere.co.za

More information can be found at www.100milesofnowhere.co.za

About 100 Miles of Nowhere
The event was first done in 2008 by an American blogger Eldon Nelson who goes by the name of the Fatcyclist or Fatty. The original event was a personal challenge for Fatty during his wife’s treatment for cancer. He did the first 100 Miles of Nowhere by himself, on a set of rollers in his garage. Before he knew it, his blog followers wanted to join him and do the event and so it become an annual and international event.

The next year — and every year after that — hundreds of people have done it. The event has since grown and there are participants across the globe. The Fatcyclist edition has an entry field of 500; who sign up and pay/donate to Fatty’s chosen charity. He used the interest in his challenge to raise more funds and awareness for cancer foundations. The idea is to complete a century in the most mundane and mind-numbingly painful way, to match the mind-numbing and painful repetition of chemotherapy and radiation for cancer.

The first South African version of the 100 Miles Of Nowhere was held in 2011 when a group of ten of The Cows completed the challenge as part of their year-round fundraising for CHOC (Childhood Haematology and Oncology Clinics).

About The Cows
The Cows were started in 2008 by a group of eight enthusiastic cyclists keen to make a difference and raise funds for CHOC. Cordi van Niekerk was one of the founder members and joined Kerrin and Grant Bain in cycling the 94.7 Cycle Challenge in memory of their little daughter, Jessica, who had recently died from cancer at just 20 months old. As CHOC had played a significant role in the Bain family’s life in the last few weeks of Jessica’s life, specifically with palliative care and emotional support, the decision was to make CHOC the beneficiary of their quest. They decided to don cow suits and succeeded in raising R230 000.

In 2009, the herd gained momentum and grew to an incredible 140 energetic cows. Just two years later the herd numbered a staggering 350 cows all riding for a purpose. Armed with the ‘Love Living Life’ slogan and a healthy dose of enthusiasm, the herd has enjoyed much success and acclaim.

Eight years later, hundreds of people have participated in events wearing cow suits. The Cows have just broken through the R24 million mark of funds raised for specific projects implemented by CHOC and The Cows brand is prominent in many sporting events in South Africa. With these funds, CHOC is able to make a difference to the children being treated for cancer throughout South Africa.

One herd; one quest: to make a difference to children with cancer. Love Living Life!