The FNB Cape Town 12 One Run – the birth of a super nova!

When I saw the first announcements of the FNB Cape Town 12 One Run, I thought: “OK, how is this gonna be good?” After all, Cape Town has the 2 Oceans marathon, and many other races to satisfy the runner’s palate. Fast forward a few months, and here I was, on Sunday 17 May, amongst more than eight thousand runners at Woodbridge Island, waiting for the gun to send us off on a fast, 12 Km route into Cape Town! Best of all was that Cape Town was basking in clear blue skies, perfect running temperature and virtually no wind. 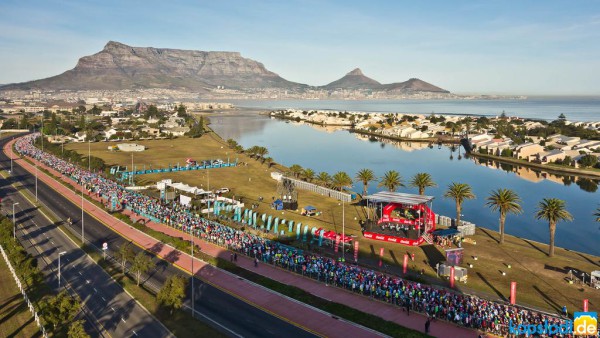 Stillwater Sports, the event organizer explained the recipe for this race: “This fast, flat 12km run brings together runners from all walks of life – from local and international running champions, wheelchair athletes from around the world and businesses who enter teams, to fun-runners who join to dress up and enjoy the live music”. And it worked. Arnoldt Geerts and Paul Valstar, renowned for well-informed race commentating, got the vibe into overdrive. The presence of elite athletes from other sporting codes was noticeable, also confirming this race as a celebration of Cape Town and the sport of running. Richard Murray, SA’s triathlon super hero, fellow triathlon Olympian Mari Rabie, trail running star Landi Geyling, XTerra star Bradley Weiss and many others were present. 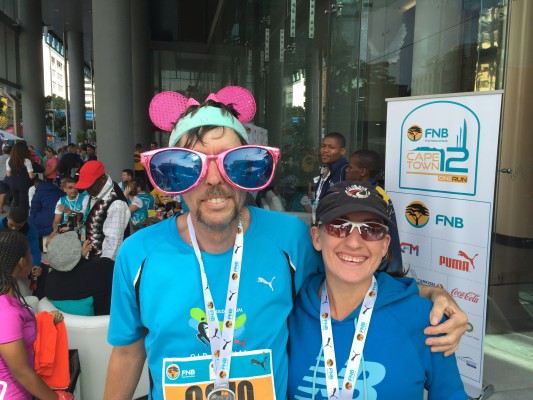 Bunny ear athlete with Nicol Muller in the VIP area.

Just before the race started, the winner of the lucky draw for an Opel Adam from Reeds, was announced. The lucky lady was called out from the 8000 competitors onto the stage with Arnoldt and Paul, and her exuberance only added to the enthusiasm. She literally ran to Cape Town to fetch her lift back. After a short introduction of the top elite athletes, deputy mayor Paul Nielsen fired the starting gun. 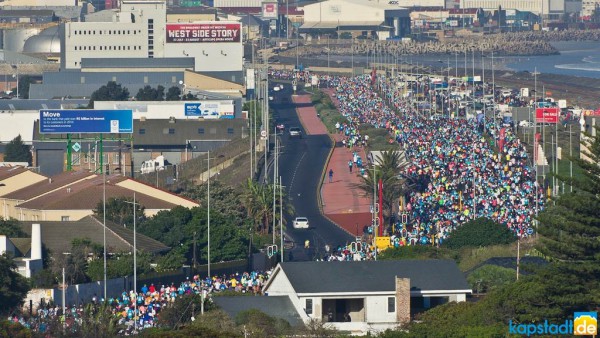 Amongst the men, the Kenyan and Ugandan presence pushed the tempo to well below the 3 minute per kilometre right from the start. The superbly fast ladies from Ethiopia and Kenya set a pace of around 3:18 per kilometre for their counterparts. For the elites as well as the top age-group athletes, everything becomes a blur, as it is flat out from the gun, right up to the finish line. At the back of the field however, the real enjoyment and race vibe happened. The dress code varied from Superman to Tutankhamen, bunny ears aplenty, and more wigs and funny additives you could count. 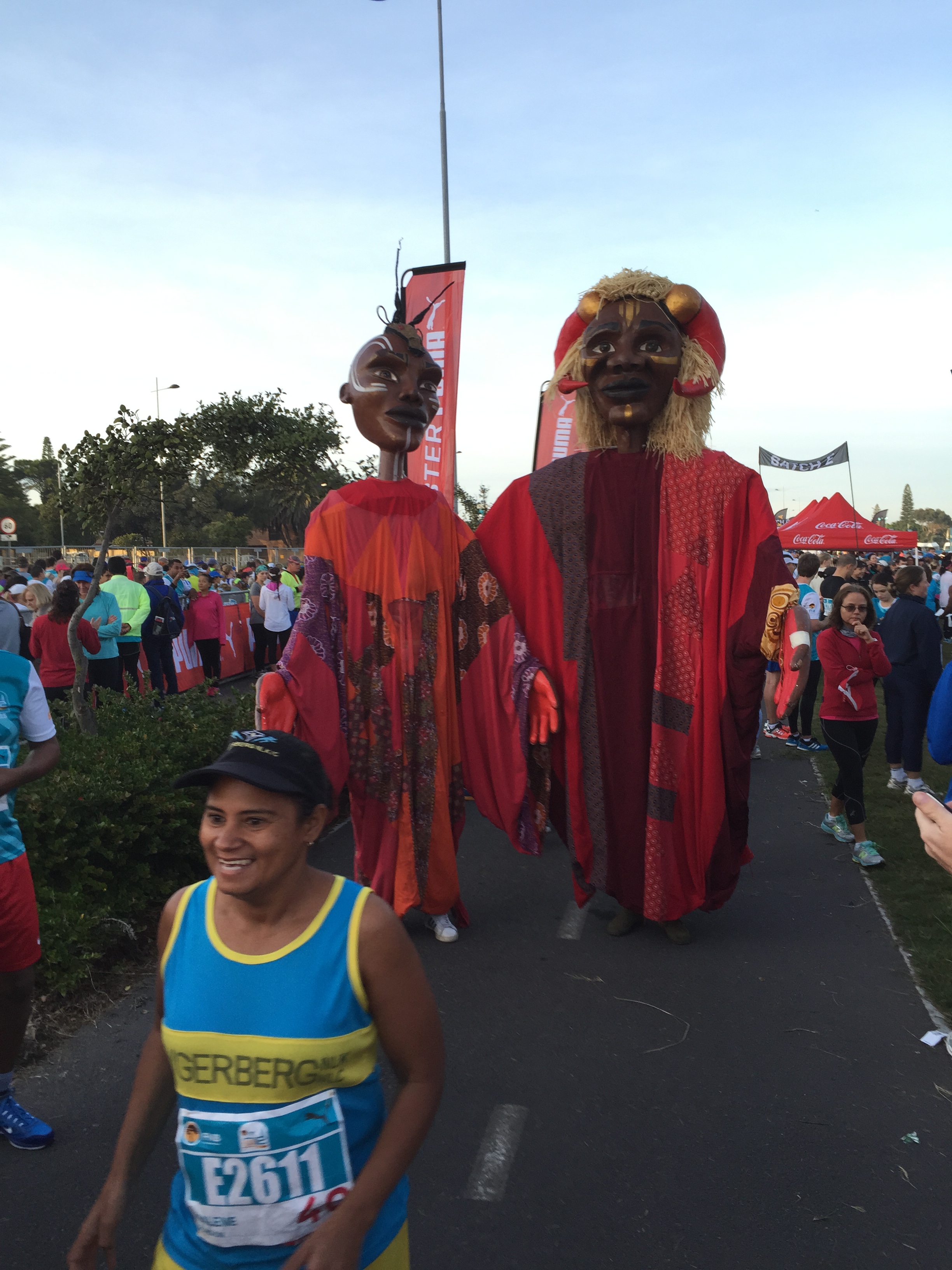 Along the course various live bands and cheer groups kept the vibe in top gear, and feeding stations offered sufficient nutrition. Aided by announcers at strategic points along the routes that were familiar with intimate club and runner detail, the banter amongst the runners were fuelled to levels of unparalleled creativity.

As runners entered the Company Gardens in the city, a slight incline slowed down the pace, but the lush surroundings and crowd proximity lifted the spirits. Shortly after that, Heart Break Hill, a very steep 200 metre incline demanded a last leg push before turning right into the finishing straight. The last 1.5 Km to the finish line was any runner’s dream: a slight decline, offering you a PB for a last Km of any race you have ever done. The tape was broken by Emmanuel Brett from Kenya in a winning time of 33:32 with a pace of 2:47 min/Km. Vivian Cheriot, also from Kenya, took the lady’s trophy in a time of 38:22 with a pace of 3:11 min/km. Every single runner went home with a medal and a big smile. If you opted for the gold package, entry to the VIP area offered sushi, snacks and drinks on the house. 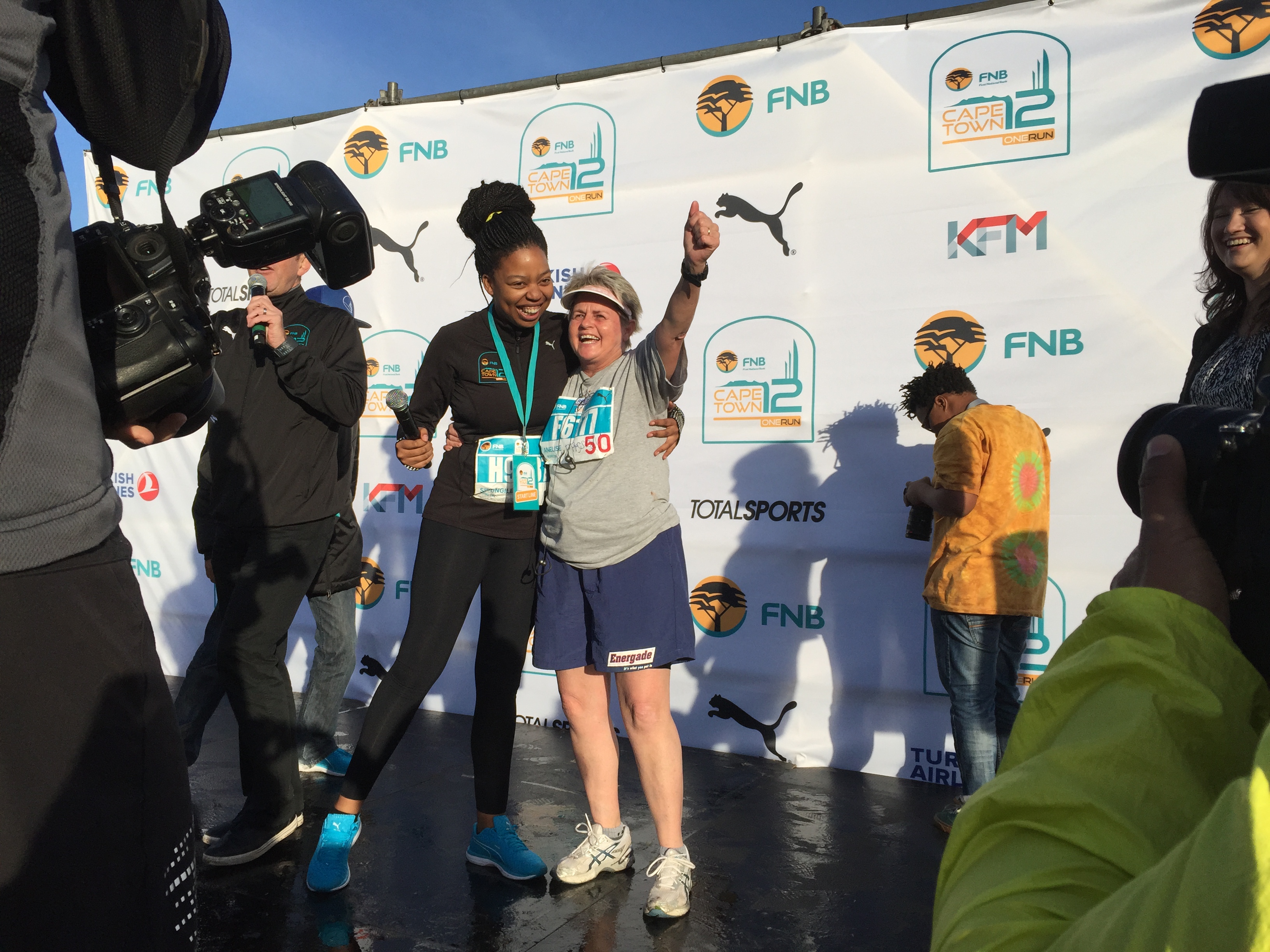 If crowd participation is the backbone of an event, the FNB Cape Town 12OneRun will be strong for years to come. An amazing event was born. Expect more international participants and double, maybe triple the total entries. Unlike the longer mass runs, this one leaves you with energy to party, and a party it was! See you all next year.