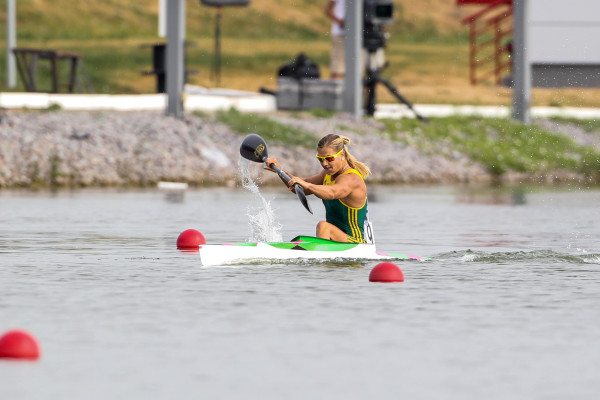 2014 Sprint World Champs bronze medallist Bridgitte Hartley will lead the charge at the upcoming South African Sprint Championships being held at the Roodeplaat Dam in Johannesburg over the Easter Weekend from 3-5 April. – Balint Vekassy/
Gameplan Media

Johannesburg – At the start of a crucial Olympic qualifying cycle the South African sprint canoeing championships at Roodeplaat Dam over the Easter weekend from 3-5 April have pivotal importance to the best racers in the country, compounded by the inclusion of a team of elite sprinters from Singapore.

With a stellar entry list that includes 2012 Olympic bronze medallist Bridgitte Hartley the racing will be highly competitive and Hartley is hoping that she can recreate the form she showed in the 2014 season as she prepares for her international season following the national show piece.

“This is the real start to my season,” the 2014 World champs bronze medallist said. “It was hard to focus on one event at the KZN champs recently and the conditions were quite bumpy with a bit of a backwash so I am seeing the national champs as the first major race for me before I start focusing on the World Cup season.”

It has been an intense start to the year for Hartley who has been training hard in the gym as well as on the water in preparation for the international season. She sees the upcoming national championships as an important litmus test to see where she stands heading into the European summer.

“This event is the most important event for me so far considering it is my first major event and I still don’t really know what to expect because I haven’t been racing properly yet this year but I have been training really hard so I am excited for what is to come!

“I am going into the event with my main focus being on the K1 500m so I have set a couple goals for myself at the event and we will see how it all goes when I get up there,” she added.

Having to deal with the Highveld conditions is something that Hartley has taken into consideration and getting up there with enough time to acclimatise is what she plans to do and the Natal Canoe Club star hopes that she has given herself enough time to get ready for the event.

“We are heading up on Wednesday so that I give myself enough time to train on Roodeplaat Dam and get used to the conditions up there because I really need to paddle up there as much as I can before the event.

“Back home it has been about putting in the hard work and the big base in the gym, swimming pool and on the water but now I have to get up the Johannesburg and get the job down on the water. It was important that I didn’t over-train going into the event so I have been tailing off a bit recently.

“It is now not about gym volume at the moment, it is about racing well as the preparation for the SA Champs is done,” Hartley mentioned.

There will be a strong contingent from Gauteng taking part in the event and Hartley knows that the girls that will be coming from Pretoria are going to be a slightly unknown commodity but being able to peak at the correct time during the event is paramount.

“I was feeling a little anxious about maybe going over the edge while I was preparing but I have been getting personal bests recently in the gym and on the water so I know that I am well prepared for the event I haven’t raced the girls from Pretoria so I don’t quite know what to expect from them.

“I also just want to have a good race and good competition that I hope will stand me in good stead for the World Cup season that starts soon,” a hopeful Hartley concluded.

The visiting squad of elite racers from Singapore have been based at Hartley’s home club NCC at Camps Drift in Pietermaritzburg in recent weeks, and thriving on the coaching and high level environment at the Elite Athlete Development Programme satellite operation on the banks of the Dusi River.