The last hoorah for Kime at Non-Stop 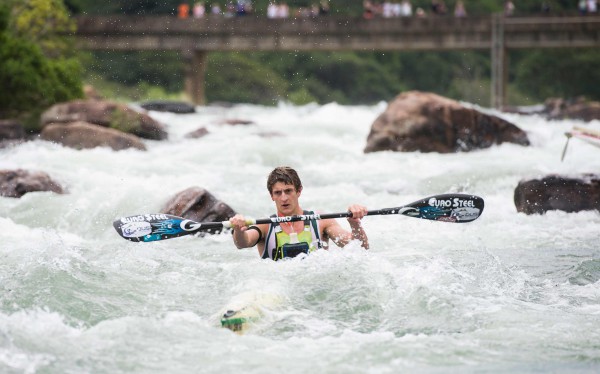 Having paddled to a runner-up place at the 2015 Dusi Canoe Marathon Lance Kime (Euro Steel) will be taking on the Non-Stop Dusi Canoe Marathon before he hangs up his paddle for a while as he travels and works overseas. – Anthony Grote/
Gameplan Media

Pietermaritzburg – Having finished his studies and notched up a runner-up finish at the 2015 Dusi Canoe Marathon, former Dusi winner Lance Kime will see the 2015 Non-Stop Dusi as his final competitive race before he jets off to Europe to work and travel leaving the world of competitive paddling behind for the next few years.

The Dusi in a Day does not have the same build up as the Dusi in terms of exposure but for Kime this is something that he enjoys and a low-key build up to the race means that he can go about his business quietly.

“With a two week turnaround from the Dusi the best way of training for the Non-Stop is just resting up and taking it easy so I will go for a few runs and a paddle or two,” a relaxed Kime said. “The race is very different from the Dusi in a number of ways and I almost enjoy it more as there is a lot less pressure on us going into the race.”

Having to negotiate the Msundusi and Mngeni Rivers to Durban in one day instead of three the Euro Steel star believes that the pace of the Non-Stop is more tailored to his strengths as he feels he will gain momentum as the race goes on.

“The race is a lot more relaxed and the pace is a lot slower with the first half being a runners race and then a lot of paddling in the second half and that is hopefully where I will be strong going into the second part of the race,” Kime mentioned.

Kime, who has taken part in two Non-Stop Dusi’s prior to the 2015 edition, has never tackled the race in a K1 and he believes that there is less chance of coming into problems in a K1 then there are in a K2.

“With two guys in a boat there is a bigger chance of something going wrong.

“If someone in the boat blows then the whole boat won’t be as strong and lose a lot and there is always the chance that the other guy will blow at a different stage so there are problems so I will hopefully be better on my own.

“I am looking forward to the challenge for a K1 race which gives me a little more motivation,” he added.

The 105km challenge does not draw in the numbers that the Dusi does and Kime is aware that the front of the field could get quite lonely but this does not phase the 23 year old who feels that being alone plays to his strengths more.

“I do prefer to paddle alone because I am not a flat water marathon paddler and I don’t really like sitting on a wave but with that said when we get to halfway I will enjoy the company of the other guys!” he explained.

One of Kime’s major threats will come in the form of 2015 Dusi third place finisher Sbonelo Khwela (Euro Steel/Red Bull) and he knows that Khwela is a strong runner and being able to try and stay in touch with him will be vital.

With the travel bug having bitten Kime the Non-Stop will be his final race as a competitive paddler with a social STIHL Umkomaas Canoe Marathon on the cards as well which means that a winning finish is a goal for him.

“Look, I am not putting any pressure on myself going into the race and having a clean race is my main concern but if I can get a win that would be brilliant as well!

“The fact that the race is my last for a while is definitely a little bit of added motivation,” he concluded.