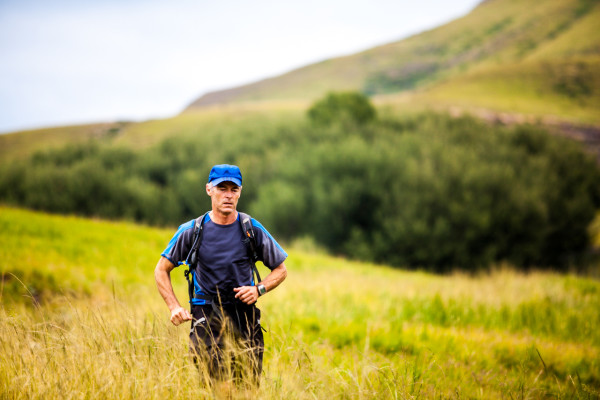 The first stage of the LED lenser Wartrail Challenge started at four o’clock in the morning on Saturday in Lady Grey. The adventurous souls set out on their sixty kilometer Mountain Run across the Witteberg Mountain Range. The top six finishers completed the stage in under eleven hours and had beautiful weather all along the route with clear skies and no wind to speak of. Anyone finishing after that was to be pelted with hail stones and hard rain in a storm of apocalyptic proportions. A new finish line location brought racers right into the Balloch Cave, where friends and family were waiting to offer food, tea, coffee, and a seat next to the glowing fires. Whether in the ablution block, around the fires, or in the tented camp, it was impossible to not overhear war stories being shared about that thunder, lightning, and the beauty and harsh nature of the route.

Before the one hundred and fifty kilometer Adventure Mountain Bike stage could begin on Sunday, the start line back in Lady Grey had to open again for the second day in a row for the Non-Stop Wartrail Challenge to begin. The teams of two had a window of five hours from 04h00 to 09h00 to strategically begin their race, consisting of the same three legs as the Wartrail Challenge but to be done back to back through the night in adventure racing style. In Pure Adventures’ signature style, the new-look Mountain Bike route took the riders away from the tar road and into the Mountains. It included a tough gorge crossing, beautiful single track, long stretches along the Karnmelk river and a lung-busting climb up the famous Joubert’s Pass. The ride ended in Mdlokovane Village and took riders between ten and fifteen hours to complete.

Shortly before the third and final stage was to begin, the first team in the non-stop race had caught up through the night on their bikes and would begin the paddle at the same time as the staged race competitors. After the good rain in the area, the river was flowing strongly and would make for a fast paddle. The paddle went off without a hitch and everyone got home safely to finish at the Riverside Lodge in Aliwal North.

First in the ladies category was Janneke Leaske (28h 45min), followed by Rhode Versus (34h 48min) in second place.