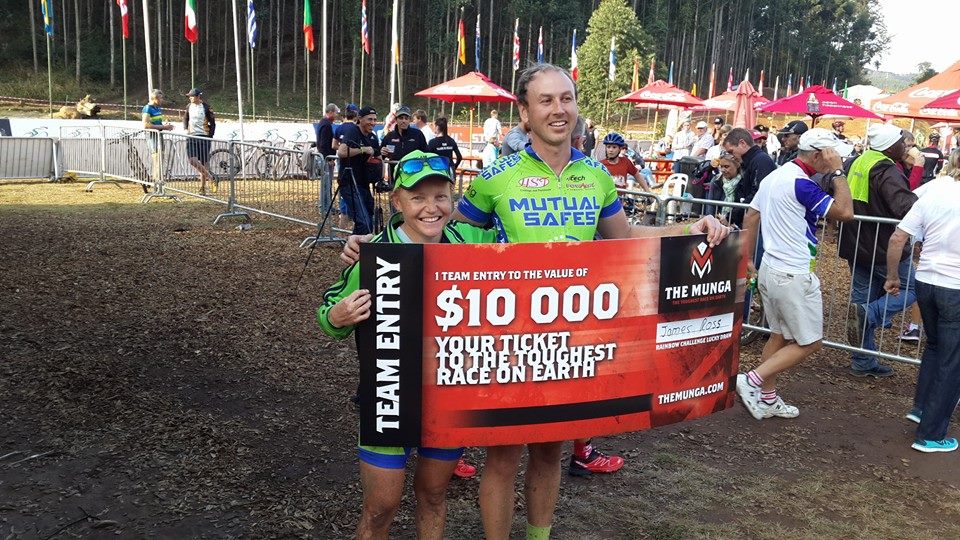 I am actually still in shock about winning the lucky draw at the  inaugural Master World Champs – Rainbow Challenge held at Cascades on Saturday the 28th of June. http://rainbowchallenge.co.za/

We left Pretoria around 06:00 on Friday the 27th and stopped in Harrismith for lunch, arriving for registration and race briefing at Cascades in Pietermaritzburg. I had read in the email leading up to the event that there would be a lucky draw entry to The Munga to a participant of the 70km, and I made a deal with Nicky (Turbo Mamba is her nickname, Andrew’s is Big Unit Mamba FYI) that if I win I would choose her as my partner for the Munga and she said she would do the same. (An entry into the event cost $10 000, roughly R 1 00 000 per team!)

During the race briefing it was announced that you would have to finish the 70km race to be eligible for the draw.

It was raining and cold on Friday and Saturday morning the course was proper muddy. It was a long day out, and super tough, 70 km with 2300m of elevation! I finished in a time of 05.46.05, not the best result ever, but I knew I had a chance for the lucky draw.

After prize giving the organisers of The Munga came up on the stage with a computer that randomly selected one of the riders who had finished and the first guy’s name was called, he was not there! They started the countdown, 3,2,1.. Next guy’s name called also not there!! Can you believe it!! Why would you not stay if you knew you had a chance? Then.. they called my name, I froze, my girlfriend Elzi (Nagapie Mamba) was screaming next to me and Nicky’s husband Gerrard (Lazy Mamba)  pushed me forward. I could not believe it!! I asked if Nicky could come up on stage to celebrate with me and the rest as they say is history.