The Pornographication of Fitness Needs to Stop 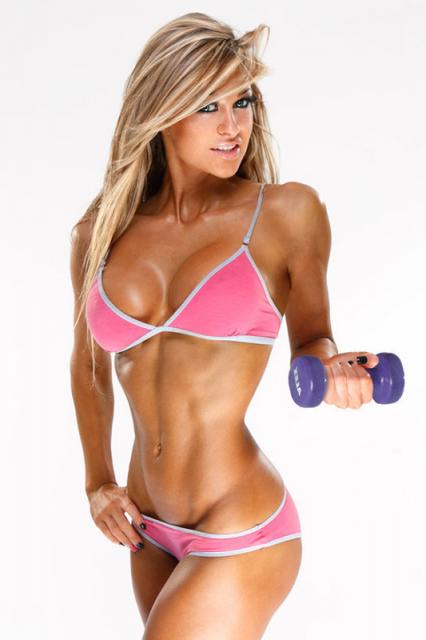 Fitness magazines don’t help us get fit. Gazing at images of caricatured breasts, buttocks and biceps gives you the impression this is how a fit body should look, that every fit body needs to be shaped in the same vein. Fitness magazines use exactly these images to “inspire” women to look this way. Yet most of us can’t identify with what we are looking at because we don’t believe ordinary us could ever be them.

What has become of fitness? Where is it going? When every image displayed in fitness magazines has become one suggesting women are dressed and posed for the bedroom and not the gym, one might wonder exactly where the future of fitness is going. Having been a bikini girl in my past days, I never took myself seriously as such because I carved a bikini-wearing physique out of my 204 pounds of fat when I was 40 years old. I was the outlier compared to the 20-somethings.

Clad in what was essentially panties and bra, standing on a fitness booth at the biggest fitness Expo in North America, The Arnold in Columbus Ohio, hawking fitness gear and the lifestyle, I felt scandalous exposing my well-toned thighs and abdomen to the general public, to say nothing of what I couldn’t see behind me.

My glutes were well-trained, tanned and lightly oiled for sheen and properly lifted through wearing stripper shoes. And let me share that by no means was my outfit scandalous in comparison to the ripped fishnet wearing, watermelon-busted, blonde bee-hived, ripped to pieces, glute-baring characters in full display everywhere else at the expo.

It was an adventure to play along with the youngsters but I kept the private joke to myself, the joke that was age. A body at 40 isn’t quite the same as a body at 20 even though I gave it a good run. But I knew that when my body ran out thanks to the aging process, at least my brain would still be there and that I would have talents that went beyond displaying my gym body in public. I can say this because I never depended on my physique to make a living in the fitness industry. I depended on my brains.

The worry is that what women see in fitness magazines teaches them that what they are seeing is possible for them too. Women are desperate to be published in fitness publications, to be glorified into eternity through a photo. Women will do anything to get there. They will starve themselves to get lean enough to be able to see all muscular definition, they will experiment with recreational and pharmaceutical drugs, they will prostitute themselves to judges and more, just to make it.

What we don’t realize is that when we are looking at the faces and bodies of women in these physique magazines, is that most of them have dieted for months to look that way. Or most of them are just days prior to a contest where they have put themselves through rigorous training and dieting to get lean enough. Or they have just competed and won’t look the same in a few days time.

What are we teaching our young women who want desperately to believe that they too can be as ripped and shredded? They don’t realize what it takes to look so tight. They want to be there and harm themselves to reach an almost unattainable ideal. When will it be acceptable to lift heavy, building confidence and brainpower while strengthening your body, not concerning yourself with how cute your bottom looks in booty shorts?

Perhaps from my vantage point of 55 years of age, one willingly accepts that there is more to fitness than pornography. Somehow the butt-baring image just doesn’t work after a time. So what then is the new direction of fitness? If you ask me, the key to fitness is being able to move your body in the way it was meant to move.

It means you can run, jump, swim, play, bend, walk and lift with all parts of your body from joints, muscles and bones to hands and feet, all body parts working in unison. It means that if you had to run 5K to get away from danger, if you had to swim for 20 minutes to save yourself in a flood, if you had to lift a heavy weight out of the way to free yourself, something or someone else, you could do it.

The new fitness trend is not about prostituting yourself but about doing the hard work measured in reps, sets and sweat to create a body, an entire organism engineered to sustain itself in this brave new world. It means you can help yourself — not be dependent on someone else. It means you train differently, think intelligently, respect powerfully, sensing a new strength in yourself that comes not from the desire to have a cutie booty but a strong one that can move when it has to, along with the rest of the magnificent machine called YOU.

Being fit in a functional rather than sexual way means you are entirely capable of being powerful no matter what your height, bust size, shoe size or hair color. You are empowered from the depths of your DNA because you did the work, you earned your place and you walk confidently because of it. A functionally fit You welcomes all sizes, shapes and colors, your boobs and butt are incidental. What we really need to build in the gym is a sense of self and what we are capable of. Believe it!