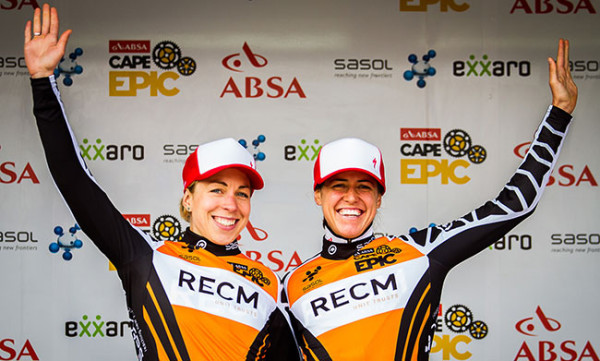 ‘It is great news that the Absa Cape Epic is always open to feedback from the riders.” – Arian Kleinhans

“A separate start will ensure fair racing amongst the women and it will eliminate the influence of the men on the women’s race. It will lead to different tactics and closer, exciting racing,” said the British marathon racing legend.

The new rules are designed to increase competition and interest in the elite women’s race.

Bigham added: “The ruling regarding the team kit will enable women from different trade teams to form partnerships for the Cape Epic, which will in turn lead to a more competitive and exciting women’s race.”

Bigham pointed out that the women’s race would be easier to cover for the media if the elite women started together each day and for spectators to follow the race as it unfolds.

“The 2016 Cape Epic will be setting a benchmark for women’s professional MTB stage racing and I am thrilled to be part of this development,” she said.

The changes were announced this week by the Absa Cape Epic and have been widely heralded. They are:

The changes follow the ground-breaking sponsorship by Sasol since 2014 of equal prize money for women. Two years earlier, in 2012, the women’s race was granted HC status by the UCI – the highest categorisation which can be awarded to an event.

Switzerland’s Ariane Kleinhans, winner of the Women’s category with Denmark’s Annika Langvad in both 2014 and 2015, also enthused about the new rules.

“It is great news that the Absa Cape Epic is always open to feedback from the riders, and willing to improve the race to make it a more competitive and interesting in the women’s racing,” said Kleinhans. “Mountain biking is a young sport and is developing very fast. It’s commendable how the Absa Cape Epic reacts to change and adapts it’s rules.”

Norwegian mountain biking legend Gunn-Rita Dahle Flesjå, who took part in the event in 2015, said: “This is great news for the cycling community in general. It also has an important symbolic meaning for all women in the sport.”

Barry Austin, a director of sports sponsorship management company Lange Sports, said: “It is fantastic news that the women’s race is being highlighted and profiled in this manner and the Absa Cape Epic is once again leading by example.”

Switzerland’s Kathrin Stirnemann, the 2014 Cross Country Eliminator World Champion, said: “The new rules are a big step forward. Seperate starts will make the race fair for every womens team and I’m sure we are going see a different style of racing, especially in the beginning of the stages.”

Turning to the new kit rules, she said: “I’m sure you’re going to have big names pairing up in Cape Epic in the future. I love the Absa Cape Epic and want to be back for this amazing race soon, especially now with the changes in the Women’s category.”

And Swedish marathon champion Jennie Sternerhag was also enthusiastic: “It is great that Epic is trying to do all this to make the ladies race better and more fair. I think those changes will make it more attractive to more ladies, and make it a more even race.”

Seven-time Absa Cape Epic finisher and former Women’s category winner Hanlie Booyens said: “The fact that the staff at Epic HQ listen to feedback and strive to keep evolving is commendable indeed. A separate start group for the UCI ladies will keep the racing much more open and fair.”

Absa Cape Epic spokesperson Chris Whitfield explained earlier this week that the new start batch was being introduced “to ensure that the women professional teams start on an even footing each day”.

“In the past a team that fell back on one particular day would start in a batch further back in the field on the next, making it very difficult to make up lost time and effectively handicapping that team.”

“It will improve the women’s race as a spectacle too,” he added.

The new rules about logos would ensure that strong pairings of women could ride together “and lead to the women’s racing becoming even more competitive”, said Whitfield.

The Absa Cape Epic’s team-based stage race model was unprecedented when it was launched in 2004 and there were no specific UCI rules for this type of event: the race organisers had to evolve them over the years. This has resulted in constant change and development.