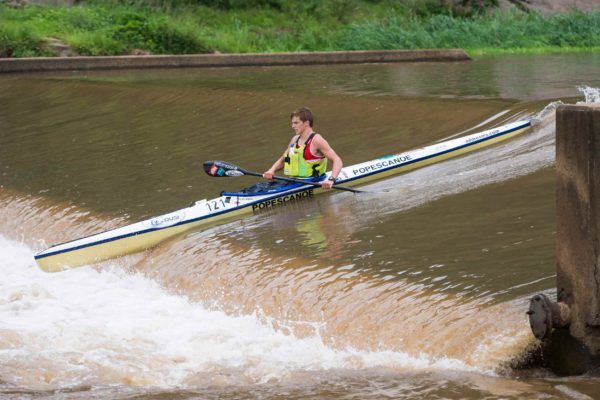 Having missed out on the previous seeding races, the likes Euro Steel’s Alan Houston (pictured) will need to perform well at this weekend’s Campbell’s to Dusi Bridge if he is to make up the points on the guys at the front of the seeding points for the FNB Dusi Canoe Marathon. Anthony Grote/
Gameplan Media

Pietermaritzburg – As time runs out for those hoping to get themselves a seeded position at the 2017 FNB Dusi Canoe Marathon paddlers’ focus shifts to the Campbell’s to Dusi Bridge seeding race on Sunday with the popular Dash ‘n Crash on Saturday providing all with a good pre-Dusi hit out with just three weeks until the three-race.

The opening race of the weekend is the 9km Dash ‘n Crash taking place on Saturday hosted by the Wykeham Collegiate and takes in the first 9km of the Dusi which will give paddlers the opportunity to brush up on their knowledge of what to expect during the race, in the rare luxury of water conditions that will replicate the Dusi conditions.

Despite the Dash ‘n Crash not being a Dusi seeding race, the event provides paddlers with the chance to experience and race the key obstacles in the first hour as they will be found on the 16th of February.

The focus for many will be the chance to gain vital seeding points during the Sunday’s Campbell’s to Dusi Bridge. The race’s route takes paddlers from the end of the Campbell’s Farm portage to the Day One finish at Dusi Bridge.

With a number of elite paddlers having not used the previous seeding races to get themselves a safe seeding in A Batch, this Sunday’s race is going to be vital to a large number of them which adds another element to the crucial annual seeding hit-out.

With FNB Dusi favourites Andy Birkett and Sbonelo Khwela currently sitting first and second on the seeding list going into this weekend there are some high-profile names that are nowhere to be seen on the current seeding list with one race to go.

Despite making a decision late in his preparation that he was going to take on the FNB Dusi Canoe Marathon, Euro Steel/Kayak Centre’s Hank McGregor will need a positive result from Sunday’s showdown if he is to make the front row at the Dusi.

Another pair of high profile absentees from the list of seeded paddlers are the Houston brothers. The pair of Andrew and Alan, both Euro Steel athletes, were in the mix in their K2 until the start of the third day of the 2016 Dusi, until Alan fell ill, will also need to be on top form at Sunday’s race if they are to push for top seeds.

The Inanda Dam to Durban outing just before the Dusi is not a seeding race and is an event where historically the elite paddlers do not assert themselves.

This weekend’s action does give the paddlers an opportunity to scope out the opening day of the contest and brush up on their skills in race conditions. The unique weekend of racing also gives the elites a chance to work on tactics on one of the most vital stretches of the Dusi route – the race can be won and lost on the first day.