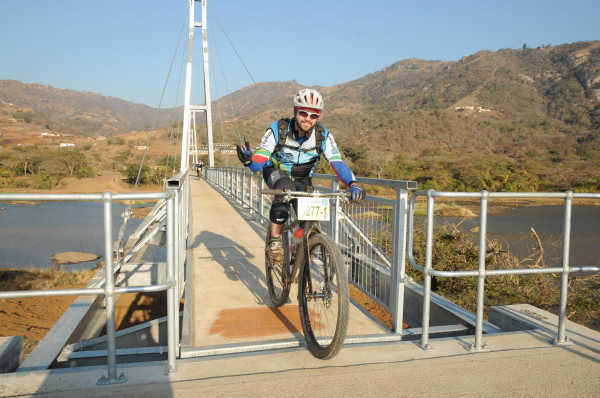 With just over a week to go until the 2015 edition of the BSi Steel dusi2c there are some big decisions to be made by the brother pair of Wesley (pictured) and Sheldon Booth as to whether they tackle the two-day adventure on single speed machines like they did in 2014 when the race kicks off at Camps Drift on Saturday 20 June. Jetline Action Photo/
Gameplan Media

Pietermaritzburg – Decision time has crept up on the Johannesburg single speed brotherly duo of Wesley and Sheldon Booth who are preparing to tackle their second BSi Steel dusi2c but are undecided about whether to once again take on the two-day adventure from Camps Drift in Pietermaritzburg and Blue Lagoon in Durban from 20-21 June on their trusty single speed bicycles or regular, geared two-wheelers.

The brothers took part in their first dusi2c in 2014 on their more strenuous single speed machines and despite confirming the pair will definitely be back again in 2015, they are yet to make the big decision regarding what equipment they will use second time around.

Younger brother Wesley understands the difficulty that comes with gear-less riding but has far from ruled out the option come 20 June.

“It is really hard work on a single speed!” Booth said cautiously. “Last year we didn’t quite know what to expect and the climbing on day one really caught us off guard.

“We had geared ourselves up for long, flat sections but it was completely different to that and we battled a lot towards the end of the day.

“We really enjoyed the second day though and that is what we are looking forward to again this year!”

With just over two weeks to go until the 2015 edition of the dusi2c the Booth brothers are running out of time to make a final call.

The laid back duo have been training hard though and Wesley feels that they are in fact in the right shape to tackle the race on their distinctive machines.

“We have been training hard.

“Then again, we aren’t racing snakes so we know that it is going to be a tough few days.

“We are really looking forward to doing another stage race on our single speeds though!

The pair’s transition into the weird and wonderful world of single speed competition isn’t a new one and is something the cycling brothers thoroughly enjoy.

“Sheldon and I train and ride a lot together and we have taken part in the national single speed championships so we have been doing it for a long time now.

“Single speed mountain biking was something that we always wanted to do so we took some old hard tail bikes and converted them and from there we were hooked!

“We have upgraded our bikes since then but the love for it is still very much there and we know that it is something that you either love or hate,” he added.

The duo are very much members of the a social element of the dusi2c field and will not be there to take themselves too seriously.

“The single speed community is quite a tight-knit one and everyone is always willing to go that extra distance for someone else and help out.

“A guy like Grant Usher is the man who brings in a lot of single speed equipment and he is always really helpful.

“Guys are always willing to help, which we are really appreciative of,” a grateful Booth mentioned.

Although the dusi2c is a race that follows the Msundusi and Mngeni Rivers from Pietermaritzburg to Durban and enjoys an average downhill gradient to the finish line at the sea, Booth knows that there are some tough climbs that have to be conquered first.

This challenge and previous experience of the race sees the younger Booth looking forward to taking part in the year’s race, regardless of whether it’s on his single speed or a more conventional, geared mountain bike.

“Riding on our single speed bikes is really fun and there is less chance of picking up mechanicals along the way but we know that it is not the clever choice.

“It really is something that we enjoy though and it is the ultimate challenge in mountain biking so we’ll just have to see.

“We never take ourselves too seriously and we know that the race is great fun so either way, we are really looking forward to the whole relaxed, friendly vibe that surrounds the dusi2c this year,” an excited Booth explained.

More information can be found at www.dusi2c.co.za