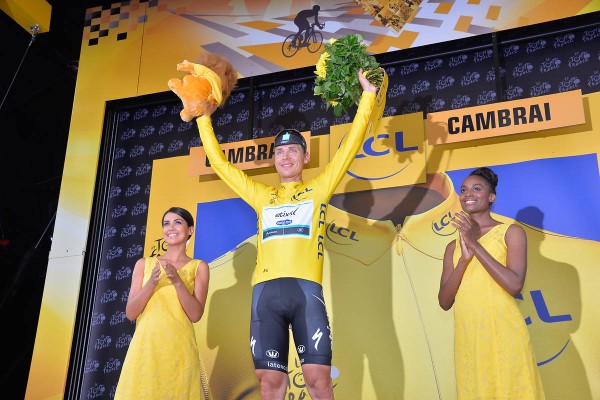 After missing out on the yellow jersey for three days in a row, Tony Martin (Etixx-Quick Step) made it in Cambrai after breaking away solo with 3.1km to go. He was a member of a front group comprising all GC favorites at the exception of Thibaut Pinot following a spectacular stage on the cobblestones in north of France. The German scores his fifth stage victory at the Tour de France and moved into the lead for the first time with 12 seconds lead over Chris Froome who didn’t try to hold onto the yellow jersey.

191 riders started stage 4 from Seraing to Cambrai flagged off by Philippe, King of the Belgians. As a consequence of the crashes the day before, former yellow jersey wearer Fabian Cancellara (Trek), Daryl Impey (Orica-GreenEdge) and Andreas Schillinger (Bora-Argon 18) were non starters. Lieuwe Westra (Astana), Thomas De Gendt (Lotto-Soudal), Perrig Quémeneur (Europcar) and Frédéric Brun (Bretagne-Séché Environnement) rode away from the gun at the initiative of the Belgian rider who was willing to showcase his team’s colors on home soil. The quartet got a maximum lead of 9.10 at km 37, after which De Gendt crested the only categorized climb of the day in first position atop Namur’s citadel.

All together with 40km to go

Fights for positioning in the peloton ahead of the first cobbled section increased the speed of the bunch, so the leading quartet only had 1.25 left on the Belgian pavés from Pont-à-Celles to Gouy-lez-Pieton. Team Sky was the most active team at the service of race leader Chris Froome. After the cobbled section, Alberto Contador, Nairo Quintana and Rigoberto Uran changed bike, the bunch slowed down and the advantage of the breakaway went up again. It was 3.55 at the feed zone in Binche. It was all together with 40km to go between the second and the third cobbled section. 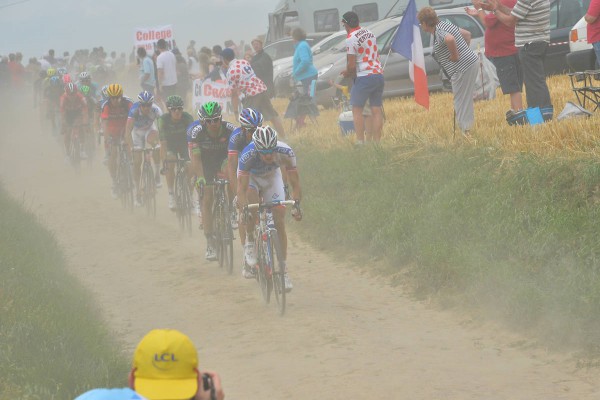 The dust, a classic on cobblestones in dry weather. – Crédit : ASO/B.Bade

Pinot out because of a mechanical

Alternatively, GC riders – mostly Vincenzo Nibali – and cobblestone specialists on the hunt for the stage win sped up on the cobbles but all favorites remained together until Thibaut Pinot (FDJ) had a mechanical in the second last section with 23km to go. The Frenchman was forced to stop twice and let his rivals go. The 35-man front group also included the main sprinters at the exception of Alexander Kristoff and André Greipel. Tony Martin had a flat tyre in between the last two cobbled section but he made it back into the leading group quickly with the assistance of his team-mates Julien Vermote and Michal Golas.

Martin attacked with 3km to go as everyone else looked ready for a sprint finish. There was no reaction from Team Sky. Chris Froome was obviously happy to abandon the yellow jersey to the German, so Etixx-Quick Step will be in charge of regulating the speed of the peloton in the next few days. Giant-Alpecin led the chase but it was too late. The triple world champion for time trial managed to stay away and cross the line three seconds ahead of his compatriot John Degenkolb. Even without Marcel Kittel, it’s a dream beginning of the Tour de France for the German riders who have won two stages in four days and lead both the overall and the points classifications with Martin and Greipel.