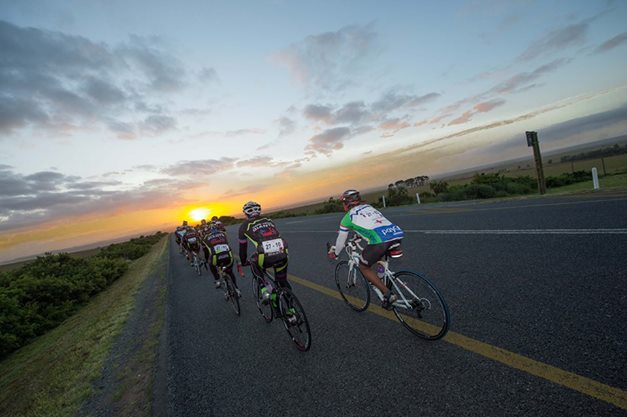 Cape Town, 19 November 2014) Defending Coronation Double Century winners Team Giant Durbanville A have thrown down the gauntlet to rivals threatening to derail their bid for a fourth successive victory.

“We are definitely planning on defending our title again this year,” said team captain, Hannes van der Walt. “We’ve been putting in the hours and have done a few training rides together. With key riders like Johann Rabie and Christoff van Heerden, we’re hoping to finish the route in five hours and 15 minutes.”

But Team Giant Durbanville A, formerly known as NuWater CVT, will have its work cut out on the 202km course, which starts and finishes in Swellendam on Saturday, 22 November.

A formidable challenge is likely from two teams put together by UK-based events company, HotChillee.  Last year HotChillee finished third and have again turned to a mix of local and international talent this year.

Ben Swift, a member of the renowned British outfit Team Sky and who rode the Coronation Double Century for the first time last year, will be back with local development rider, Nicholas Dlamini in the HotChillee squad.  Team captain Craig Edwards said: “We’ve managed to convince some top European pros to join us this year, and with the likes of Team Bulls riders Stefan Sahm and Simon Stiebjahn both our teams are going for podium finishes.”

Edwards added: “In the spirit of the Coronation Double Century, which is about solidarity and camaraderie, we decided to split the riders equally, meaning that both teams have pros, development cyclists and less experienced riders. We want the riders to go out there and have some fun on the day too.” He predicted that “the winners this year will need to finish in just over five hours to be crowned champions”.

In the women’s category, Team Velocity Sports Lab Ladies will be aiming to repeat their comfortable 2013 success, but want to go even faster and shave several minutes off their 2013 time of 6 hours and 22 minutes.

Team captain Mariam Stronkhorst explained: “While the team has remained predominantly the same as last year, there are one or two new riders who have joined us.  Our biggest concerns are definitely the first few kilometers, when the group is still trying to settle in, and the last 20km, when we’re tired and heading towards the finish line.”

“We have a lot of strong ladies this year and are looking forward to the event,” she said.

In the mixed category, Team Sure Global Travel won in 2013 as Team Give me a Chance and have an exceptionally strong squad this year. They include top Swiss mountain biker Konny Looser, local men Darren Lill and Waylon Woolcock and outstanding female cyclist Jennie Stenerhag.

Team captain, Delarey Brugman said: “We are certainly aiming to focus on our ability and doing our best, while also going out there and enjoying the route.” Team Sure Global Travel is riding the Coronation Double Century to raise money and awareness for the Give me a Chance Foundation.

While the first team to get six riders across the line in each category will be crowned champions, the Charles Milner Award goes to each full team of 12 riders which finish inside the allocated 10 hours.

Team My Training Day – which finished first in 2012 and third in 2013 in the mixed category – has converted to an all-male team with the aim of being the first full squad of 12 over the finish line.

The 12 cyclists that make up Team Reeds.co.za are tackling the 202km route on mountain bikes again this year.  Although there’s no prize up for grabs in this category the goal is to be the first full MTB team over the finish line on race day and they are hoping to clock a time of just under seven hours.