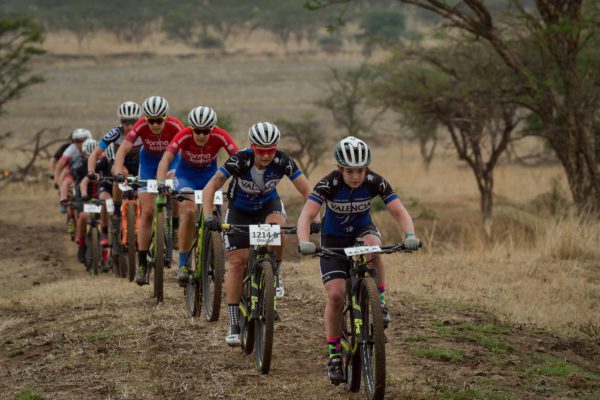 The Grindrod Bank Berg & Bush takes mountain bikers from the top of the Drakensberg escarpment near Harrismith and drops down into Kwazulu-Natal negotiating world-class single track into the bushveld and on to Winterton.

In the ladies race, Sam Sanders and Amy Beth McDougall (Valencia Ladies) consolidated their overnight lead with another stage win (2:28:07), once again getting the better of Candice Lill and Vera Adrian (dormakaba) in the closing kilometres of the race (2:30:11).

The Pyga pair of Buys and Beukes were home first in a time of 2:08:11 on the relatively short 60km day; day one’s winners, Nico Bell and Gawie Combrinck (NAD Pro MTB) trailing them by six minutes to claim second on the day (2:14:50).

With a slim overnight lead going into day two, Bell and Combrinck now have their work cut out for them after they suffered a gashed tyre 40km into the second day of racing. Their time loss allowed Buys and Beukes to open up an overall lead of around five minutes with one day to go.

“That was fun, a really great stage of mountain biking,” said Beukes. “The conditions were perfect and I think it was single track from start to finish. Of course, it helps that we won, but overall it’s definitely one of the great stages of cycling.”

For most of the day’s race, it was a two-horse tussle, with Bell and Combrinck sticking with Buys and Beukes. Disaster struck for NAD Pro MTB when Combrinck slashed his tyre while attempting to overtake the Pyga team on the last big climb of the day, Mike’s Pass. At first they inserted a tube, but eventually had to wait for Declan Sidey (Bells Cycling Kavuki Breeders TIB Insurance) to hand over a spare wheel. The delay gave Buys and Beukes ample opportunity to open up the gap.

“It was a fast start,” said Buys. “Nico and Gawie were with us from the start, but we really went out guns blazing and tried to force the pace. We just never stopped attacking; it worked out for us in the end.”

In the ladies race McDougall and Sanders were dominant again, finishing the day with huge, mud-splattered smiles. “Fun, fun, fun,” was McDougall’s assessment of the stage. “The trails were brilliant and we found ourselves riding alone for large sections, which was fantastic. Our aim was always to go out and attack from the start, which we achieved. Candice and Vera were with us until the last climb, where we were able to push on and away from them.”

Defending champ Lill was full of praise for the race leaders. “Amy and Sam are riding so well,” she said. “Today they were just too strong for us. We couldn’t match them for power up the last big climb and they pulled away. But we enjoyed ourselves out there. It was pure mountain biking fun. The trails are excellent and the cool weather made the riding really enjoyable.”

Day two of the Grindrod Bank Berg & Bush Descent was bushveld bliss for the 1000 or so riders taking part. With conditions overcast and cool once again, the field could tackle the likes of Ox Wagon Hill, Mike’s Pass, Puffadder Pass and Nicky’s Nightmare in ideal riding conditions.

The 60km day featured approximately 900m of climbing, but the hills were all short and sharp; enough to take the breath away before opening up into exhilarating single track trails.

The surrounding Drakensberg mountains, red soil trails and numerous acacia trees gave the day’s riding a truly African feel, and with the Tugela River flowing freely, day 2 is a riding experience that lasts long in the memory.

The two water points on the route are also staffed by enthusiastic Winterton locals, all doing their best to feed the riders more than necessary.

Day three is another short day, but features the iconic climb up Spionkop, a highlight for many and a horror for some as the equally tough Lantana Climb needs to be conquered first. The final 10km of the event though is riding bliss, with flowing single track allowing riders to race home with grins almost as wide as the event’s famous Bell Run berms.