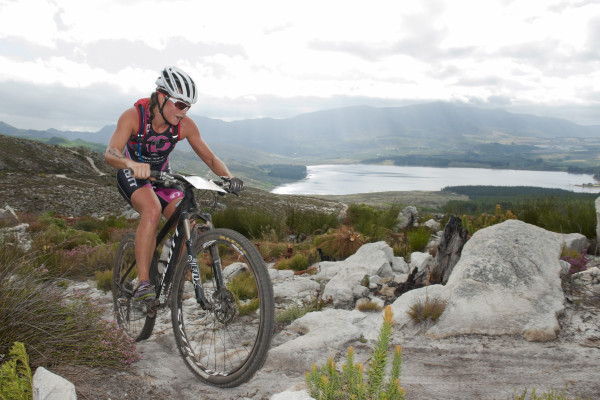 The Grabouw Country Club will be a hub of excitement this coming weekend when multi-sport athletes young and slightly more senior gather to partake in the largest XTERRA triathlon in the word, the TOTALSPORTS XTERRA Grabouw presented by REHIDRAT® SPORT. Reigning Totalsports XTERRA SA Women’s Champion and XTERRA World Champion Flora Duffy of Bermuda will attempt to successfully defend her title the weekend. See here: Duffy in action at the 2014 event. Photo Credit: Cherie Vale / NEWSPORT MEDIA

The Grabouw Country Club will be a hub of excitement this coming weekend when multi-sport athletes young and slightly more senior gather to partake in the largest XTERRA triathlon in the word, the TOTALSPORTS XTERRA Grabouw presented by REHIDRAT® SPORT.

With reigning champion Dan Hugo announcing his retirement from racing earlier this year, competition will be rife in the men’s race with a number of top XTERRA Warriors toeing the line to take over the reins.  Top SA contenders will include four times XTERRA World Champion Conrad Stoltz, Stuart Marais, Bradley Weiss and Theo Blignaut.

According to Stoltz, this just might be his final year of racing at this level.  “Grabouw is the birthplace of XTERRA in South Africa.  The course is a fantastic all round course – the perfect balance between fun, fitness and adrenaline.  It has become an iconic event.  Of course I would like to step out with a win on my home ground”.

For Marais, the crowd at XTERRA Grabouw is a huge highlight.  “I love racing in Grabouw.  The crowd is super amped and the SA competition is unmatched in XTERRA worldwide.  I have always said that XTERRA Grabouw should be a world championship. It has climbs, single track, plenty of rocks and sand. Everything an XTERRA should be.  I never start a race without wanting to win the XTERRA SA Champs is no different”.

Weiss has had a superb start to the XTERRA Season, snatching the title of Totalsports XTERRA Buffelspoort Champion in January followed by the XTERRA Philippines Championship title earlier this month.  “My passion for XTERRA and Triathlon began at this venue,” says Weiss.  “Being a home race XTERRA Grabouw couldn’t be more special to me.   My goal is most definitely to win my first XTERRA SA Championship title”.

Reigning Totalsports XTERRA SA Women’s Champion and XTERRA World Champion Flora Duffy of Bermuda will be seen defending her title in Grabouw on Sunday.  “I wouldn’t miss XTERRA Grabouw for the world,” said Duffy.   “There are so many things that make Grabouw a special race. It is the best organized and biggest XTERRA on the circuit. I love that there is a children’s race, a trail run, an XTERRA Lite and an XTERRA Full.  The whole community can get involved.  My goal is to successfully defend my title”.

The 2015 TOTALSPORTS XTERRA Grabouw presented by REHIDRAT® SPORT boasts with a whopping prize purse increase of R80 000, taking the overall prize purse to an impressive total of R249 000.

Taking the form of the South African Championship, the TOTALSPORTS XTERRA Grabouw presented by REHIDRAT® SPORT forms part of the XTERRA World Tour.  Athletes competing at this event stand the chance to qualify for the world championship final in Hawaii later this year.

Calling all trail runners!   Forming part of the action of South Africa’s largest off road triathlon the PUMA Trail Run incorporates the XTERRA trail run routes and will take place on Saturday, 21 February 2015.