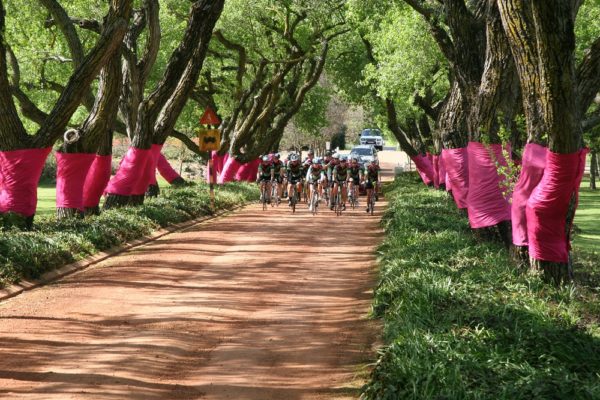 Charity organisation Pink Trees for Pauline, who raise funds to assist cancer patients, will be involved with the Bestmed Tour of Good Hope for the first time in March next year. Photo: Supplied

The Bestmed Tour of Good Hope is set to turn a brighter shade of pink next year and it will have nothing to do with the exhaustive efforts the cyclists put in to conquer South Africa’s premier road stage race.

Instead, organisers ASG Events have joined hands with charity organisation Pink Trees for Pauline for the first time to use the occasion as a vehicle to benefit the local community.

The Tour of Good Hope, won in thrilling style by Dimension Data’s Kent Main this year, will take place from March 5 to 9 from its new headquarters at the Drakenstein Correctional Centre on the road between Paarl and Franschhoek.

Set up in 2012, Pink Trees for Pauline work throughout the country to raise money for cancer awareness and to assist sufferers in the communities in which the events take place.

Next year, for instance, the organisation will approach businesses and individuals in Paarl, Franschhoek, Villiersdorp and Worcester – towns that dot the route of the Tour of Good Hope – to urge them to become involved.

Pink Trees managing director Adri van der Nieuwenhuizen said the initial objective was to sell as much material as possible to create the “pink effect” in participating towns.

“We approach the specific municipality to ask if we can use all the trees in town to make them pink for a specific period of time,” she said.

“We sell the pink material at R25 a metre and then the people involved wrap the trees to give it that beautiful look as you drive through.”

Van der Nieuwenhuizen said 80 per cent of funds raised were used in the local communities to assist those living with cancer.

“We work through the Cancer Association of South Africa (Cansa), who have a huge database of patients.

“For example, if patients need transport to receive treatment, we assist them with that, or in whatever capacity we can. The stories that have come through this initiative have been amazing.”

Pink Trees for Pauline are however not just about wrapping trees in material.

With the help of Johannesburg cyclist Dorian Wrigley, the Pink Trees initiative will be represented in the race by three eight-rider teams.

Having ridden the tour twice previously, Wrigley said he was enthusiastic about racing for the initiative, “as well as trying to give ASG Events and Bestmed as much coverage as possible”.

“This is a tour that I love doing and I am so pleased to be doing it for something more meaningful than just racing it.

“We are in the process of finalising the teams and I will be talking to a couple of ex-pros to come on board to help raise awareness.”

Wrigley said the teams would be a mix of men and women, comprising former pros, semi-pros and riders who just enjoy the challenge of the race.

Bestmed, who are also the title sponsors of the annual Cycle4Cansa Championship at Sun City, have a long history of supporting the fight against the disease.

For more information, go to www.tourofgoodhope.co.za.