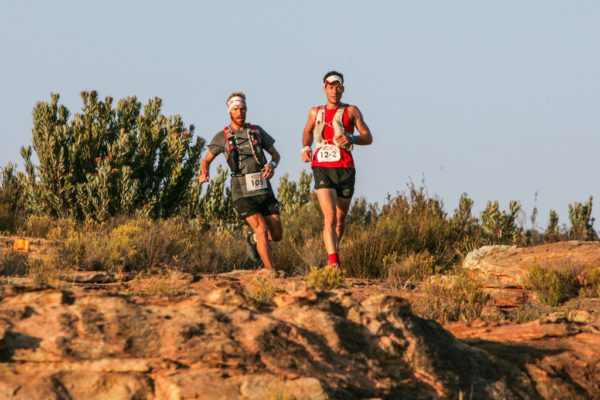 AJ Caltiz and Christiaan Greyling will team up, as they did in 2016, for the Tankwa Trail. Photo by Oakpics.com.

The second edition of trail running’s best kept secret, the Tankwa Trail, kicks off on Friday and promises three days of fantastic running and the best race village on the local mountain biking or trail running calendars. The event sees runners converge on Kaleo Manor, in the Koue Bokkeveld, for a clover leaf format trail run through a truly unique landscape.

The Tankwa Trail’s three stages take in thirty two, thirty five and twenty three kilometres respectively as they explore the orchards of the Koue Bokkeveld, the rugged slopes of the Witzenberg Valley, and the koppies and sandstone outcrops of the Gydoberg foothills. The stage distances are challenging and the terrain underfoot is ever-changing, with rocky hand-built singletracks providing the majority of the route. Stage one is run on hard-packed singletracks, ideal for a fast-paced start to the Tankwa Trail. Stage two features sections of sandstone slick-rock shelves; a tranquil pine forest; and a four kilometre section of rocky virgin singletrack, which is sure to be the toughest test of the 2017 Tankwa Trail. 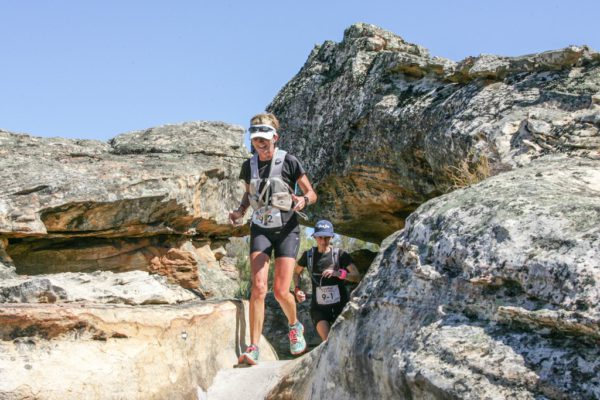 The tight and twisty trails, through the sandstone bolder fields, near the Kaleo Manor race village make for exhilarating trail running. Photo by Xavier Briel.

After two long and hard stages, stage three provides respite in terms of distance and altitude gained. It also provides a visual treat for the tired trail runners. The route weaves its way through the sandstone boulders, stacks and arches which littler the southern reaches of the Koue Bokkeveld, while climbing one particular koppie in the foothills of the Gydoberg to provide a spectacular view over the orchards and fynbos which stretch out towards the north.

In 2016 a number of South Africa’s top trail runners took part in the inaugural Tankwa Trail and for this year the elite field has grown, with last year’s participants Landie and Christiaan Greyling and AJ Calitz joined by Givemore Mudzinaganyama and Edwin Sesipi. The Greyling’s in particular have been effusive in their praise of the event. 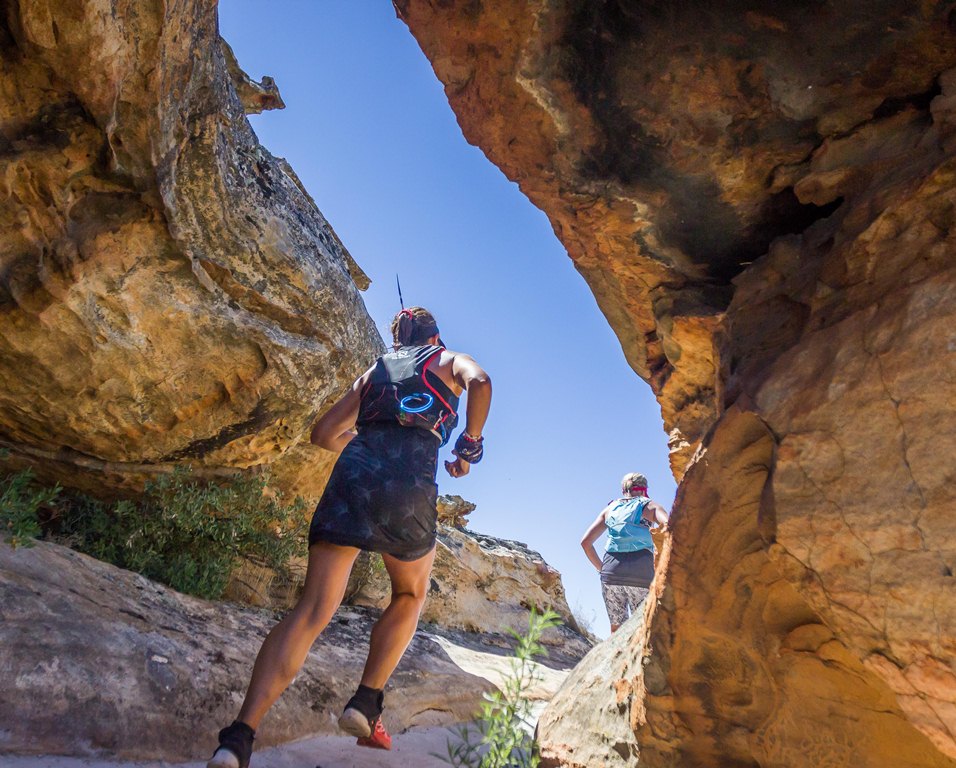 Running through the arches eroded from the rocks of the Koue Bokkeveld is one of the unique attractions of the Tankwa Trail. Photo by Xavier Briel

“The Tankwa Trail is all about camaraderie and sharing fun moments with like-minded people after running on the unique Koue Bokkeveld trails. The Dryland team will also treat you to a luxurious, vibey race-village, scrumptious food and some proper rest and relaxation” explained Landie Greyling, upon being asked why she was so excited to return for the 2017 race.

Her husband, and fellow Salomon athlete, Christiaan Greyling is looking forward to the “fun and fast trails, especially the tight and twisty ones through the rocks in the final kilometres of each stage.” He is also looking forward to what’s sure to be a fast paced race as he will be teaming up with Calitz again to take on Mudzinaganyama and Sesipi.

One of South African’s most recognisable trail runners, AJ Calitz, is “looking forward to some good vibes, great trails and the most epic scenery at Dryland Event Management’s Tankwa Trial.” After a successful 2016, where he broke Ryan Sand’s Fish River Canyon fastest known time and raced to numerous victories, Calitz is keen to ease into the 2017 racing season with the Tankwa Trail.

For the elite athletes the Tankwa Trail offers a unique mix of high paced running and a very relaxed race village. It is the perfect stage race to kick off the season; a good test of form ahead of events like the Cell C African X but without the stress which characterises many events. The keys to the relaxed race village is the idyllic setting on the lawns of Kaleo Manor, where the tents are pitched under old oak trees; the famously delicious food, catered for by Kaleo’s staff who are more accustomed to preparing for weddings than stage races; and the Dryland Chill Zone.

The Chill Zone has become a major feature at all Dryland Event Management mountain biking and trail running stage races. Runners and riders are encouraged to put their feet up, nap on a bean bag in the shade or chat about their experiences on the trails with their fellow entrants while relaxing on a comfortable sofa. Meanwhile they can help themselves to chocolate milks, Rhodes Quality fruit juices, spring waters, all manner of home-made treats and Fairview Cheeses. The chill zone also features a licenced bar where Fairview Wines and Cape Brewing Co craft beers further assist with the relaxation.

The Tankwa Trail also marks the first trail run since the launch of Biogen’s partnership with Dryland Event Management. As one of the leading sports nutrition, supplements and vitamin brands in South Africa Biogen will be providing Tankwa Trail runners with their nutritional needs at all the water points on route as well as offering a nutritional gift in the race packs.