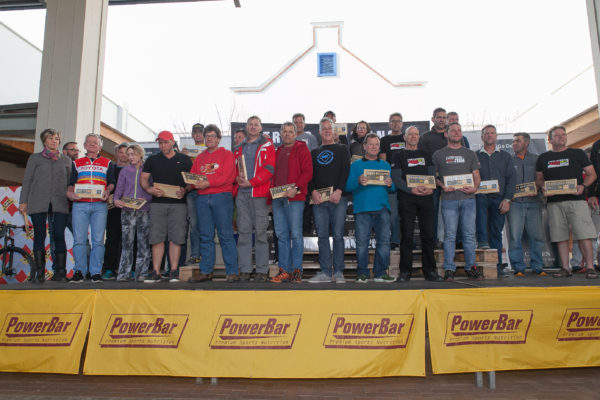 A week after the Trans Baviaans Race was won by the youthful team of Matt Beers and Tim Hammond, the experienced duo of Riccardo Stermin and  Andreas Studer (Team Power Bar) took victory in the Trans Baviaans Repeat  the pair clocked 9 hours 43 minutes and 7 seconds.

The Repeat is a replica of the Race.

468 teams made up of 2,3 or 4 riders took on the considerable challenge of riding 230km  from Willowmore in the Karoo to Jefferys Bay on the East Cape coast, traversing the remote Baviaanskloof en route.

2015 winners Studer and Stermin went into the Repeat uncertain about their race form.

Following an accident in November last year   Stermin spent 27 days in traction and a further three months on crutches to repair a broken hip.

The Repeat was the 54 year olds first race back since resuming riding in April.

“I stuck to my recovery program and when I began training for Trans Baviaans I hit decent numbers soon enough to know that I could do the distance. But racing is a different matter, thankfully I was able to draw on my experience. Andreas was very strong and helped me through some dark moments.”

After the mid-morning  start in Willowmore, the early undulations in the Karoo and the serious road corrugations shook the big group up, separating the pretenders from  the contenders.

The drop down the Nuwekloof Pass saw a group of 25 riders hammering along at close to 50 kilometers and hour.

After the first of six mandatory checkpoints at Geelhoudtsbos at 104 kilometers, Stermin and Studer used the climb up Baviaans Back to test their rivals legs.

” We were first in, refilled our bottles and first out and we just decided to attack on the first proper climb.” said Stirmen.

The crisp, clear air was in contrast to the cloud cover of a week earlier and gave the Repeat riders a wonderful opportunity to enjoy the spectacular views of the Baviaanskloof, which was declared a World Heritage site in 2002.

Studer and Stermin continued to ride at an even tempo and opened up a four minute gap over Boshoff and Gerber up the two Fangs climbs.

Studer edged ahead of his teammate and crested the M.A.C ascent first to claim the Power Bar King of the Mountains prize.

With 8 minutes in hand they could afford not to take any risks on the Big Dipper descent after check point 3 at Bergplaas.

The tussle for second place was intense as 10 year veteran and former winner Vicus Boshoff drove his young novice partner JP Gerber as hard a possible in an effort to close the gap. The relentless pace took a toll on Gerber and he began fading over the last forty kilometers. They were soon passed by Johan Coetzee and Jan Malan (Cadence Tyger Valley).

The combination of the early corrugations and a constant stiff headwind made for exceptionally tough conditions for the entire field.

There is nowhere to hide on the 25 kilometer Neverender climb and Stermins early aggression began taking a toll on the former road racer. Studer, who also has a road racing background did much of the work  on the  front into the wind as they pushed for the finish in the early evening.

In so doing they extended their lead to over 12 minutes and crossed the finish line at Fountains Shopping Mall after 9 hour and 42 minutes.

Both Studer and Stermin joined the five time finishers club and were unequivocal in their assessment of this years event.

” This was without doubt the toughest Trans Baviaans I have done, not so much the corrugations,that’s part of mountain biking, but it was the head wind that drained us ” said Studer afterwards.

Alma Colyn and Anneke Viljoen (KWP/ Helderberg Cycle World) took control of the Womens race from the moment they turned onto the Baviaanskloof road and were never passed, Colyn riding her third race and Viljoen her first finished in 11 hours 21 minutes and 11 seconds. Bridgitte Joubert and Tracey Campbell (Lunachix)were 51 minutes back with Leorine de Wet and Hanli Cilliers third.

Having won the mixed category in the Race last week with Neill Ungerer , Yolande de Villiers teamed up with husband Henties, Kevjn Taljaard and Wynand Mulder (East Coast Cycles) to win the mixed at the Repeat. They were 7th overall,in 10 hours 19 minutes and 46 seconds.

Race Director Zane Schmahl of Ecobound Events said the 2017 Trans Baviaans events, both of which were fully subscribed, had run very smoothly, although there was a surprisingly high rate of attrition.

“We’ve had worse weather in previous years, but the corrugations due to the drought and the head wind on both weekends played a role in the biggest rate of team withdrawals we have ever had.”

347 teams completed the Trans Baviaans Repeat,only the top three teams finished in under ten hours and the vast majority finished between 8pm on Saturday night and 6am on Sunday morning.

The slowest of them was a Tandem, team CHM in 22 hours 56 minutes and 15 seconds.

“I think this underlines just how tough the Trans Baviaans is. It seems it has lived up to its reputation as the toughest team single stage mountain bike race jn the world.” Schmahl added.

The Trans Baviaans, now in its 14th year, is one of South Africa’s most popular mountain bike events.

“Once again we are amazed at the fantastic support we receive from the mountain biking community, we were sold out in just 3 hours last year and,judging from the riders response this week we expect the same to happen  when entries for the 2018 Trans Baviaans Open on the 1st of December.” added Schmahl.

For more information on the event go to www.transbaviaans.co.za