Trans Elands proving to be a tough one 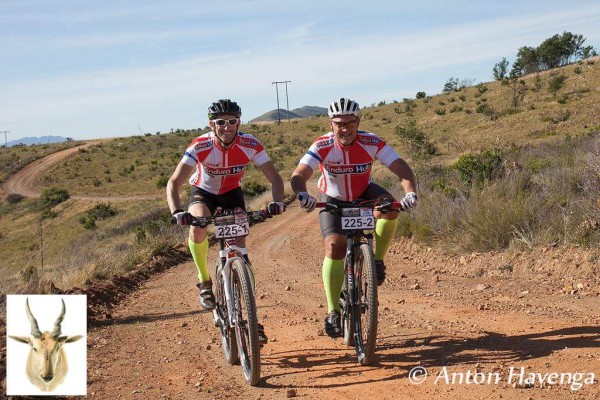 Kevin and Jacques halfway up the biggest and longest climb of the day. Photo Credit: Anton Havenga

The event started off quite chilled! At a mere 8 degrees at 07:00, it was freezing cold! As locals we knew that Lex was going to throw in a few hills early in the race, and twenty minutes into the race it became very hot. All we wanted to do was to shed the second skins, but we decided to keep it on till the first water point. It was a quick in and out and we decided not to push to hard, as it was going to be a long day in the saddle. We knew too well that SPIKI (read: the sun) was still going to hit us hard. We simply pushed on and slowly started to crawl our way through the field.

We eventualy reached the second water point, but opted not to stop. This was the last one before a very long climb up to the mast. After a nice decent to Patensie we reached the third water point. We refuelled, grabbed something to eat and after a quick lube at the Coimbra’s Tech Zone, we were on our way. We assumed that the steepest climbs were over, but then reality kicked in. We had to climb all the way to the next water point, passing through orange trees and rural roads. We reached the water point, grabbed some banana loaf slices, refilled the bottles and took a minute to get our sanity back. 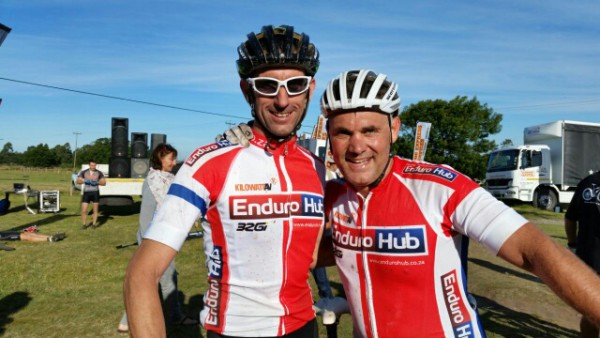 Kevin and Jacques as the passed the finishing line in 10th position.

Once again it was up and down (read: more UP). We caught up with a mixed team that had problems with their chains. We quickly stopped to help, but it ended up not to be a quick stop. The chain got jammed between the BB and crank so I had to break the chain to get it out and re-joined it with a master link. After that hold up, I said to Jakkals (read: Jacques) to sit tight and bite deep. We hit a nice piece of tar, and even as mountain bikers that don’t like tar, this felt like heaven on earth right up to the next water point. After a quick refuel, we were off. We knew one more climb was waiting on the R331, but then Lex threw a major spanner into the works.

We unexpectedly had to turn off into a road I didn’t even know existed. This hill really tested our legs. We reached the top and went into the single track of the three river trails, and what an awesome section it was! I think we would have enjoyed it more if we had fresher legs though. Then we went though Crossways, some more district roads and eventually we hit the Train Bridge where we had to porch, as it was compulsory. This was also the last few kilometres to the finish, but this stretch of road felt like it was a 100 kilometres long. We reached the finish both still in one piece. It was a very good, hard work-out and we will definitely be back next year.