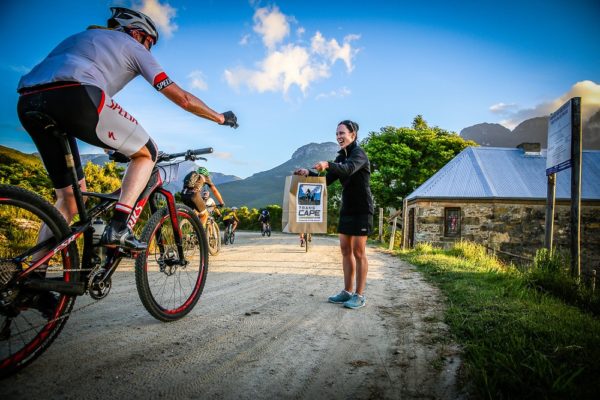 The Liberty TransCape MTB Encounter will again raise funds during the seven-day race from Knysna to Franschhoek in the Western Cape starting on February 4 to support Africa Foundation. Photo: Irma-Marren Coetzee

The Liberty TransCape MTB Encounter, a seven-day, 614km race to be held next month, will be part of a concerted drive to support Africa Foundation.

The event, supported by STANLIB and Volvo, begins in Knysna on February 4 and ends in Franschhoek in the Western Cape on the tenth.

Now in its fourth year, the race is an ideal opportunity to generate funds for people in need.

Race founder Lenore Collett says raising money for charity has become an integral part of the race and the organisers will continue those efforts.

“This year we are focusing on raising funds for Africa Foundation, an organisation I have been involved with for 10 years and which is very close to my heart,” she said this week.

“Africa Foundation is the charity arm of And Beyond, who own luxury safari lodges across Africa.”

The organisation’s main objective was to empower, in various ways, the communities that surround their reserves,” she said.

“They build schools, install enviro toilets and create bursary programmes for learners. Conservation is also a huge part of their focus.

“This ties in with our ideals, of having a passion for conservation in the country and empowering people as much as possible.”

Specific projects under Africa Foundation’s umbrella will be chosen once they know how much money will be available.

“We will have brochures that will be handed out to the [270] riders during the race, and Gerald de Kock and his fellow MCs will promote the charity throughout.

“We will sit down soon to decide on specific strategies for the fund-raising during the seven days.”

Africa Foundation chief executive Francois Peenz said it was extremely important for them to have the support of events such as the TransCape.

“Our projects are identified by communities, and agreed upon in consultation with our regional teams,” he said.

“However, it is only through the support of donors that the projects can be funded and become a reality.

“Without groups like TransCape raising funds and spreading the word of our organisation, we could not exist and support the development of communities and the preservation of Africa’s areas of natural beauty.”

Peenz said Africa Foundation was a non-profit organisation whose purpose was to uplift, up-skill and empower identified rural communities living near core conservation areas in Africa.

“We believe that supporting communities in their development leads to sustainable conservation, which is critical to the preservation of Africa’s wildlife and areas of natural beauty.”

He said the organisation produced a project menu for each region in which it operated, based on the needs identified and prioritised by the communities.

“From this list, donors can select a project that they feel most compelled to support or they can donate towards a priority project in a region of their choice or focus area.

“Africa Foundation’s inclusive methodology ensures communities’ needs are met in consultation with their leaders, the relevant arms of government and the specifications of our donors,”said Peenz.