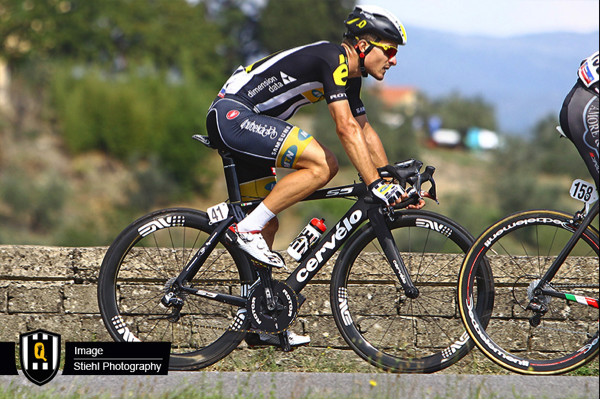 As has been the case in the last few Italian one day events, the standard break of the day was not really allowed to form as continuous attacks saw the dynamic of the race change regularly. Initially Jaco Venter was part of a big group of 17 riders who got up to 50 seconds ahead of the peloton but they were quickly shut down.

Eventually, when there was only 70km left to race two riders got away and manged to pry open a 2 minute lead. Astana and Trek were keen to work on the front and this was to the detriment of the duo. With 25km to go it was all brought back together but only after the peloton had felt the effect of the tough climbing course and been reduced to less than 30 riders.

MTN-Qhubeka p/b Samsung had Kristian Sbaragli in the front group, where he has so often found himself this year. A few attacks kept the pace high but it was thanks to the stellar work of Fabio Aru (Astana) that Nibali could launch a solo attack with 2.5km to go. Kristian managed to jump with the first counter attackers but they would not catch Nibali. After a small group joined our Italian, he would cross the line for a hard fought 6th position.

Kristian Sbaragli – Rider
The race was really hard and fast right from the start. On the last climb before the finish Nibali attacked and I was just behind him with Pinot and Rebellin. A bit further up the climb a small group came back to us and we would end up sprinting for 3rd on the day with one other rider also getting a small gap in the final meters. At 400m to go I was at the front of the group so a few guys come over me from behind and I couldn’t get the best result.