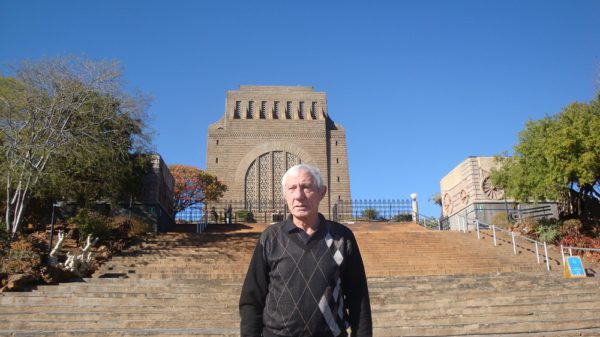 Tshwane Classic race spokesman Mauritz Meyer stands in front of the Voortrekker Monument, which will be the start and finish venue for the 98km road classic on November 5. Photo: Supplied

As the nation’s capital, Pretoria has a rich historical legacy which the city fathers are keen to promote when the Tshwane Classic road cycling race is held on November 5.

Put on by ASG Events, the organisers have big plans for the 98km road classic, which they aim to grow into one of the big city races in the country.

Besides the racing aspect, which will see total road closure to ensure rider safety, race spokesman Mauritz Meyer, who works alongside ASG on the event, said they also wanted to promote the historical significance of Pretoria.

“There are a number of famous landmarks along the route and we are working with the municipality to create awareness of these among those who are riding.”

His view was backed up by Tshwane executive mayor Solly Msimanga, who said the metro had thrown its weight behind the race to make it one to remember.

In illustrating a significant connection between Pretoria and cycling, the mayor referenced the historical role of bicycles in the history of South Africa.

“During the South African war (1899-1902), commander Danie Theron asked permission from the ZAR (Zuid-Afrikaansche Republiek) to establish a bicycle corps to use for scouting instead of horses,” said Msimanga.

Meyer outlined a number of the significant landmarks, starting with the Voortrekker Monument, which will be the start and finish venue for the race.

“The building by architect Gerhard Moerdijk was completed in 1948 to honour the Voortrekkers who had left the Cape and travelled north in the first half of the 19th century,” he said.
“The riders will also go past the Kgosi Mampuru ll Correctional Centre, which was formerly known as the Pretoria Central Prison. This was the official site of punishment for political activists during the apartheid era.”
He said the route would take cyclists past the Kruger statue in the centre of Church Square, a landmark commemorating former South African president Paul Kruger.

“This statue was designed by Anton van Wouw and moved to its present position from the main railway station in 1954.”
Also on the route are the Union Buildings, which house the executive arm of the government and were designed by Sir Herbert Baker and completed in 1913.

“A statue of Nelson Mandela, first president of the democratic South Africa, is at the front of the buildings,” said Meyer.
“Another major landmark on the route is Freedom Park. It was completed in 2004 and is a memorial to honour those who sacrificed their lives for freedom.

“It also celebrates and explores the country’s diverse people.”
Msimanga said they wanted to welcome all cyclists to their historical city.

“As you can see, the city has many interesting attractions and places of historical value. This race will be unique on the South African cycle calendar as it will also be a tourist route.”

While the elite riders and adults tackle the road races over distances of 98km and 60km, the younger generation will be fully catered for with a series of events within the race venue at the Voortrekker Monument.

Go to www.tshwaneclassic.co.za for more information.