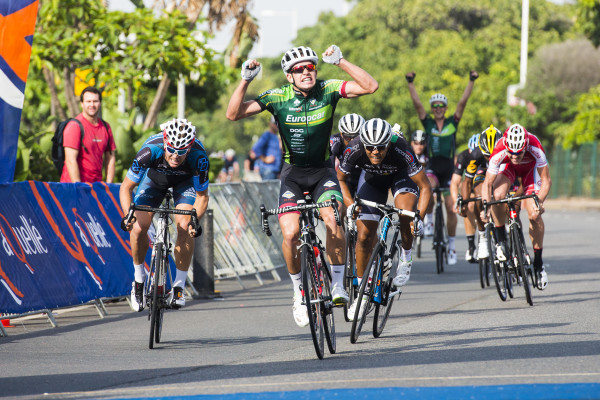 Durban – Europcar’s Ryan Gibbons brought the five-year Team Abantu reign at the aQuellé Tour Durban presented by Sunday Tribune to an end with a thrilling victory in the men’s 105km race, while Cherise Stander (RECM) came out on top of a see-saw end-sprint that saw nine riders challenge for the women’s race laurels.

Racing in balmy clear and calm conditions the cagey elite men’s peleton made few serious attempts to break away, and the one splinter group that adventured away 25 kilomteres from the line was quickly brought back by the assertive Europcar team.

That set all the major teams up for the lead-out over the two tricky right-hand corners into the finish outside the Moses Mabhida stadium.

Defending champions Team Abantu looked well placed to send Rynhardt Butler to the line to defend his 2014 title, but when the call was made by captain Nolan Hoffman for the sprinter to assert himself, he wasn’t able to respond quickly enough and the Europcar train took charge at the final turn, sending an elated Gibbons to the line just ahead of Westvaal’s Tyler Day with triple champion Hoffman in third.

The 20 year-old from Randpark Ridge in Gauteng, was thrilled to win the 22 edition of the Durban classic and end the five years of dominance by the Durban-based Abantu outfit.

“We have finally got the Tour Durban monkey off our back!” said Gibbons. “Somehow we have never done that well in races in Durban, so we came into the race a little ‘under the radar’ but with a lot to prove, so we are thrilled with the win,”

The five strong team rode a tactically astute race and showed the form that took them to victory in the Mayoral Race in Polokwane last week and second place in the Emperors Palace Classic the week before.

“In the beginning things were quite negative, and even going up the climb to Pinetown there were a few attacks but nothing stuck,”  said Gibbons.

“We were all a bit intimidated by the Eritrean guys in the MTN Qhubeka Feeder team, but then we just felt that we shouldn’t play anyone else’s game but stick to our own.”

“Going up the M4 a five-strong bunch broke, with most of the team’s sprinters. Our guy in that bunch James Reid is very strong but no a sprinter per se so we had to take control and caught them.

“This is a major race on the calendar so we are very chuffed with the result,” said Gibbons. “It gives us a lot of confidence going forward. Hopefully we can repeat this in the coming week of UCI races,” said Gibbons. 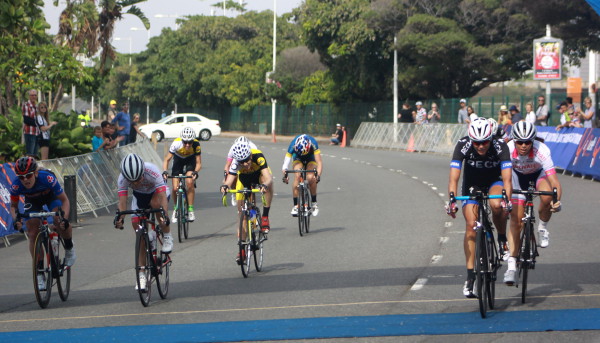 The women’s race lived up to it’s billing as a clash of the champions, and culminated in a nine-rider breakaway that held all the way into the home straight, where RECM star Cherise Stander powered down the left of the finish lane to edge out 2013 champion Lynette Burger Pieterse (Activate/Demacon) and the defending champion Lise Olivier (Time Freight eTeam).

“It was really exciting, incredible racing from all the girls here,” said Stander. “The racing was so positive, super-intense and there were so many attacks.”

Stander was part of the assertive group that drove a strong attack going up the climb into Pinetown that splintered the elite women’s peleton and sent a breakaway group of nine riders to the front for the remainder of the race.

“Activate/Demacon were very aggressive during the race,” she added. “They work really well together as a team. We tried to split up the group before the end sprint but that didn’t work and all nine of us came into the final straight together!”

Stander, who carries massive sentimental support with her wherever she goes following the tragic death of her husband and MTB icon Burry Stander, said the result was very significant to her personally.

“Its been a really long two years and I have worked hard to try and get back to it. I am really happy that slowly but surely things are starting to fall back into place,” she said.

The women’s King of the Mountain hotspot went to An-li Kachelhofer (Activate/Demacon) and while Charlene du Preez (Clover) took the Sprint Hotspot.

Meanwhile the 55km cyclocross event was the source of huge interest as established MTB star Darren Lill won the event, gambling hugely by racing on his road bike.

The women’s title fell to the classy Candice Neethling (BMC-SA), racing away from the evergreen veteran and defending champion Nathalie Bergstrom.

The ideal weather conditions left the huge field of social riders who ventured up the recently resurfaced M4 on the 45km Fun Ride enjoying the security of the full road closure and the sublime riding conditions.

The days racing concluded with the Sunday Tribune Kids Race which was well supported by dozens of eager youngsters supported by their parents for the 1km non-competitive outing. In some cases parents who had completed their 105km or 45km ride were found wanting and struggled to keep pace with their offspring.