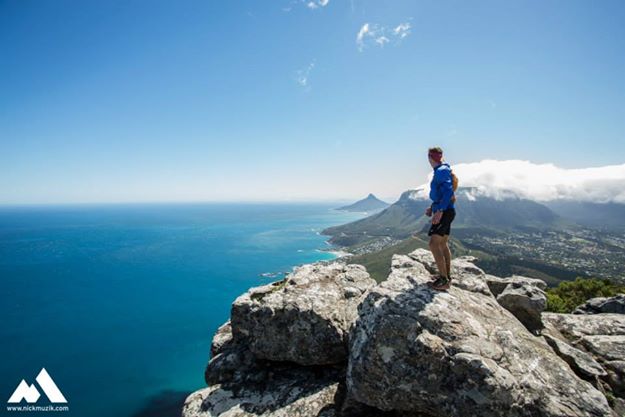 I decided to take part in the Ultra Trail CT race as I thought it seemed like a good challenge. I initially wanted to enter the 100km just for kicks, but then I saw the qualifying times and route, I quickly changed my mind. 62km I thought, that’s nothing: I have run Comrades, 2 Oceans, 2 full Iron Man races and 5 x 70.3. Also done African X, Crazy Store TM Challenge and various other races that made this 62km seem like just another day on the mountain.

Well well well – on race day I was brought to my knees literally. A friend from JHB who has done the Skyrun and the Puffer also joined me – post race he said the Puffer was a joke compared to this race. I had said to my wife – 62kms will take me 9hrs as 90km Comrades only took me 10h30. Get the fire burning as I will be home for the start of the Currie Cup final. 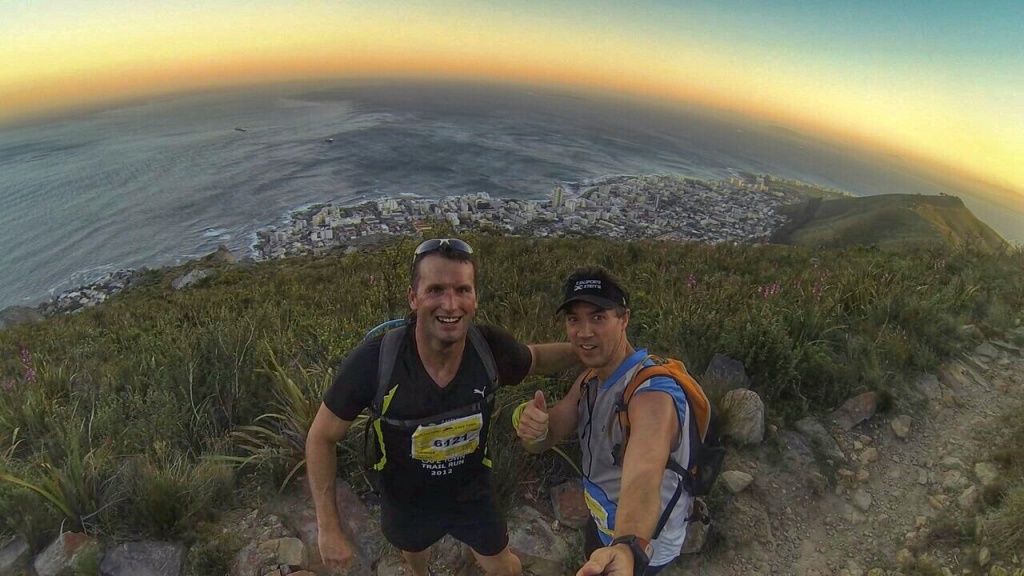 Needless to say I saw the last 15 mins as I came crawling in at 13h09. Wow what a tough race but definitely something I will do again and encourage others to do. If you have ever run a trail on the mountain you have to do this. Saying this race was well organised is an understatement. This trail race certainly matched it’s international and national equivalent events. So well organised I cant even begin to explain.

From the frequency of checkpoints, to the food, amount of helpers at each table etc. Just so amazing. 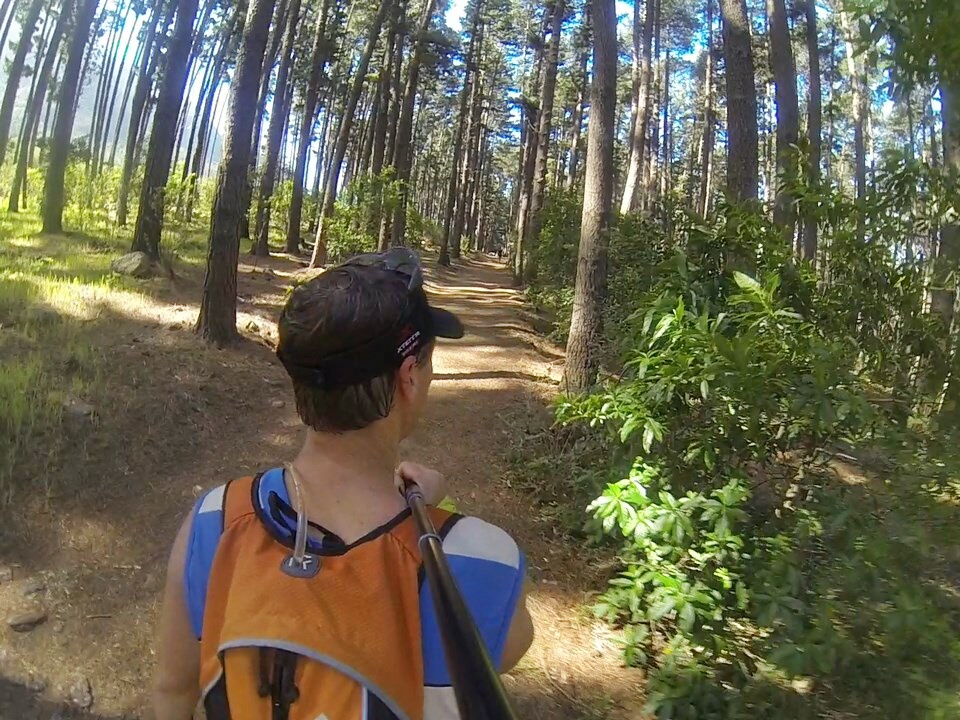 The route was meticulously thought out with plenty markers you could not miss. We started at Cape Town High at 5am. Run through the city up into the highest part of Bo Kaap. I was already walking on that hill and could see the headlights of the 100km pro’s already trailing up Signal Hill. We did the single track up the back and by the time we got to the top it was light. We ran around Lions Hill on the upper single track and came down and crossed over to the top of Kloof neck. Stage 1 done 9km. We were greeted by TV cameras from SABC’s Expresso, food and drinks.

From there we went up the mountain and trailed across the contour path before joining up on Platteklip. The wind was howling and the famous tablecloth was pouring over the top. By the time we were ½ way up the wind was so strong I had to pack my GoPro and peak-cap away as everything was getting blown away. Wind chill played a factor and on top of the mountain we had about 20m visibility. Icy cold conditions and pumping wind made me want find a hole and hide out. Small groups of runners seemed to form as safety was no.1 priority in these conditions. We ran to Maclears and around the damn. Check point 2 was a welcome sight as I settled for a hot cup of Milo. The table was full of munchies, ranging from health bars to huge bags of choc peanuts.

I decided there and then to dump the food I had brought along in my hydro as it was not needed as catering on route was phenomenal. The race required we take food and certain safety kit with such as a whistle, space blanket, head torch and cellphone. This kit was checked and photographed at registration on the Friday as well as at random check points on the day. 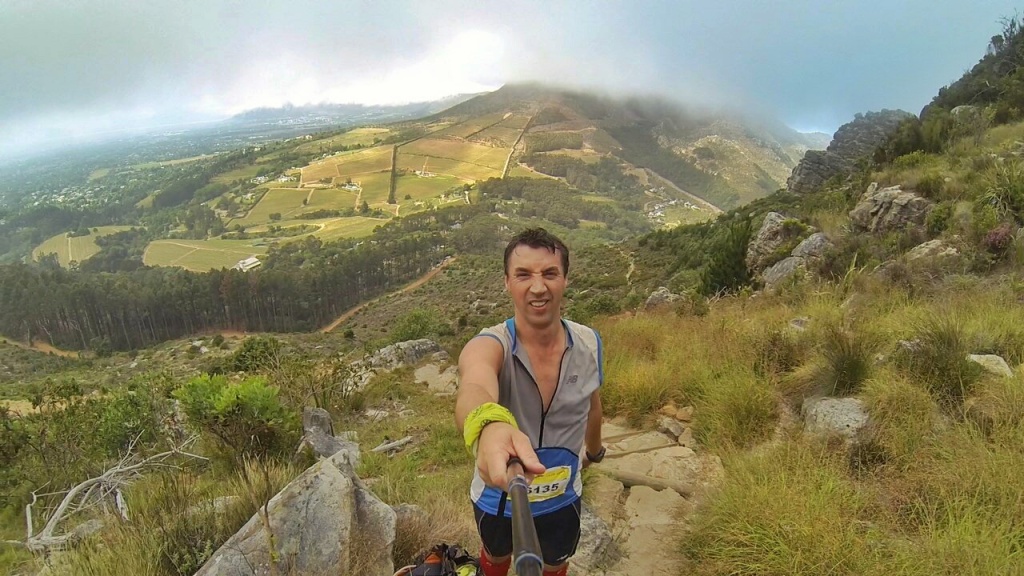 The route then took us along the mountain to Constantia Neck. Stunning views along a tricky hikers single track. The weather improved considerably and it got really hot. The 62km runners went from there towards Constantia where we ran through various farms with deadly climbs. The next checkpoint we had a chance to do a wine tasting on the grass which I declined as already drunk 4L of fluids by this point. The 100km runners (30 of them) had gone on towards Hout Bay for their extra leg. 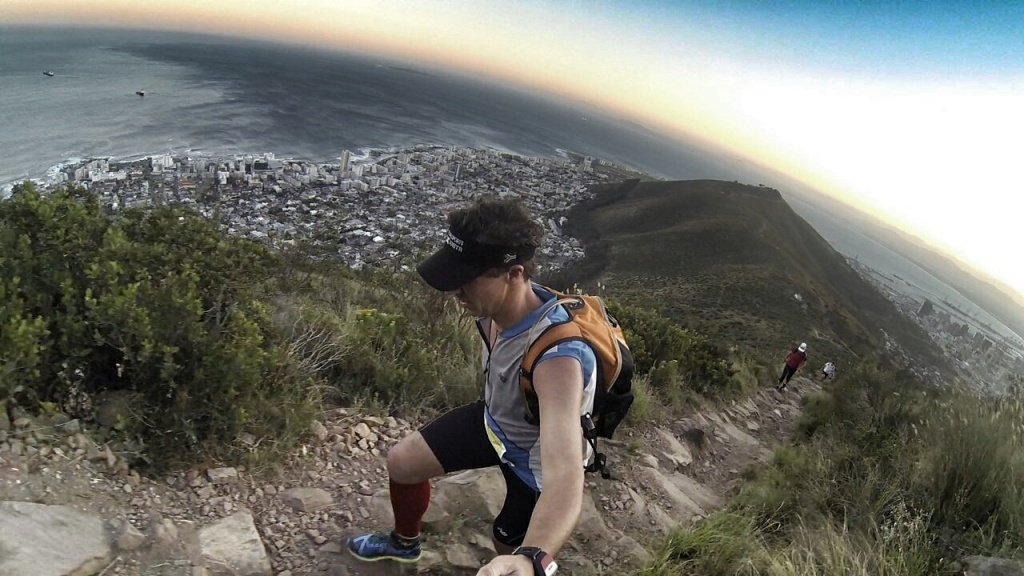 The 1st 30km took my group about 5hrs. This included about 10 stops for selfies as you cant do a race like this without enjoying the scenery and taking in some memories. By looking at the race profile I thought the 2nd half of the race was easier – boy oh boy was I wrong. This took us over 7hrs. The Constantia section was really tough and followed the route of the 21km Grape Run and the Rhino trail run. By this time the sun was beating down and a few people had a dip in the dams. 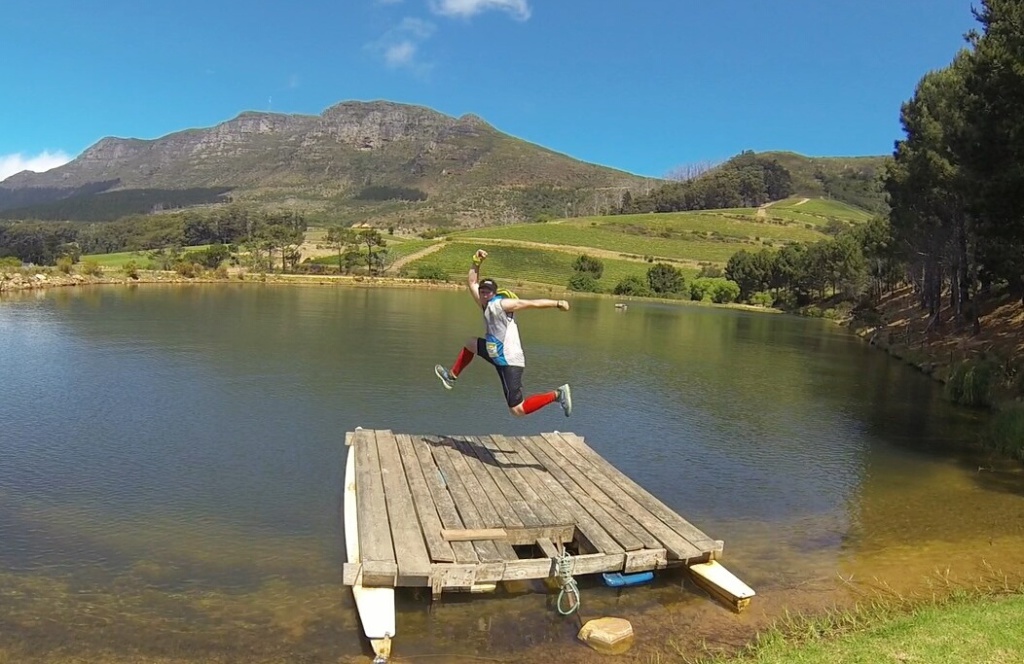 The next section was basically the 2nd leg of the Crazy Store Challenge – in reverse. About 15kms of uphill single track and forests. The checkpoints were placed to perfection – my favourite next to a waterfall which allowed us to strip down and take a swim. At the 40km mark the 1st runner (Eric Ngubane) of the 100km flew past us. Already done 40km more than us – left me with my mouth wide open in awe. 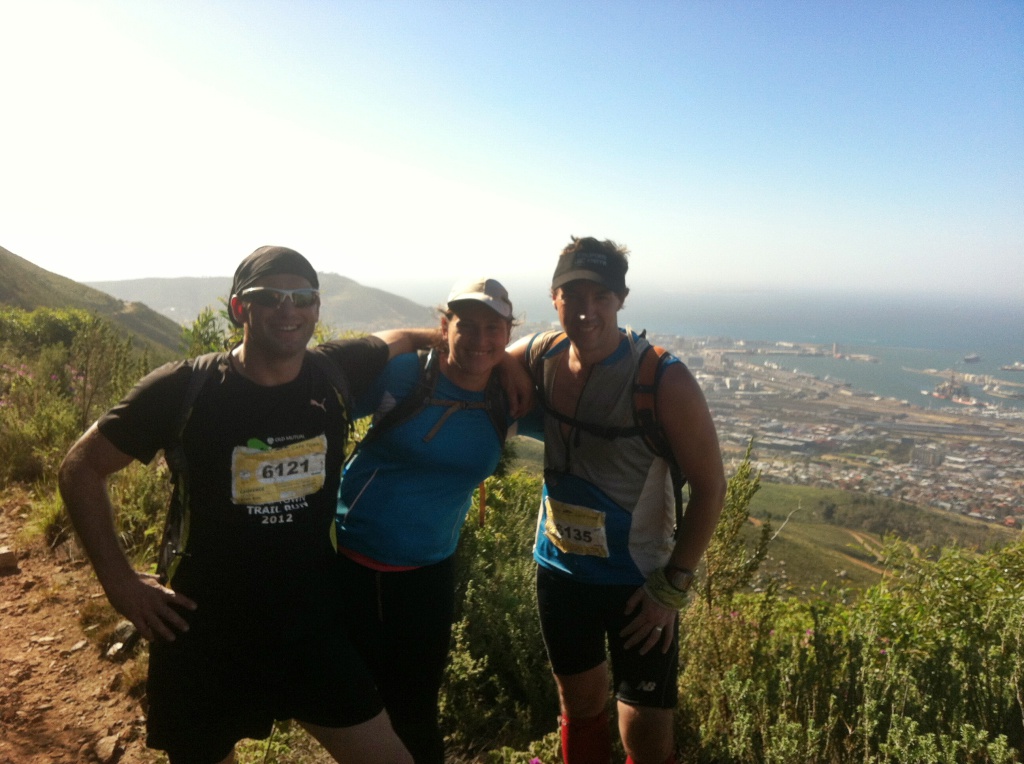 I must admit my toughest section was the 4 million stairs we climbed though the forest. There was a board that said 400 to the top of the trail – but took us about 30 mins to get there as cramps started to set in and we had to navigate around a massive bee hive. We eventually got some downhill and came down into Newlands forest. It was at this stage that 2nd, 3rd and 4th place in the 100km came past us – about 10 mins apart. You know you racing along the big guns when 8 x Iron Man winner Raynard Tissink is in 4th place about 1h behind the leader. 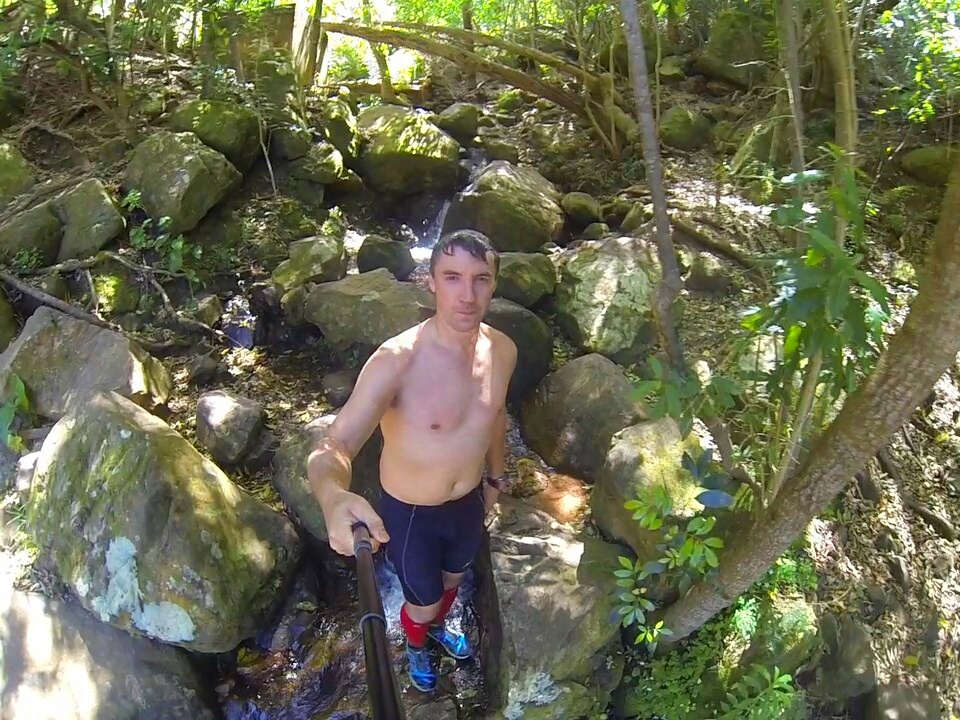 The next killer section took us down to UCT where a big check point was – thanks to Red Bull we could help ourselves to as much as we wanted – sad to say I had 3 and no wings came from that. We then went up to Rhodes Memorial, then back up all the way to the Block House. The wind was pumping and I was very dehydrated. The last section across to Devils Peak had some amazing city views. A very tough last 5km traversing down the mountain into the top of town and running down the steepest of tar roads to CT High.

Coming across the line with my friends Laurence Buchanan and Elize van Staden was the most amazing feeling. I don’t think you could do this event on your own. You need the motivation and support. The finish area was a real surprise with a big screen TV with the rugby on and free Butlers pizza and beer! 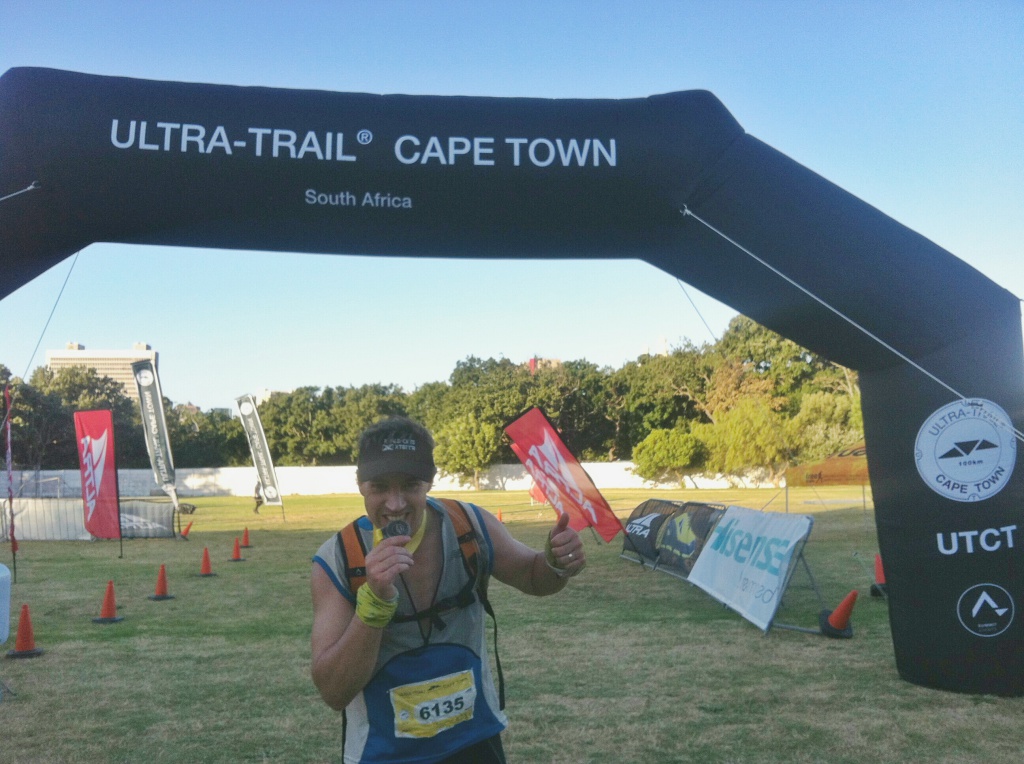 All in all this was an epic event. You will not see better views in your life. Also the best organised race on par with an IM race. If you’re looking for a challenge – then enter next year. The cut off times for both 62 and 100km was 15 hrs. The 1st lady for the 100 (Nicolette Griffioen) came in at 13h18 whereas the men’s winner was 10h41(Eric Ngubane) . the 62km winning time for men was 7h34 (Victor Gugushe) and ladies was 8h38 (Marilyn Fishcer). To qualify to race the 100km next year you needed a 9h30 on the 62km route. the race had a few cut off areas which was strict and took in a number of casualties unfortunately. But it would not have been safe to race in the dark so it was for the best.

Race director Nic Bornman is a legend. Thanks for the best race event of my life!