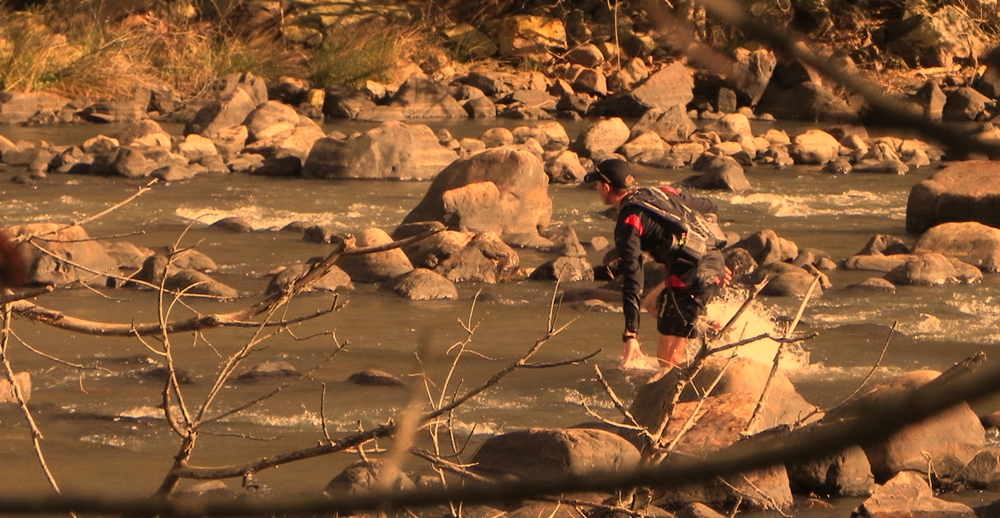 18 year old Marcus Prinsloo surging at the first river crossing in the Umgeni River Run 50km. He took the lead shortly after this and won the race by almost half and hour

The 4th Umgeni River Run took place on Saturday 30 August from Maweni Trail Centre on the Table Mountain Road just outside Pietermaritzburg. The day started badly when the medical crew were involved in an accident on the way to the start of the race. It delayed things slightly and would prove the only major incident of the day, the rest of the race went off swimmingly, especially for Marcus Prinsloo, an 18 year old who announced his arrival on the ultra trail scene by sweeping the opposition away and taking the honours on the 50km finish line by almost half an hour. The ladies race was a more preditable affair when ultra running legend Tracy Zunckel winning comfortably.

But more about Prinsloo who showed remarkable maturity executing a race strategy that saw him only take the lead with less than 20km to go. Justin Short, who finished second, managed to “get away” in the first major climb, Prinsloo used the technical river crossings to his advantage and passed short on the second and final crossing. Short was happy to let him surge thinking that Prinsloo might break in the late stages of the race, but it was not to be as Prinsloo cruised down the final decent and into the finish looking like he could easily maintain his pace for longer. A time of 4 hours and 14 minutes meant that he averaged just over 5 minutes per kilometre, which for a tough and technical course is quick.

In an interview with Prinsloo in the days after the race he gave credit to farm upbringing “The reason I started trail running has a lot to do with the way I grew up. As I’ve mentioned I’ve been privileged to grow up on a farm and so a love for the outdoors is something that was instilled in me at a very early age,” said Prinsloo “I also enjoy a good physical challenge and trail running combines this with my love for the outdoors.”

It is incredibly exciting seeing young trail runners like Marcus Prinsloo come through the ranks, he finished off his interview by saying “When I started learning about guys like Ryan Sandes and Kilian Jornet and the incredible experiences they have I was hooked and have been running and racing more and more ever since.”

The Umgeni River Run lies at the heart of KZN Trail Running’s explorations into adventurous events. It is stripped down to the basics and offers competitors a pure trail running experience. A shorter 25km and 10km course also take place on the same day as the ultra, giving everyone a taste of the magic. “The trail experience offered here is very personal and intimate” race director Andrew Booth said, “At the Umgeni River Run we keep it pure and simple, it’s all about a beautiful trail. It has always been a small race and may grow in time when more runners become attracted to its simplicity. The trails do the talking here.”

The 25km race was won by Andrew Erasmus and Hillary Bruss. The 2015 events will take place on a new date, so watch this space.