Umko triumph for McGregor and Birkett 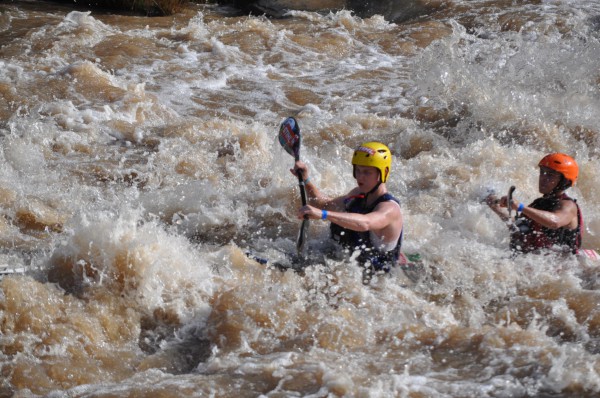 Jordan Tupper and Evan Knight took on the wild water at the 2015 STIHL Umkomaas Canoe Marathon over this past weekend in what were described as great conditions for paddling. – Gary Knight/
Gameplan Media

Josephine’s Bridge – The unlikely yet potent combination of multiple Marathon World Champion Hank McGregor and 2015 Dusi Canoe Marathon Champion Andy Birkett took to the raging Umkomaas River and produced a dominant display from start to finish to claim victory at the 2015 STIHL Umkomaas Canoe Marathon handing McGregor his sixth title at the race.

The Jeep Team/Kayak Centre paddler said he was satisfied with the efforts of the pair but he also explained how much he enjoyed the race and with another title under his belt he feels this win was one of his best.

“I had a lot of fun on the river over the two days,” McGregor said. “Andy and I discussed before Dusi about doing the Umko together and it went really well for us and I would definitely rank this win up there with one of my best at the Umko!”

The race was dominated by the pair who finished the first day with a 40 second advantage but increased their lead on the second day to over three minutes over the chasing K2 of Jacques Theron and Thulani Mbanjwa who were unable to bridge the gap on some fantastic water whilst Dave Hamilton-Brown and Wayne Jacobs finished in third overall.

“The water was awesome! It was pretty full on Saturday and with the second day being at a great level of about 1.6 to 1.7 metres which meant that there was no scraping or anything like that on the way down.

“We opted to go for a bigger boat and with the water level it was the right choice and we just wanted to go out there and enjoy ourselves which is what we did which meant that the win was a bonus for us,” McGregor added.

McGregor and Birkett have developed an epic rivalry in recent times and are arguably the country’s top two paddlers so to have them in the same boat caught some canoeing fans by surprise. McGregor said that because 2015 was being dominated by K1 races finding a partner to paddle with was going to be difficult. 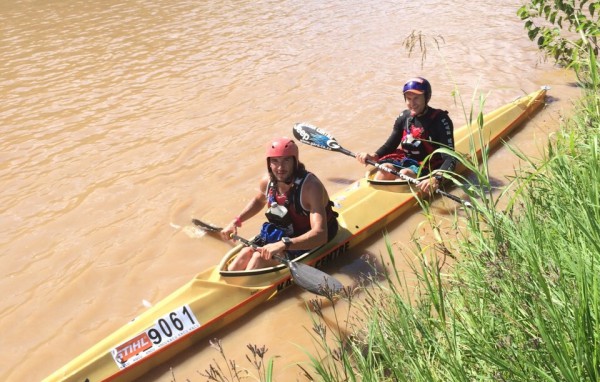 Paddlers were blessed with some brilliant conditions for the 2015 STIHL Umkomaas Canoe Marathon and it was the duo of multiple Marathon World Champion Hank McGregor (back) and Five-time Dusi Canoe Marathon Champion Andy Birkett (front) who won the two-day race. – Bridgette Hartley/
Gameplan Media

“I normally paddle with Grant van der Walt but he has taken a break from paddling to focus on his career and with the K1 season pretty much done it was hard to find someone so I approached Andy.

“He is a great competitor and it was a new adventure for both of us and I sat in the back and shouted encouragement to him in the front and we went really well and had a great time on the river event though we had done very little training together,” McGregor beamed.

It was never a case of running away with the race for McGregor and with his tenth Umko finish he understands that the river can be unpredictable and making sure that you stay out of trouble is the first goal before winning the race.

“The Umko is such a unique race and the river has so many different obstacles that can cause problems and you can go around the first corner and wrap your boat so it is important to keep your wits about you throughout is vital.

“It is always the seasoned crews that you have to be wary of and just making sure that we had an eye on guys like Jacques Theron and Ant Stott was important because they are guys that know what they are doing.

“With that said we had a near faultless race and just made sure that we enjoyed ourselves on the river and I don’t know if Andy and I will paddle again together but I had an awesome time!” McGregor mentioned.

There was a very small ladies field with Natasha Bulbring claiming the honours ahead of the K2 combination of Diana Reitz and Patricia Stannard with Sarah White coming in in third place whilst the junior race was won by Michaelhouse schoolboy Craig Heenan – who was also the first K1 home.