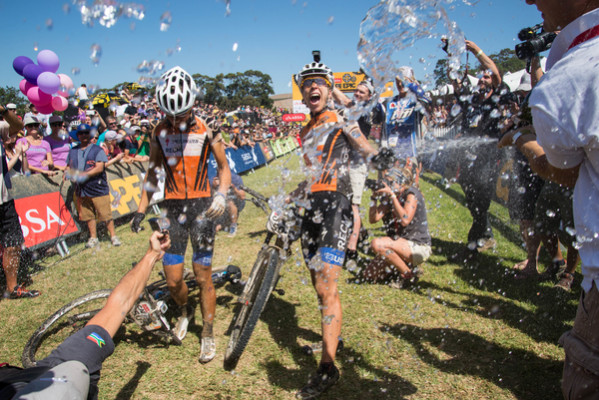 Ariane Kleinhans and Annika Langvad celebrate winning the Ladies Overall division during the final stage (stage 7) of the 2015 Absa Cape Epic Mountain Bike stage race from the Cape Peninsula University of Technology in Wellington to Meerendal Wine Estate in Durbanville, South Africa on the 22 March 2015 – Photo by Emma Hill/Cape Epic/SPORTZPICS

The Absa Cape Epic’s most impressive ever pairing in the Sasol Women’s category started high-fiving spectators 3km from the finish line at Meerandal Wine Estate on the Grand Finale of the 2015 Absa Cape Epic.

From the Prologue to Stage 7, Ariane Kleinhans and Annika Langvad dominated the 2015 Absa Cape Epic with their intensity and world class mountain biking ability.

The pair suffered a minor blip on Stage 2 when they received a 1 hour 13 minute time penalty, but all that did was spur them on to an even more impressive ride for the rest of the race. They made up the lost time in one day and never looked back.

Stage 7 was more of the same, with RECM Specialized taking first place in a time of 4:06.53,8. Ascendis Health pair of Jennie Stenerhag and Robyn de Groot, in her first Absa Cape Epic, came in second yet again with a time of 4:14.16,6. SasolRacing’s Yolande de Villiers and Janka Keseg Stevkova rounded out the Stage 7 podium places, finishing in 4:20.16,5.

With spectators packed onto the field at Meerandal Wine Estate – the host for the Grand Finale for the first time in the event’s history – Kleinhans and Langvad raised their arms in triumph one last time as they popped out of the vineyards and onto the finishing straight.

Their entire support crew waited for them on the finish line, immediately spraying champagne over the 2015 Sasol Women’s category champions before quickly disappearing and remerging with a birthday cake and balloons for Langvad.

“We are very happy,” said Langvad. “This is such a special moment – defending our title, winning again with Ariane and being able to celebrate the victory on my birthday.”

Kleinhans said it was another tough day on the bike, before admitting that she was slightly surprised by the margin of victory for Team RECM Specialized.

“We always wanted to defend our title, but when we saw the quality in the field we didn’t know what to expect. Everything just went so smoothly for us.”

RECM Specialized’s team manager Kandice Buys says both women start preparing for the Epic a year in advance, so winning so convincingly is the happy culmination of preparation and intense focus. It’s Kleinhans’ major goal for the season, so now the champion can take it easy for a while. “I think I’ll celebrate tonight, and then make sure I get a good rest in the next week or two!”

Earlier in the day, the entire field left Wellington with 92km still to ride to Meerendal before completing the 2015 Absa Cape Epic. The major obstacle of the day was a climb up the Paardeberg, a 6km trek that broke the spirit of many finishers, though perhaps not as much as the final climb up Meerandal’s Dorstberg.

Jennie Stenerhag, who had raced at the limit all week, said the new Stage 7 could be the toughest ever. “I thought we were almost done,” said Stenerhag. “I said to Robyn, ‘we must go down now’. And then we just kept climbing. It was a brutal last day.”

In their debut Cape Epic as a team, Ascendis Health achieved more than they expected. “We were originally aiming for a top 5 finish,” said Stenerhag, “so finishing second is brilliant. Congratulations to Annika and Ariane though. Those ladies are something else.”

In an interesting quirk of the race, and thanks to Sasol’s sponsorship of the Sasol Women’s category, Kleinhans and Langvad will actually take home more prize money than the men.

For first place they walk away with R200 000. They also win an extra R5000 for the Prologue and per stage win (seven this year), and they receive R15 000 for each of the Sasol Women’s Hotspots that they won (three this year).