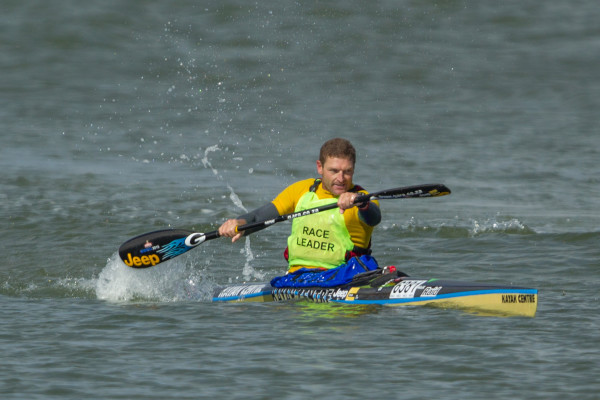 Velddrift – Saturday’s fourth and final stage of the taxing 2015 Berg River Canoe Marathon was a historic day for South African paddling icon Hank McGregor who became the first person in history to win the 240km clash from Paarl to Velddrif for a tenth time while Western Cape local Bianca Beavitt notched up her first women’s crown.

So dominant was McGregor throughout the race’s four days as well as the pre-race time trial, that the only prizes available to the Jeep team/Kayak Centre star to have evaded him were the third and fourth stage bridge prizes.

“To win one is something special, to win ten is something everyone only ever dreams of doing and I’m sure it will only really sink in in a couple of weeks’ time,” said an elated McGregor.

“Its quite a relief to make it through four long days without having any problems and then to win the end sprint from Andrew (Birkett) today to get all four stage wins in a row and my tenth Berg win – I couldn’t be happier!

“I definitely think this was one of the toughest Bergs ever, especially yesterday, but it’s a pearler of a day today and today was one of the best paddlers I’ve ever had,” he added.

Heading into Saturday’s final leg with a handy two and a half minute buffer, McGregor simply had to mark any moves his chasers looked to make as they headed from Zoutkloof to the West Coast fishing town of Velddrif.

A large group of nine paddlers – McGregor and fellow podium finishers Andy Birkett and Kiko Vega included – soon broke free from the rest before the portage at Oordraplek an hour from the finish which saw the race leader surge to the front with just Birkett, Graeme Solomon and Czech Republic’s Jakub Adam able to go with him.

With a kilometer to go and the title all but decided McGregor thanked the three others for the company throughout the race before charging to the finish line ahead of Birkett to complete his Berg fairytale.

“I first went down a stretch of this river when I was six years old and from then on I always wanted to the Berg one day.

“My wife Pippa has supported me the whole way and I couldn’t have done it without her and maybe one day my son Thorsten will come paddle the Berg; for now though this one’s for us.

“I don’t know if I’ll be back but there’s something about this race that seems to keep drawing me back – probably because it’s the toughest race in the world,” said McGregor.

Try as he may, Euro Steel’s Andy Birkett simply had no answer to McGregor’s attack late on the first day which handed the victor the lead that he held up until the final finish line.

“It was disappointing to lose so much time to Hank at the end of day one but it was awesome racing with such great guys and to be a part of things when Hank wins his tenth is amazing,” said Birkett. “Hank is a great athlete and he showed it out there this year through his consistency every single day; he’s done really well to pull off ten Berg victories and it just goes to show what caliber of athlete he is!”

“A lot of the guys on the front bunch have exceled at Marathon World Champs before and it was also great to see clean, tough racing amongst some of the best marathon racers in the world.”

The pair now turn their attention towards preparing for the upcoming ICF Canoe Marathon World Championships in Hungary where they will once again lock horns, this time for global spoils.

“These are some nice miles in the tank ahead of this year’s Worlds,” explained Birkett.

“I’ve still got a few races overseas before some hard work back at home to try improve that end sprint against Hank before we go to Hungary,” he laughed.

Century City/Pink Lady’s Bianca Beavitt kept a firm grip on the women’s race from the outset and the determined competitor charged in to Velddrif unchallenged to claim her maiden Berg title.

“It’s amazing to get to the end and see everyone’s smiles of relief!” said Beavitt. “Coming towards the finish line I just kept saying to myself ‘Don’t cry, don’t cry!’ but it really is such an amazing feeling to be here and to win my first Berg title.

“I feel a bit battered and bruised after these four very long, tough days and I’m definitely booking a massage for this week!” she laughed after finishing 24th overall.

Sadly for Robyn Henderson, who had been in second throughout the opening three stages, a wrong turn down an alternative channel shortly before Kersefontein Bridge resulted in an unplanned and costly portage that allowed Jane Swarbreck to slip through and claim the second step on the podium with Henderson eventually going on to finish third.

While the elite stars battle for their share of the limelight, a little further back in the field Jannie Malherbe made his way to a forty-third Berg finish while the renowned Van Riet brothers – Willem, Enslin and Roelof – formed one of a handful of this year’s relay teams.