Up and up they go at joBerg2c 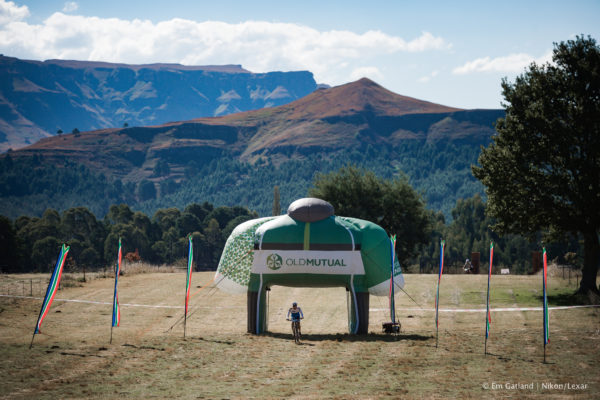 Day 6 of the Old Mutual joBerg2c was a 98km ride from Clifton Preparatory School in Nottingham Road to Glencairn Farm near Himeville. The day featured two big climbs, Gumtree (because it’s said that you’ll sell your bike after riding up it) and Slow Poison (because the forestry road ascending never seems to end).

For the racing elite, Philip Buys and Matthys Beukes rested well at Clifton in Nottingham Road. Today, their fresh legs brought them home two seconds ahead of pre-race favourites, NAD Pro MTB with a time of 3:59:43. Further down the trail was the first of the Lanham-Love Mixed Category power couples, Candice and Darren Lill (dormakaba) with a time of 4:22:06.

Buys and Beukes efforts on stage 6 saw the PYGA riders stay well ahead of NAD Pro MTB overall. The leading pair were fit and healthy on the day and saw no reason to try and extend their 12-and-a-half minute lead.

“We took today as easy as possible. From now on there is some good climbing that suits us and we are looking forward to starting that,” said Matthys Beukes.

“On the first climb today we raced with Nico and Gawie, and then we split up shortly after. But there are so many open roads in between, that it can split us up and bring us back together. In the last kilometres we started racing again and it got quite exciting!” said Beukes.

Buys had a stronger day on the 98km ride, saying, “I feel a lot better today and it was some easy spinning. We didn’t do much, [NAD Pro MTB] did a lot of work. Matthys activated the sprint, but I think NAD also deserved the stage win because they really have been great.

“I had a proper recover day yesterday and the guys from PYGA sorted us out with proper beds so we could get a good night’s rest. So we’re feeling good to look after this nice lead.”

Bell and Combrinck are resilient riders, but today just wasn’t meant to be for the NAD Pro MTB pair.

“We gave it a go in terms of taking advantage of the climbs. That first hill Gawie went at it quite hard and the PYGA guys were drifting away and then they found their legs and caught us,” said Bell.

“When they got to us I began to feel some strain so I took it easy and rode my own pace to the top, and then we all formed a group together with Road Cover and we just rolled on to the finish. There were some surges but no real attacks. We spent a lot of pennies chasing PYGA yesterday, so we didn’t want to overspend today.”

Feeling realistic but undefeated, Combrinck expects a difficult challenge for the remaining days.

“The gap is quite massive and tomorrow’s 80km stage isn’t really a day that you can make up time, but if you make a mistake you can lose a lot of time. It’s a stage that suits PYGA better because it’s very technical with lots of switchbacks. It’s a short punchy route that is pretty fast. So I think it’s going to be fun, but not a day that we can make up much time. Day 8 is the last day, so we have to gun it!”

Dormakaba gets the mixture right

Candice and Darren Lill enjoyed another strong day. Though they entered the race village of Glencairn looking relaxed, Candice said the riding was tough.

“We did well at the start. When you get a bit of a gap on the first climb then you have to just try ride a good pace to keep it. From about 60-80km we just climbed and then even here at the end it’s more climbing. We didn’t want to go too deep but we managed to ride a good pace. There were some tough times but nothing major, it was a good day overall with some sweet trails.”

Her husband Darren is happy to have found some nice consistency after a tough start to joBerg2c.

“I think I’m slowly getting back into it. I struggled a little bit yesterday and I felt a bit better today and I expect to feel better over the next few days as the old legs kick in again.

“The climbing suits us, especially with Candice being such a strong climber herself, so we just rode at our own tempo and managed to gap the mixed teams and ride easy in between. For us, if they come back then they come back – we have a pretty comfortable lead.

Lanham-Love Valencia’s Amy Beth McDougall was out of breathe upon finishing and said it wasn’t easy out there.

“Shoh, today was like a total roller coaster, I mean the dark places I went to today – I can’t even explain. I’m really just so tired! We did a lot of climbing so those descents were absolute heaven – so sublime. So I was switching between ecstasy and retreating into my pain cave! I’m quite strong on the descents so I am already excited for tomorrow. It should be super smooth, super fast single track.”

Day 7 of the Old Mutual joBerg2c is something of rest day – a bright and breezy 80km from Glencairn Farm to McKenzie Club near Ixopo. The day is famous for it’s smooth single track, so riders will go to bed tonight with the prospect of a fun, fast, flowing day to come.