Since its successful launch last year, the challenging 21km route is fast becoming known as a gateway to the other longer distances, and less experienced trail runners and those looking to experience ultra-trail running events, are signing up for the UTCT 21km. We chatted to four runners who did the 21km and can offer advice to those who have entered or are still considering the 21km event this year.

Bianca Tarboton, who won the women’s race in the 2018 UTCT 21km, says the 21km race is ideal for those looking to progress in their trail running and push themselves to longer distances:  “Do it! It’s a really great run and half of the race is really easy, non-technical running so you should be more than capable. UTCT is a really incredible event to be a part of and even if the race is tough, you’ll be energised by the vibe around you at the end.”

She continues, and offers some advice: “I absolutely loved the 21km. It incorporates different terrains which is always so much more exciting and challenging. The first part of the route is very runnable jeep track all the way to UCT. I would recommend taking it conservatively, despite its ease. The climb up to the upper Newlands contour from UCT is short but surprisingly tough (especially if you’ve over gunned it in the beginning). 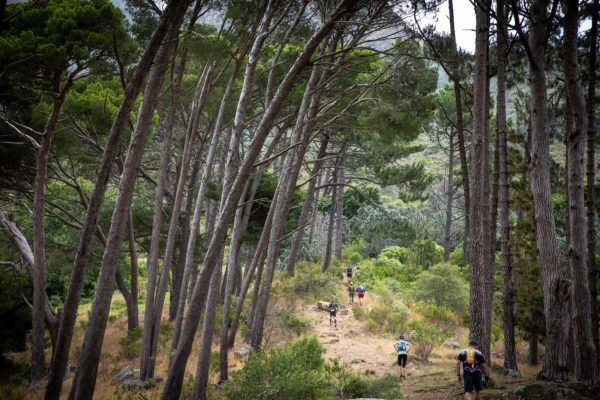 “The single track through the forest to the start of Newlands Ravine is really beautiful but tough –  take it easy, power hike – stop and take in the views as you climb – they’re pretty amazing. Once you get to the saddle at the top of Newlands Ravine it’s all super fun technical downhill to Tafelberg Road and then speedy jeep track to the end. Be careful of tripping on the technical sections (especially because your legs will feel like jelly after the climb) and finish strong!”

Reni le Roux is a Capetonian who used the UTCT 21km as a step-up in distance and will now take on the 35km this year: “I’d been trail running for a while before but I always entered for shorter distances (15km). This was a good challenge as I ran the TMC (Table Mountain Challenge) Lite in September 2018 and wanted to start running longer races.

“It was amazing – the support from the side, the runners who run with you, the views. Make sure you train enough for the big climb, it’s not easy after you’ve been running for at least an hour and a half. The 21km gave me a good idea of how you can push yourself. I’m excited to be part of the Saturday [35km] event this year, and then I’m volunteering on Sunday at the 21km.”

Fareed Behardien, well-known Cape Town trail running blogger and trail fanatic has done the 21km, the 35km and the 65km UTCT events, and says: “The 21km race at UTCT is like no other 21km I’ve ever done before. It will test you, but is such a special experience and a great way to get a glimpse into the world of mountain running. It’s a great way to round off the year! I believe that if you’re capable of tackling the 21km then you’re well on your way to taking on any of the races. The intensity level per kilometer seems pretty consistent across the races for me. So don’t discount your ability if you’re brave enough to enter the 21km. The 35km and 65km are natural step-ups from it.”

A common thread in the advice for those taking on the 21km, Fareed says: “For the first half it’s important to take it easy and just use it as a warm-up. Take your time at UCT [aid station] and fill up both on fuel and mentally. The climb after UCT has shaken many, especially if it’s your first real mountain race. The climbs are always longer than what you expect. From UCT to the top of Newlands Ravine can take an hour for most runners, so pace yourself the entire first half knowing this.

“The fun comes back in full force with the descent from Newlands Ravine to the finish. It is fast and furious and some of my favourite sections on the front face of Table Mountain. Keep some mental fuel for this as there are one or two really technical sections less than 2kms from the end, so you definitely want to keep your wits about you.”

Meg Mackenzie, professional trail runner and coach who placed 10th in the Golden Trail Series last year, ran the inaugural 21km as part of a project where she mentored a 21km first-timer: “The 21km is a tough route and could definitely be used as a stepping stone in moving up in distances at the various other UTCT races. The technical nature of many of the trails around Table Mountain mean that whatever distance you sign up for you should try and spend some time getting comfortable on technical terrain, both going uphill as well as going downhill.”

The route has a bit of everything in it, there are very runnable sections, steep power hiking sections as well as technical descents. If you decide to enter the race now I would suggest trying to mimic the course profile and terrain as much as you can on your weekly long run. Even better would be to get onto the course if you live in Cape Town. If not then I would ensure you have a good base of running mileage and then spend some time each week focusing on power hiking as well as getting comfortable running down technical terrain.

Finally, I would work out your strategy for keeping cool and hydrated. Make sure that you try your best to cool down at the UCT aid station – even something as simple as packing ice into your cap can help keep your body from overheating and slowing down too much in the heat.

One of the big attractions around the UTCT events is the atmosphere and support amongst the runners. Says Fareed: “I really enjoyed the gees last year. There were a lot of runners new to trail on the route, but everyone got completely into it and were willing to help each other when the terrain got tricky or if there were wipeouts etc. It was true trail running and just fantastic out there. You get the same camaraderie as at the bigger UTCT races, just condensed into a shorter time period.”

Bianca Tarboton reiterates the comments about the vibe at UTCT: “The end of the race is really festive and you’ll be welcomed with heaps of cheers. Ringing cowbells and rad music- it’s pretty incredible. In my opinion it really is the perfect route for a 21km and the vibe makes it that much better. I would also really encourage the 21 km racers to support Saturday’s races – it is really inspirational watching the 35/65/100 km runners come through and it makes you that much more amped and motivated for the 21km.”