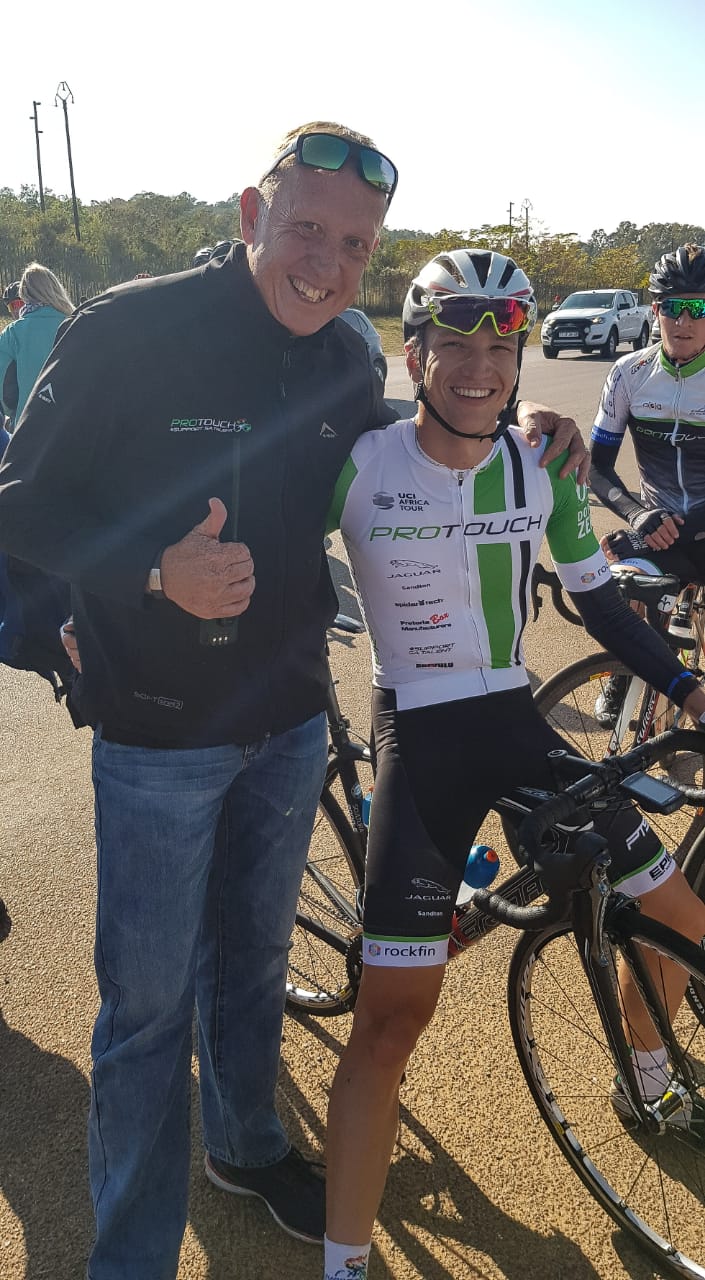 The Pro Touch Continental outfit put in a dominant performance at the inaugural Ultimate Office National Diamond Classic in Pretoria today to snatch first and third with Eddie van Heerden riding away on the final climb to claim a solo victory.

Van Heerden was followed home by Alexander Worsdale (Office Guru) with Kent Main rounding off the podium for Pro Touch in third spot.

Van Heerden finished in a time of 2 hours 32 minutes and 17 seconds over the tough 110km course which saw exciting racing from the gun.

A group of ten riders got away early on, but they were reeled back in the final half of the course. The deciding move came within the final 3km when Van Heerden, Worsdale and Main managed to escape.

Pro Touch made the most of their dominant presence in the escape group and Worsdale was outfoxed into second spot.

“There were various attacks in the final few kilometres, but it was Kent who made the final move and took us with him,” said Van Heerden.

“When I looked back there was nobody on my wheel and I knew the three of us would be in with a shout of staying away. It’s an amazing feeling but the credit has to go to all of my team-mates,” said Van Heerden, who only recently returned to racing following a broken wrist.

“It was a brilliant course which made for tough racing,” said Pro Touch team manager Tony Harding.

“This really is a great victory for Eddie and a great boost for the team before we head to Europe. I was proud of the way the guys controlled the race and managed to get two riders in the final move,” said Harding.

Harding was very complimentary about the route control. “The officials and marshals were excellent. We didn’t feel unsafe at any moment. The metro officers who guided us on their motorbikes were incredible – the best I’ve come across in a long time. These guys can take a bow,” said Harding.

The women’s race was won by an emotional Lynette Burger (Demacon) who has fought her way back to the top step of the podium after a horrific accident eight months ago which almost claimed her life.

“The victory is very special,” she said. “It’s hard to think that it’s just been eight months since the accident and here I am back and winning races. I just kept believing and kept working, so it’s really a humbling moment.”

Burger attacked on the final ascent to the Baviaanspoort Correctional Centre and showed the other ladies a clean pair of heels.

She finished in a time of 3 hours and 11 minutes and was followed home by Carla Oberholzer and and Kim le Court de Billot in second and third respectively.

The route control and marshalling were stand-out features of the event and it was clear the race had significant backing from the Tshwane Metro. “We can’t thank them enough,” commented race organiser Mauritz Meyer. “It was heart-warming to see their presence on the road. This support for cycling certainly proves that the Tshwane Metro is serious about growing the sport.”