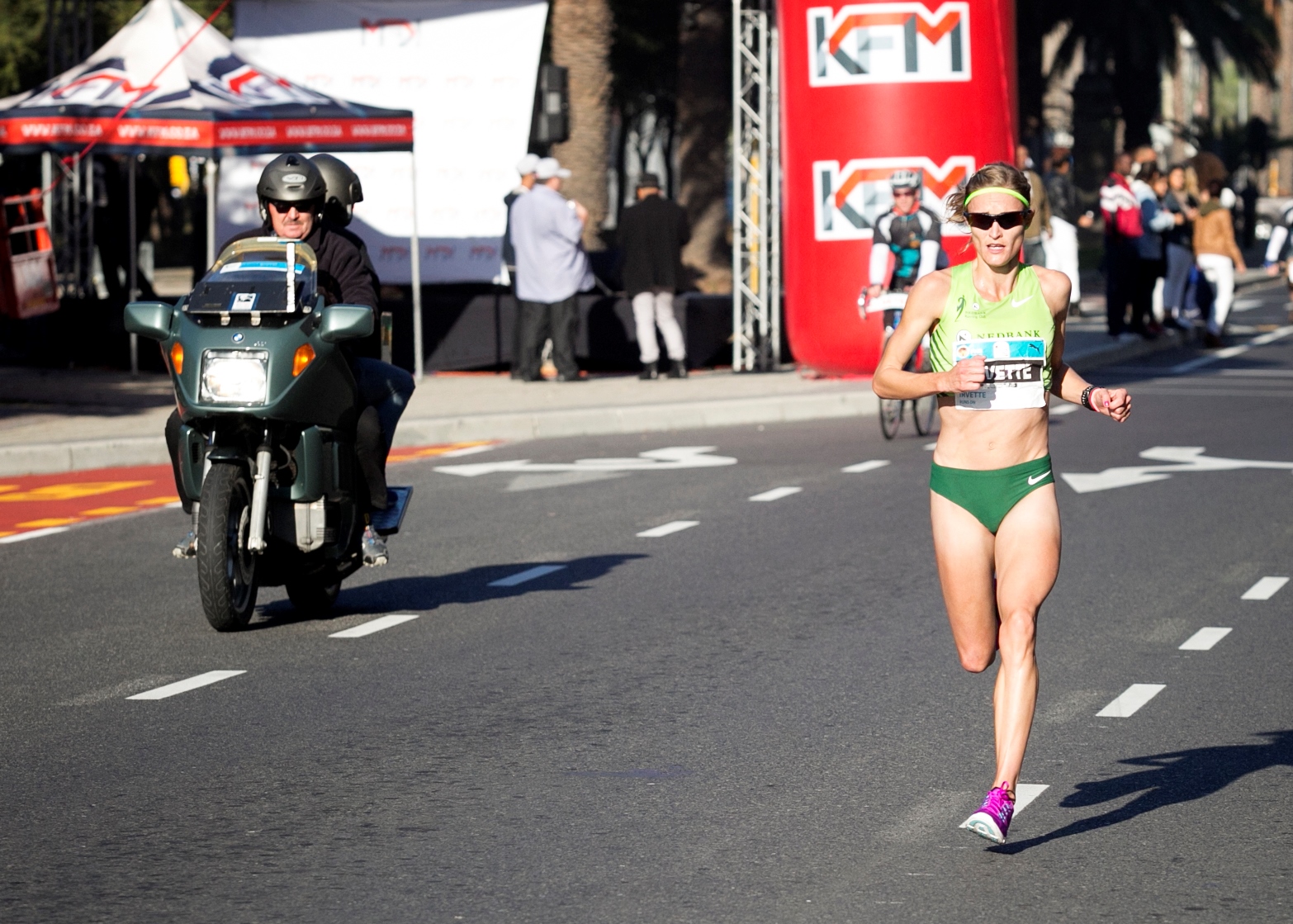 Fresh off of her third place finish at the Two Oceans Marathon where she made Ultra debut, Irvette van Zyl has confirmed her entry into the 2019 running of the FNB Cape Town 12 ONERUN on Sunday, 19 May. Seen here: Irvette van Zyl in action during the 2016 FNB Cape Town 12 ONERUN where she claimed gold in 39 minutes 40 seconds. Photo Credit: Mark Sampson

Fresh off of her third place finish at the Two Oceans Marathon where she made Ultra debut, Irvette van Zyl has confirmed her entry into the 2019 running of the FNB Cape Town 12 ONERUN on Sunday, 19 May.

A former champion here in one of the fastest times set on the 12km course, van Zyl has every intention of getting back to her speedy ways that saw her dominate the 10km and marathon in the latter half of 2018.

Van Zyl twice broke her 10km best time in 2018, first in September where she clocked 32:49 on 23 September, and then narrowly missing out on breaking 32minutes, when she finished third at the FNB Durban 10K CITYSURFRUN, crossing the line in 32:05. She then went on to smash the Soweto Marathon course record in November last year, running 2:33.43 on a brutal course that hits almost 1800m of altitude. Small wonder then, that many believe that van Zyl is South Africa’s best 10km to the marathon at this point.

It remains to be seen though just how much her legs have recovered from her efforts at the Two Oceans, in particular the bone jarring descent down Ou Kaapse Weg. Van Zyl is tough, she has proved than time and again and she has big ambitions in clocking a fast half marathon in July this year to get into Gold Label Status. That will take some doing, so van Zyl will be looking to get her speed up, and quickly. And that has dangerous implications for the rest of the women in the field come 19 May.

“My quads were really sore after Oceans. But that is out of the way now. I have immense respect for Ultra runners, but now I need to get speed up again if I want my Gold Label Status back. So the FNB Cape Town 12 ONERUN fits in perfectly with my plans.”

Van Zyl won the race in 2016 with a time of 39.40, only six athletes have gone faster, four of which are international athletes. And while it may be a tall order to expect her to challenge for the podium on race day so soon after her Ultra experiences, van Zyl is simply not someone you write off. With no pressure on her, she may just spring a surprise. Already announced are Kesa Molotsane and Glenrose Xaba who are also running into great form, with Xaba winning the 10 000m at the Sizwe Medical Fund & 3SixtyLife ASA Senior Track & Field and Combined Events Championships (SA Championships) on 27 April and Molotsane fairing the best out of all the South Africans at the World Cross Country Championships in March.

Charity Support: When entering online, runners can choose to make a monetary donation towards either or  all four of the FNB Cape Town ONERUN Charities: 1. help2read, 2. Cotlands, 3. Die Burger Kinderfonds and 4. The Cape Of Good HopeSPCA.

This year each event charity has also been allocated x100 entries which will be available atR500 each. When entering online, runners can choose this specific entry option. The proceeds will go directly to the selected charity.

FNB is proud to once again bring you the FNB Run Your City Serieswhich comprises of three unique mass participation events that integrate business involvement, family, diversity, investment in community, world class achievement and fun for all participants, both individuals and businesses alike.